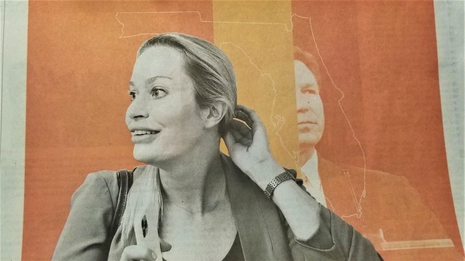 Christina Pushaw, the press secretary for Florida Gov. Ron DeSantis, drew a long-awaited negative profile in The Washington Post on Wednesday morning. In the Thursday paper, the headline was “This press secretary makes sure reporters feel the burn.” The subhead added Pushaw “uses taunts to solidify tough image.”

Post media reporter Paul Farhi started with Pushaw’s taunting tweet from the Florida GOP “Sunshine Summit” last weekend. "My message to them is to try crying about it. Then go to kickboxing and have a margarita," she tweeted mock-quoting then-White House press secretary Jen Psaki. "And write the same hit piece you were gonna write anyway."

In the 14 months since joining DeSantis’s staff, she has transformed the typically button-down role of gubernatorial press secretary into something like a running public brawl — with Twitter as her blunt-force weapon. Her usual targets: Democrats, the news media and anyone else she deems insufficiently supportive of DeSantis’s agenda and her own conservative politics.

He scare-quoted Pushaw calling the Post "the Pravda of D.C.," Chelsea Clinton a "grifter," and Biden as a "seemingly senile 79-year-old aspiring dictator." As if the Post didn't imply the Trump kids were grifters and that Trump was an aspiring dictator. Oh, and she dared to say national news organizations were "slobbering regime sycophants." The Post didn't take offense when Biden and his press secretary described Peter Doocy as a "stupid son of a bitch."

Some of the Florida "experts" offered weird hot takes.

She declined an interview request and suggested to her Twitter followers that The Post was trying to blackmail her by writing this profile, although she ultimately offered limited cooperation with the reporter.

Some think Pushaw’s aggressive persona is strategic, acting as a kind of heat shield for DeSantis. “She’s the Dennis Rodman of Florida politics,” said Peter Schorsch, the publisher of FloridaPolitics.com, referring to the NBA player who taunted his opponents to throw them off their game.

This obviously not the Dennis Rodman that played footsie with North Korean communist dictator Kim Jong-Un. But the Rodman thing wasn't as wacky as claiming DeSantis isn't a regular target of the liberal media:

“This governor has used his communications team more like a campaign-style operation than a public-information operation,” said Mary Ellen Klas, a reporter for the Miami Herald who has covered six Florida governors. “They view reporters as their enemies. They are more antagonistic to reporters just by default, and often without cause.”

Sure. This is the same Mary Ellen Klas who runs down DeSantis with Stephanie Ruhle on MSNBC.

This is the same "newspaper" that tried to make a "fake news" scandal out of DeSantis renting a list from the Babylon Bee.