On Friday morning, syndicated conservative talk-radio host Chris Plante mocked the daily editorial cartoon in The Washington Post, and it was a doozy. Staff artist Michael De Adder thought it was appropriate and humorous to suggest Florida Gov. Ron DeSantis was basically a murderer, that his so-called "Don't Say Gay" bill would mean death for children deciding they're transgender. 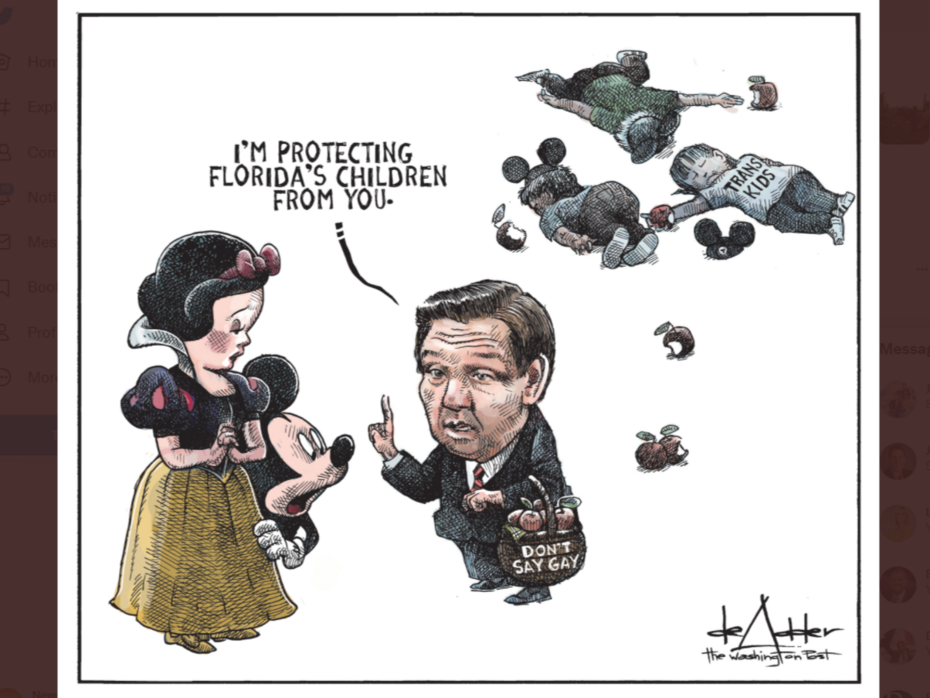 It had echoes of Herb Block ("Herblock"), the legendary leftist Post cartoonist. DeSantis was carrying a bag of apples labeled "DON'T SAY GAY," which were poisoned, since behind him were three dead children (one with mouse ears) that were labeled "TRANS KIDS." Referring to his opposition from Disney, DeSantis says to a sad Snow White and a horrified Mickey Mouse "I'm protecting Florida's children from you."

The overwrought lie that conservatives and Republicans are killing people by opposing every new invention of the transgender agenda -- like letting men compete in women's sports -- isn't always promoted by the Post. On Thursday -- the previous day -- the Editorial Board lamented students at the University of Virginia wanted to cancel a speech by former Vice President Mike Pence because that would "threaten lives"!

Last year, U-Va.'s Board of Visitors affirmed its commitment to free expression in endorsing a statement specifying that education itself “requires freedom to speak, write, inquire, listen, challenge, and learn, including through exposure to a range of ideas.”

Sadly, that “range of ideas” is apparently too broad for some at U-Va., including at the campus newspaper, the Cavalier Daily, which said in an editorial that Mr. Pence “is not entitled to a platform,” citing his record on issues concerning LGBTQ individuals, minorities and immigrants. His appearance, the paper said, “threatens the lives” of students and others on campus.

In fact, Mr. Pence has spoken at scores of universities, to the detriment of no one’s safety.

We happen to agree that Mr. Pence, a former congressman and governor of Indiana, has been deeply wrong on many issues, including the ones cited by the student paper. Intolerance has been a theme of his politics. But to deny him a forum on that basis — not least at a taxpayer-funded university — is to sanctify intolerance of a different stripe, equally toxic, and dress it up as existential concern. Mr. Pence should be heard.

The headline on Friday's cartoon was "Magic Mirror on the wall, who is the Trumpiest one of all?"