PolitiFact has jumped into evaluating the contentious Pennsylvania Republican primary to succeed Sen. Pat Toomey. They've haven't gone easy on the celebrity in the race, Dr. Mehmet Oz. But for some reason they jumped on Dave McCormick for a negative ad on abortion which demonstrates the dramatic flip-flop Dr. Oz has very recently taken on abortion. McCormick drew a "Mostly False" for claiming Oz is "pro-abortion."

The minute-long video opens with a clip of Oz in a Senate debate saying: "There isn’t, to my knowledge, evidence that I’m not ‘pro-life.’"

Then there are clips of Oz talking about abortion in a radio interview that the ad labels, "Evidence from 2019."

The ad ends with these words on the screen: "Mehmet Oz. Pro-abortion. Anti-life. Hollywood liberal."

Politicians often use "pro-life," "pro-choice" or "pro-abortion," even though the labels lack precise meanings.

If they "lack precise meanings," why is PolitiFact involved here in finding it "Mostly False" to expose Oz? And if they are precise, why not fact-check Oz claiming there's no evidence he's "not pro-life"? The ad shows that's phony.

Kertscher explained that Dr. Oz appeared on the talk show "The Breakfast Club" and "he spoke in favor of access to the procedure. But he also said he was personally opposed to the procedure and would advise his family members against having one." This is similar to many Democrats like the late Mario Cuomo, who said they personally didn't favor abortion, but could be categorized as favoring a "right to choose."

A host on the show said she feared that women would seek dangerous illegal abortions. 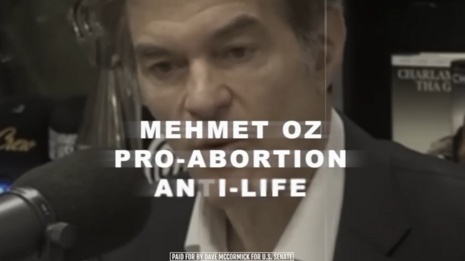 "As a doctor, just putting my doctor hat on, it’s a big-time concern," Oz said. "Because I went to medical school in Philadelphia and I saw women who’d had coat-hanger events. They’re really traumatic events that happen, when they were younger, before Roe v. Wade. And many of them were harmed for life. Emotionally, there’s scarring anyway...."

Oz warned that Alabama’s law could have economic consequences, saying, "You want to ban abortion, make that loud and clear, but there’s going to be a big sucking sound of businesses leaving there."

"If someone deep in their heart feels that the moment of conception is a human life, and they just can’t deal with that life being harmed, they got to be heard, they can’t get ignored. But that doesn’t mean that’s what the rule of the land is."

All of this makes Oz sound like a typical Democrat. In a Republican primary, this is damaging. It's not "pro-life" to say "I'm personally opposed to abortion, but would never make it the law of the land."

Kertscher concluded the ad is "mostly false" because it "misleads voters about the positions Oz said he would hold as an elected leader."

Okay, it doesn't include Oz's current Mehmet-Come-Lately promises. But the feeling you get is that PolitiFact doesn't like advertisements brandishing the word "pro-abortion," and it really loathes conservatives pointing out when people advocate the "right to choose" extending up to birth.

PS: You can see the abortion part of this show here (I cued it up):

Oz said “I think the rule that most Americans seem to support is, if the child is viable outside the womb, then you don’t want to kill that child. If the child was not going to survive outside the mom, then the mom runs the show.”

Then he punts the whole issue: “Is this how we want to spend our time? There’s so much we have to face in the world…we have so much we’ve gotta do to take care of each other. To start picking fights on this?”