The “fact checkers” hate it when abortion opponents highlight how Democrats are in favor of abortion at all times – including “finishing off” the baby after failed abortions a la Ralph Northam. On Thursday, PolitiFact’s Sara Swann tagged Lila Rose of Live Action as “False” for this claim:

“Colorado Governor Jared Polis has just signed into law a bill legalizing abortions through all nine months, up until the moment of birth."

BREAKING: Colorado Governor Jared Polis has just signed into law a bill legalizing abortions through all nine months, up until the moment of birth.

Here’s the problem with Swann and PolitiFact. There is no time limit on abortions in this law, which means, ahem, “up until the moment of birth," as they explained: 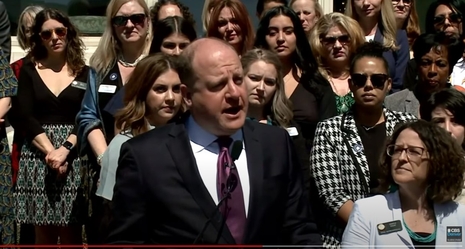 The Reproductive Health Equity Act that Polis signed into law this week affirms an individual’s right to contraceptives and an abortion. It says that a government entity may not "deny, restrict, interfere with or discriminate against an individual’s fundamental right to use or refuse contraception or to continue a pregnancy and give birth or to have an abortion."

Colorado’s law protects the right to have an abortion and does not make distinctions or regulations around a time or stage during pregnancy.

So Lila Rose is True, and PolitiFact is False.

As the fact checkers often do, the “missing context” is few women get abortions in the third trimester – which doesn’t in any way establish that the claim is not factual.

Colorado's new law guarantees an individual's right to contraceptives and an abortion. It does not allow abortions "up until the moment of birth."

More in my latest fact-check for @PolitiFact ⤵️https://t.co/BbE4nESwFH