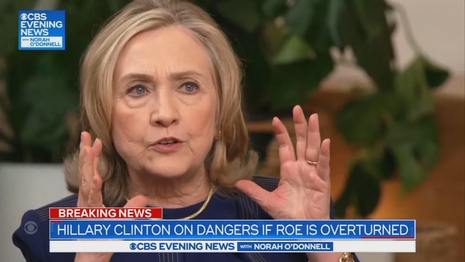 The leak of a Supreme Court draft curtailing Roe vs. Wade created a long liberal media freakout. Everyone from the Founding Fathers to today's Republicans were ripped for "extreme" hatred of women.

A parade of liberal guests marched across the networks. Hillary Clinton was interviewed on the CBS Evening News where she complained that she tried to warn voters that Trump was going to pander to an "extreme faction" of pro-life conservatives.

Rep. Hakeem Jeffries claimed on MSNBC that liberals were for "freedom," and conservative were for "tyranny." Conservatives were a "cult" trying to impose their own values on women.

The fact checkers aren't checking these, or President Biden claiming the Republicans will next segregate school children to remove the "LGBTQ kids" from classrooms. The fact checkers mostly take exception to claims that the Democrats don't like, like the idea that they favor abortion up until birth. They tried to claim that was "false" -- because few abortions take place in the third trimester.