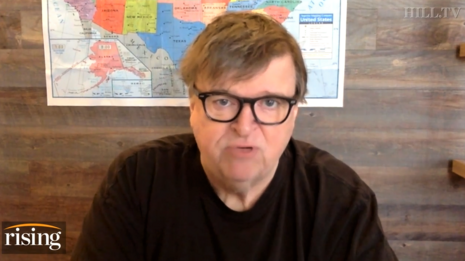 In the days after 9/11, one of the harshest critics of President Bush was, predictably radical mockumentary maker Michael Moore. Now, on the day before the 20th anniversary of 9/11, Moore gave an interview to The Hill to promote yet another airing of his nasty film Fahrenheit 911 and bizarrely praised Joe Biden's exit from Afghanistan "with such grace and precision and safety."

Has he been in a cave?

Here's what Moore said in 2001, which earned our "Blame America First Award" at the end of the year:

"Am I angry? You bet I am. I am an American citizen, and my leaders have taken my money to fund mass murder. And now my friends have paid the price with their lives.

"Keep crying, Mr. Bush. Keep running to Omaha or wherever it is you go while others die, just as you ran during Vietnam while claiming to be ‘on duty’ in the Air National Guard. Nine boys from my high school died in that miserable war. And now you are asking for ‘unity’ so you can start another one? Do not insult me or my country like this!

Did Michael Moore ever serve in the military? No. He graduated high school in 1972, and didn't last a year in college, but unsurprisingly avoided  those "mass murdering" armed forces.

Did Joe Biden serve in the military? No. He graduated from college in 1965, but didn't even attempt being "on duty" in the National Guard. Moore thinks he's a fantastic politician and commander-in-chief:

MOORE: We have a president who’s kept his word. None of this is surprising. He told us all of us during a year-long campaign he was going to do this. And it’s kind of rare to have a politician once elected to actually do what they said they were going to do. In this case remove our troops from Afghanistan and end our war there.

So he has done that and he’s done it in a way that -- I'm still flabbergasted that he pulled this off with such grace and precision and safety. Everything that we've been told by the media, the mainstream media, by pundits who did nothing but spend weeks criticizing his exit from Afghanistan. I don't get it.

Everything was safe? What about the bombing by the airport? Moore treated that as an ISIS thing, not a Biden thing or a Taliban thing.

MOORE: We did have loss of life with a random, vicious terrorist attack by ISIS. But whatever Biden negotiated, everybody kept their word. We left on the day we said we were going to leave, in fact we left the minute before that day, and the Taliban stood by and helped us leave.

Moore doesn't seem to care there were more Americans and Afghan allies left behind. He seems more concerned with giving Biden an A-plus-plus!