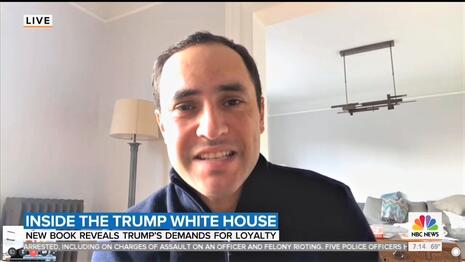 The conservative and conservative-leaning half of the country might suggest the liberal press beat the dead horse of the Trump-and-Russia issue into a fine paste. But on Monday’s Today, NBC substitute co-host Willie Geist brought on New York Times reporter Michael Schmidt to promote his new book, Donald Trump v. The United States.

They discussed Schmidt's big point about an out-of-control president, as the book jacket gushes: "What do you do, and who do you call, if you are the only one standing between the president, his extraordinary powers, and the abyss?" His book "tells the dramatic, high-stakes story of those who felt compelled to confront and try to contain the most powerful man in the world as he shredded norms and sought to expand his power."

MICHAEL SCHMIDT: So a lot of what's gone on with Russia is probably hard to understand for the average person. One of the biggest questions is Trump's ties to Russia, his longstanding personal and financial ties. So what has been looked at is -- The FBI in 2017 opened up a counterintelligence investigation to the president. They believed there needed to be a deep examination of the president's ties to Russia. Were there business dealings or personal relationships that went back decades that could be potentially compromising him? But what happened in the end is that despite all the things that have been looked at about the president, this issue never got the full examination from the Mueller investigation that many people probably thought that it did.

What happens is that after this investigation is over, the top Justice Department official overseeing the FBI looks at this, and believes it is a fishing expedition, and doesn't believe something as robust as this should go on and it makes it harder for FBI counterintelligence investigators to ultimately dig deep into that question. And as we head into the election here, from the public standpoint, there still has never been a full accounting of the president's ties to Russia. There was a Senate report a few weeks ago. But that, as many senators on the panel, the intelligence committee panel from the Senate said, it only scratched the surface.

One of Schmidt's on-the-record sources for this lament is fired acting FBI director Andrew McCabe, who was was fired from the top of the FBI for…lying his face off to the FBI about all his anti-Trump leaking to reporters. McCabe’s book in 2019 created headlines like this, from a CNN interview: “McCabe: It’s possible Donald Trump is a Russian agent.” We called him "the Justice Department's Jussie Smollett."