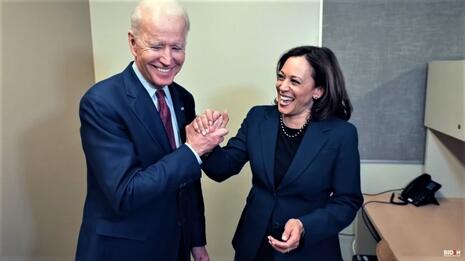 People magazine has spent four years energetically avoiding the Trump family like they were dreadfully infectious. Lefties screeched at a half-nice cover story on the Trumps right after the 2016 election. Now they’re back in familiar Democrat-pleasing mode in this week’s Joe Biden-Kamala Harris interview. There’s not one whiff of policy in the two pages of questions and answers in the August 31 issue. But Biden is quoted offering the usual lying smear that President Trump called Klansmen and neo-Nazis “very fine people.”

To borrow from The Washington Post, this is becoming a “Bottomless Pinocchio” for Biden. He never stops lying and smearing:

Biden: The easy part of this is like my relationship with Barack — we trusted each other. Think about what happened when those folks came out in Charlottesville, carrying those torches. Close your eyes and remember what you saw, chanting the same anti-Semitic bile that was chanted in the streets of Germany in the ’30s, accompanied by the Ku Klux Klan. And a young woman gets killed protesting against them and the president of the United States says, “There are very fine people on both sides.” That phrase was heard 'round the world. This is going to change.

Biden: This is who we are [gestures to Harris next to him]. This is America.

This was the actual headline on the first two pages promoting Biden and Harris: "THIS IS WHO WE ARE -- THIS IS AMERICA."

The headlines and the quotes here promote Kamala with overflowing sap: “A BARRIER-BREAKING JOURNEY,” and “COOKING FEEDS HER SOUL,” and this quote in all caps:

"YOU'RE SO DAMN SMART, YOU’VE BEEN SO DEEPLY INVOLVED.” – Biden to Harris during People interview.

These were the questions Adam Carlson offered in the People pages:

Senator Harris, what was it like to get the job offer?

The two of you went head-to-head in the primary race. You’ve talked about not holding grudges... (That’s how it ended.)

Senator Harris, are you going to be the kind of VP tell him when he’s wrong?

How do you stay in touch? Calls? Texts?

That last one is the question that somehow spurred Charlottesville smears.

This is yet another example of why no one should consider media criticism as "working the refs." These people aren't referees. They aren't fair, they aren't balanced, and they want one side to win, very badly.