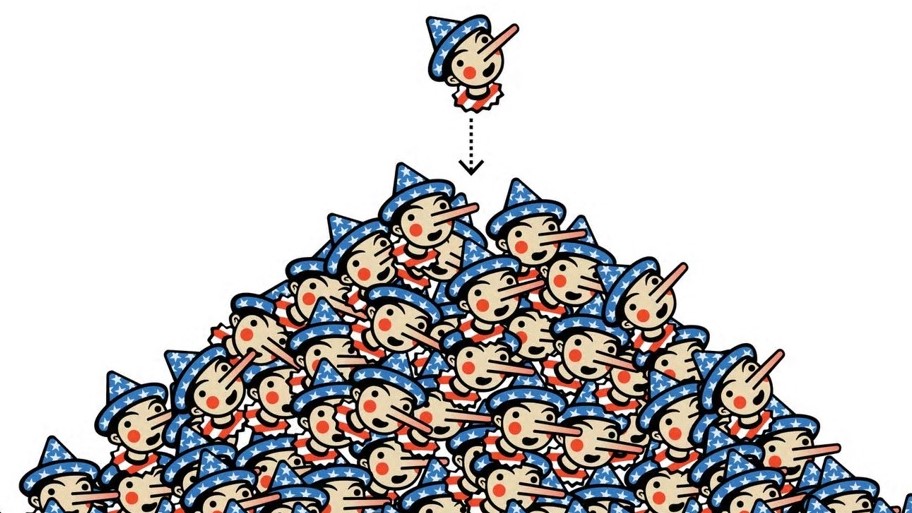 Robert Mueller’s report finding no collusion between the Trump campaign and the Russian government has caused problems for the “fact checkers.” Take the Washington Post “Fact” cops. Their most recent claim is that Trump is guilty of 9,179 “false or misleading claims.” Guess what’s the most repeated claim they have penalty flagged on their database page:

This page now carries an update:

But a summary of the special counsel's report, released by Attorney General William Barr, concluded the investigation "did not establish that members of the Trump Campaign conspired or coordinated with the Russian government in its election interference activities." The special counsel defined “coordination” as an “agreement — tacit or express — between the Trump Campaign and the Russian government on election interference.” [Emphasis mine.] 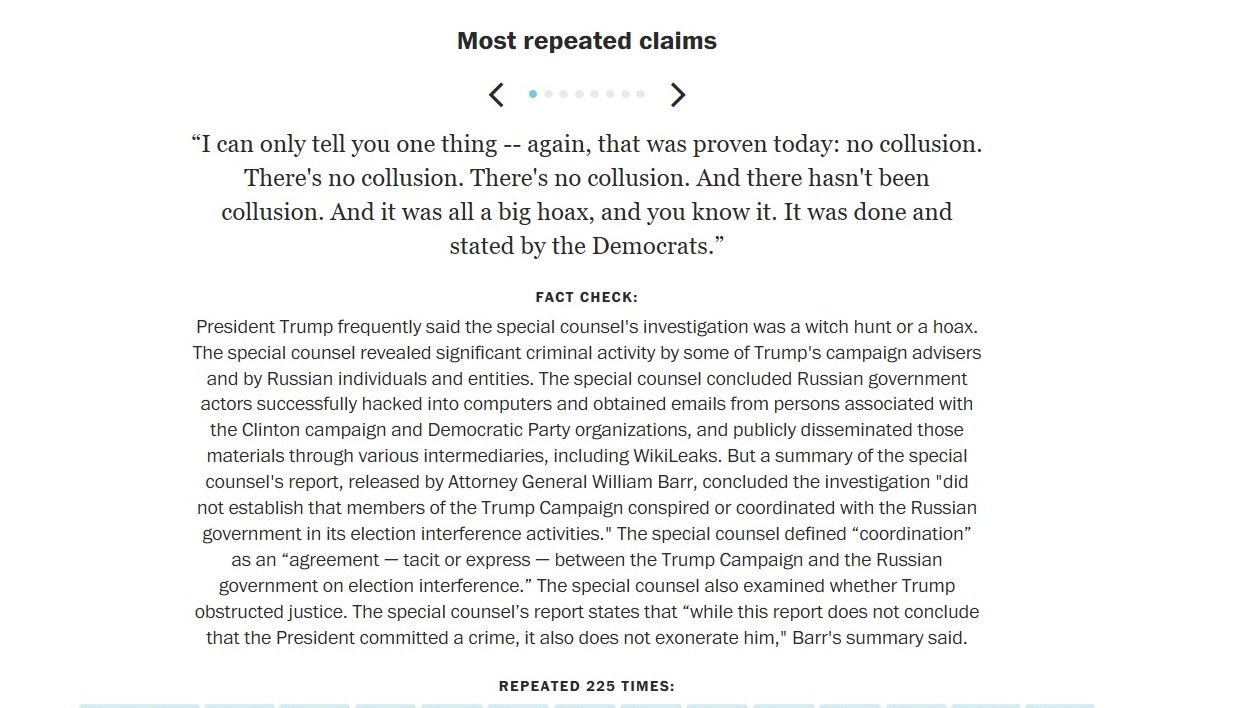 So why don’t the “Fact Checkers” revise and remove these hundreds of statements from the False list?

In an e-mail response, Kessler explained to NewsBusters:

That 225 figure refers to claims regarding the Russia probe, it does not refer to claims about “no collusion.” We frequently update our fact checks in light of new information. The specific quote you are referring to has to do with his claim of collusion by the Democrats. So I believe it is still valid to include in our database. Our inclusion of these claims were specific to his claims that the investigation was phony, illegal and so forth. He may have tossed in the phrase “no collusion” but that was not the whole quote.

So we followed up, asking: If the 225 "false" flags aren't for this precise quote, isn't it quite logical that most Post consumers would think he said a version of this "no collusion" quote 225 times? "Yes, that's a fair point," Kessler replied. "It started as a way to indicate a repeated claim related to the Russia investigation. But now I think it adds confusion, especially in light of the Barr letter. I am examining whether to recode some of the material for the next update."

So what about Democrat collusion? On December 10, Kessler created a new gimmick called the “Bottomless Pinocchio,” invented largely to mock Trump, suggesting Trump doesn’t stop using a claim he likes just because the “fact checkers” cried foul. In a video accompanying the post, Kessler called it "disinformation, or propaganda." Democrats colluding with Russians is a “Bottomless Pinocchio,” according to the Post patrol:

Another campaign claim that has carried into his presidency is the assertion that Democrats colluded with Russia during the election (48 times). This is obviously false, as the Democrats were the target of hacking by Russian entities, according to U.S. intelligence agencies. (The assertion, also spread widely by Trump allies in the conservative media, largely rests on the fact that the firm hired by Democrats to examine Trump’s Russia ties was also working to defend a Russian company in U.S. court.)

This linked to a February 2018 fact check on No Democrat Collusion, in which Kessler slammed "Four Pinocchios" on Rep. Devin Nunes: “Finally, there is no evidence that Clinton was involved in Steele’s reports or worked with Russian entities to feed information to [Christopher]Steele. “

Wait: The Post broke the story on October 25, 2017 that Clinton campaign lawyer Marc Elias hired Fusion GPS, who hired Christopher Steele. Kessler admitted all this, but said you can't somehow connect that to Hillary: "it’s a huge leap to say Clinton colluded with Russians to do this. Instead, you have (a) the campaign hiring (b) a research firm that hired (c) a researcher who spoke (d) to Russian sources."

When the Clintons do something via six degrees to avoid blame, the "fact checkers" are on board.

We asked Kessler "Were you claiming that the Clinton campaign funding Steele through a law firm and an opposition-research firm is not 'involved in Steele's reports'?"

Kessler defended himself by splitting hairs: "As for Clinton being involved in the Steele report, I am unaware of any evidence that Hillary Clinton was involved in Steele’s reports or even knew of them. In your note, you changed it to 'Clinton campaign.' That’s not the same thing."

But in his "Bottomless Pinocchio" article, Kessler said it was "obviously false" that "Democrats colluded" (not just Hillary) to get oppo-research "dirt" from the Russians.