Many people are taking the hashtag #NotMyPresident seriously, believing that any endorsement or recognition of Donald Trump’s new role is an acceptance of the man himself.

This stance became increasingly clear after People promoted their November 21 issue on Twitter. A by no means flattering picture of Donald Trump graced the cover of the magazine, captioned by: “President Trump: His life, his family and his astonishing journey to the White House.” The body of the tweet read: “He’s hired! Donald Trump is elected the 45th President of the United States in stunning upset.” 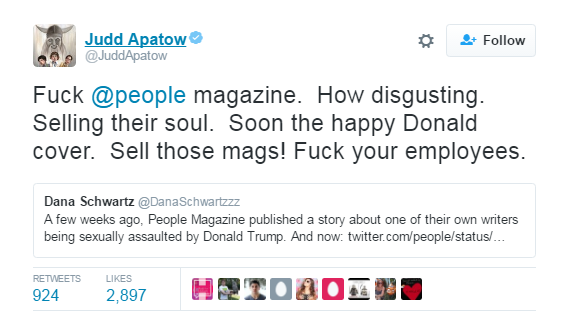 Other celebrities agreed, criticizing the magazine for betraying one of its own writers who accused Trump of sexual harassment. Zoe Kazan took to Twitter with ire, encouraging her fellow Hollywood stars to “#BOYCOTTPEOPLEMAGAZINE.” “Celebs: do not give them your interviews or sell them your pictures,” she wrote. “Readers: do not give them your money. This matters.” Then, the actress linked to a NY Mag article which accused People of "shameless Trump-family pandering."

In response to the furor, a People spokesperson explained that “Donald Trump’s win is a history-making news event that warranted the cover of the magazine.” The rep continued: “The story is not a celebration or an endorsement and we continue to stand by Natasha Stoynoff, whose account of being attacked by Trump in 2005 is recounted in this week’s cover story.” 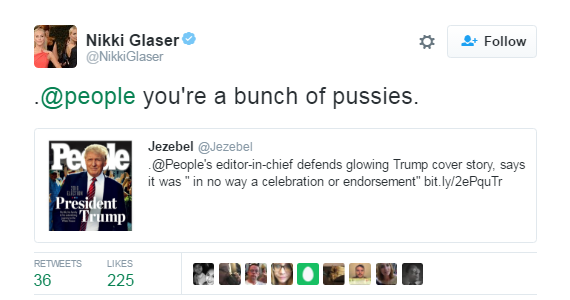 This explanation did not satisfy stand-up comedian and TV host Nikki Glaser. Retweeting a post that linked to a stinging Jezebel invective about the "f--king surreal" writeup, Glaser added her two cents: “@people you’re a bunch of pussies.”

Observer arts and culture writer Dana Schwartz went further, opining that the magazine’s tweet about the cuteness of Ivanka Trump’s family was out of line because of the Natasha Stoynoff incident. Slate and Elle writer Elissa Strauss also labeled the magazine “amoral” for “fawning over how ‘cute’ Trump’s family is.”

However, prior to the election results, People’s pro-liberal bias was clear. In the election weekend issue, a Hillary Clinton interview revealed softball questions about such topics as the candidate’s coping mechanisms and her thoughts on being the first female president.

In the end, Donald Trump is the President-elect, whether the media world likes it or not. So yes, news coverage is to be expected.