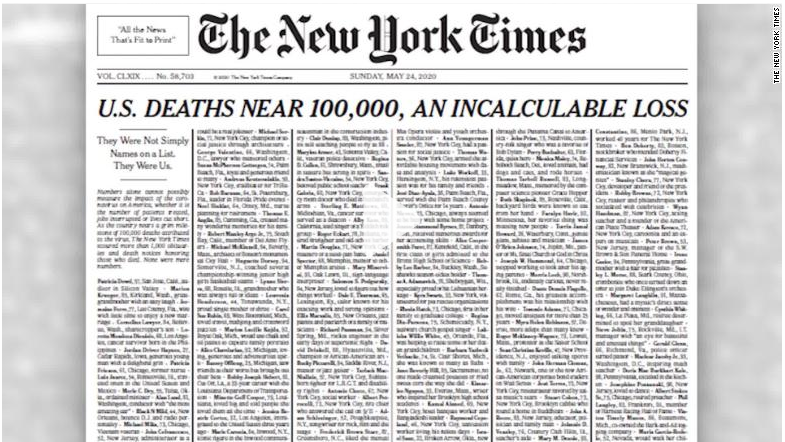 On May 27, the American death toll from coronavirus sunk into the six figures: 100,000 lives lost. That’s a very sad number, made sadder when we ponder that the virus prevents loved ones from saying goodbye in person, and makes any funeral an extremely small event.

The nation’s largest national newspapers have all made dramatic front pages out of the number. The New York Times came first on Sunday, filling their entire front page and three more pages with names of the victims. USA Today followed on Wednesday with an entire front page in black, with photos of the dead. The Washington Post waited until the horrible number was true, but still printed some actual news stories on the front page.

In the Post, Marc Fisher brought the usual emotional language to the milestone. It “slipped by like so many other days in this dark spring, one more spin of the Earth, one more headline in a numbing cascade of grim news.” It’s hardly “slipping by.” They’ve made sure of that.

CNN promoted each and every one of these performative pages, which strongly enhanced the notion that this wasn’t just a number. It was a political strategy. Each of these newspapers and CNN haven’t just reported on President Trump, but have cast him as a dangerous man who should be removed from office long before he had a chance to campaign for re-election.

It’s the same strategy callously projected by Politico writer (and CNN analyst) Ryan Lizza, who asked White House press secretary Kayleigh McEnany: “We’re about to cross the 100,000 dead American [sic] milestone… on Election Day, what does the White House view as the number of dead Americans where you can say that you successfully defeated this pandemic? Is there a number?” 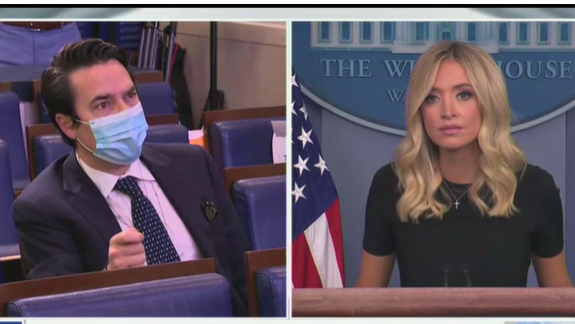 He didn’t ask this once. He kept repeating it. The implied message: the White House should be too embarrassed to ever claim victory, to ever claim it did something right, that it could have been worse, that they listened to the experts and took action.

You can’t merely grieve in a vague way for the 100,000. They have to be trotted out as talking points, as Public Rationale Number One for removing Trump from office in November.

Lizza’s reporter girlfriend Olivia Nuzzi tried this tactic first, in a more baldly political way, asking Trump directly a month earlier: “If an American president loses more Americans over the course of six weeks than died in the entirety of the Vietnam war, does he deserve to be re-elected?”

CNN loves this line of attack questioning from this Sonny and Cher of smears. In April, Brian Stelter interviewed Nuzzi and Lizza, sitting in front of their fireplace, and only wondered “Why was that question important to ask?” Apparently, it’s important to always imply to the public that Trump’s incompetence killed tens of thousands of people. (Adam Schiff was even blunter, suggesting a successful impeachment effort would have saved many lives.)

Lizza’s answer to Stelter looks even phonier now than it did then. He complained the right-wingers think these questions are “all somehow showboating, or not real journalism. And that’s just wrong, and that’s never been the case since I’ve been covering the White House.”

With a straight face, he claimed it’s “never been the case” that reporters have showboated in the briefing room or the Rose Garden. That’s a lie, and then he added to that lie with further showboating.

We can all lament this death toll, but some clearly are beating their breasts in the most opportunistic way imaginable. It doesn’t honor the victims. It merely exploits them.