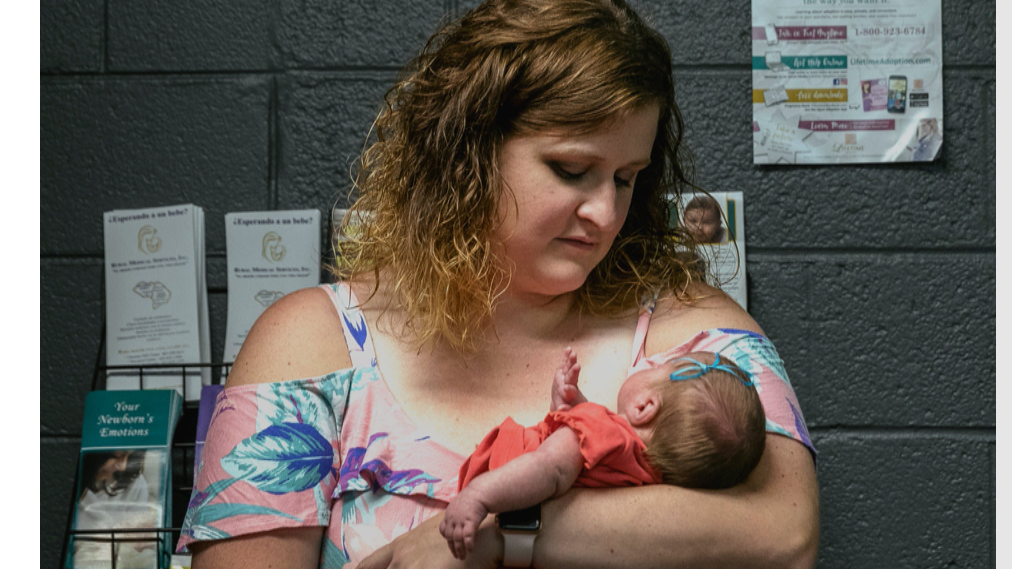 Saturday's New York Times included a surprising story on the front page about an evangelical pregnancy center in Newport, Tennessee. Reporter Elisabeth Dias spent time with Wendy Ramsey, who runs Options Pregnancy Help Center in the basement of Lincoln Avenue Baptist Church for expectant mothers. The article respectfully explored how Ramsey is trying to make a difference in the lives of pregnant women -- and yes, tries to evangelize about Jesus.

The June morning was quiet, the opposite of the anti-abortion protests she used to attend. Protests alone, she had come to think, were “not how Jesus handled anything.” She remembered a Bible story of Jesus welcoming an outcast woman — people like the pregnant women and new mothers she now spends her days trying to help.

“If we want to be pro-life, we have to want more than legislation,” she said. “It just can’t begin and end there.”

This is a fine point, but it also feels like a cartoon of the average pro-life activist, that they only march and never support pregnancy centers.

There's another paragraph like that deeper into the article:

She [Ramsey] finds truth in the critique by many who support abortion access that their opponents do not care about life beyond birth. “All we want is the baby to be born, and then we are not going to give the parents any kind of tools to take care of it,” she said of many others in the anti-abortion movement. “We are not going to come alongside them, we are just going to feel like we won.”

Let's guess Ramsey wasn't intending to slam "many others," but to describe how the crusade against abortion isn't just the lobbying. The Times isn't in the habit of suggesting the abortion advocates "feel like we won" when an abortion takes place.

Harsh criticism from the abortion industry is granted some space:

Options is one of more than 2,700 anti-abortion pregnancy centers across the country. It is affiliated with Care Net, one of the three largest networks of such centers in the United States, whose home page calls for action against “the pro-choice Left,” which it says “publicly defends infanticide.”

NARAL Pro-Choice America calls pregnancy center activists “anti-choice extremists” who “lie to and mislead women to prevent them from considering abortion.” Planned Parenthood clinics, like one in Memphis, report that pregnancy center volunteers try to lure women away from their doors with gift bags or protest vigils.

“All of that is directed at shaming patients who come for abortions, and stigmatizing abortion, which is a part of health care,” said Aimee Lewis, a vice president for Planned Parenthood of Tennessee and North Mississippi. “They are fake clinics.”

Then Dias presents the reality of what Ramsey does:

Options, like many independent anti-abortion pregnancy centers, is not a licensed medical clinic. But unlike some centers, it does not pretend to be. Volunteers do not force women to hear fetal heartbeats or show them gruesome photos of aborted fetuses. Women are informed that the volunteers are not professional counselors. The vast majority who come have already decided to have their babies.

Instead, the mission is to assure women they can handle the challenges to come, no matter the obstacles; the center helps them find jobs, emotional support or even a place to shower.

“The job is to not just say, ‘Hey, this is a real life inside of you, you need to save it.’ That’s not going to accomplish anything,” Ms. Ramsey, 31, said. “It is to get her to see that whatever she thinks is too big for her to handle, she can actually handle it.”

Dias even showed sensitivity for the religious mission of Options -- where I would add the note that believing in a merciful God might help with the "too big to handle" feelings.

Ms. Ramsey said her work was about helping women and their babies, but she also had an underlying hope: that they would commit their lives to Jesus. She offers extra points for Baby Bucks if they go to church. “I can’t lie,” she said. “Ultimately, I just don’t think that there can be an abundant life without Jesus. If they say that’s manipulative and a secret tactic, then I will not apologize for it.”