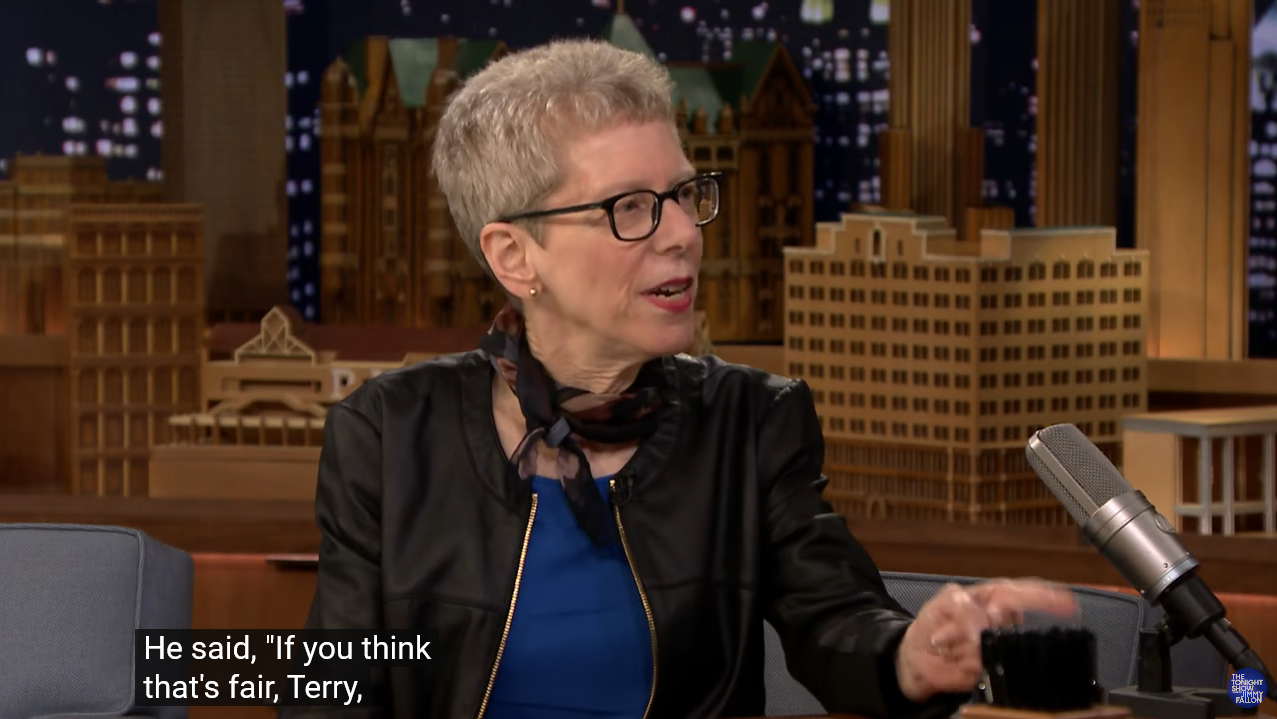 Trust us on this. Longtime NPR Fresh Air host Terry Gross is completely In The Tank for Al Franken. Back in the Dubya years, we contrasted her giggly, tickly Franken interview with a very hostile Bill O'Reilly interview, where he actually stormed out of the studio. Noting Gross demanded O'Reilly respond to Franken calling him a bully, NPR's ombudsman at the time confessed it showed a liberal bias.

But she was hailed for a "sick burn" when she went on Jimmy Fallon's show in 2017 and recounted O'Reilly said to her "if you think that's fair, you should get out of this business. And I was thinking -- one of us still has a show."

Gross is also a big fan of leftist New Yorker writer Jane Mayer, so it's completely predictable that she awarded 43 and a half minutes of national taxpayer-funded radio time on Thursday to Mayer, who wrote a huge article arguing Al Franken never should have left the Senate for apparently harmless sexual harassment.

(The first sign Gross is a soft touch? There were no questions about Mayer peddling the unproven accusations of Deborah Ramirez against Brett Kavanaugh last summer.)

Much of this segment was devoted to discrediting Franken accuser Leeann Tweeden, and the other seven Franken accusers were barely mentioned. Gross insisted to Franken that her own interview with the comedian-cum-Senator would help discredit Tweeden. Tweeden accused Franken of writing a skit so he could kiss her Gross said Franken told her in 2004 that he had a skit where the actress in the skit accused him of writing the skit so he could kiss them.

Gross knows this actually makes her look like a giggly Franken groupie, since she titters throughout Franken describing this not-so-feminist skit for the boys overseas, so she starts apologizing....a little: 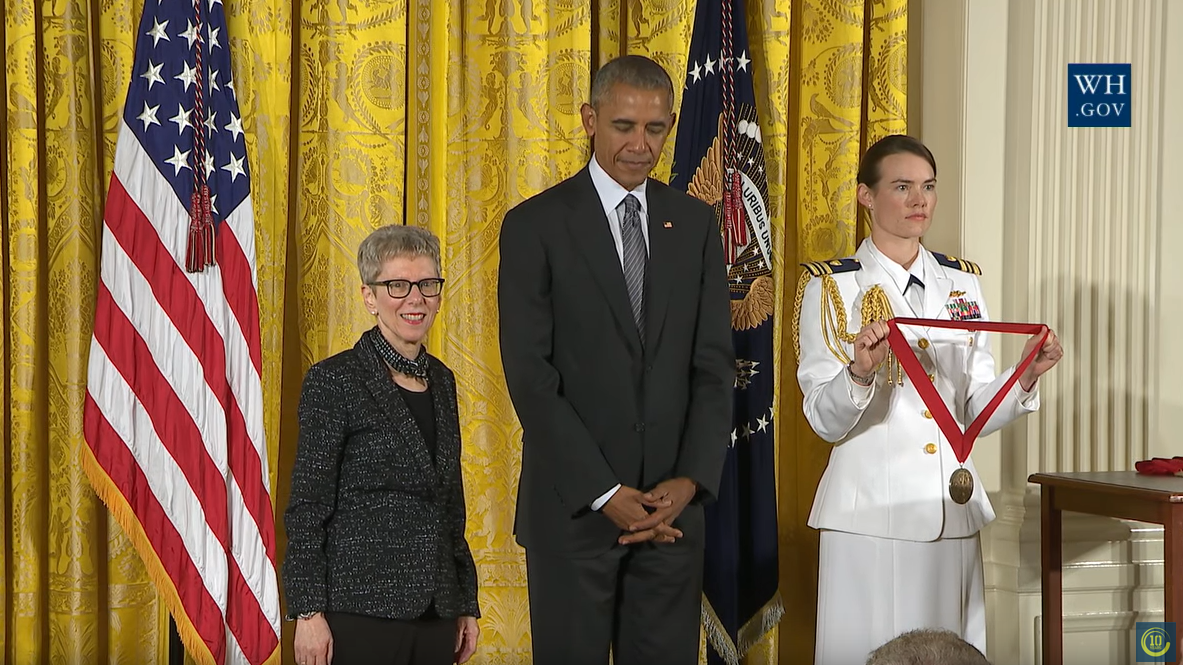 GROSS: I know some people listening will think, that was, like, really sexist sounding, and Terry's laughing so much. And so I'll cop to that. Yeah, I was laughing a lot. This was during the Iraq War in 2003. And I thought Al Franken was kind of, A, mocking himself, and B, doing some meta comedy about Bob Hope's sexist jokes on USO tours.

Maybe that was a misreading of it. And now I'm also thinking about, well, I'm sure there were women who were in the military in the audience, too, during that. A lot of women were exposed to sexual harassment in the military. So maybe in that respect, too, these jokes might not have landed that well to the women in the audience. But I wasn't there. I don't know how it went over, though, online - 'cause there was a video of it - it seems to have played pretty well. [Photograph is Gross being awarded a National Humanities Medal by President Obama in September 2016.]

After a lot of time trying to pick Tweeden apart, Gross then turned Franken's other seven accusers. This is where the real excuse-making begins. Mayer goes on a long speech about how Franken was a toucher, a kisser, and a hugger, it was "cultural," he didn't know any better. Then she actually downplays the other accusers as only suffering from a few seconds in front of large crowds:

MAYER: And so what I did was try to take a look at the other cases. I'm not, you know, his defense lawyer. I'm just trying to sort of scrutinize what's going on here. And I guess if you tried to summarize what they are, you've got two other cases of women who felt that he was about to kiss them, one of whom he kissed on the cheek because she turned her head away, and the other who said it looked like he was going to kiss her.

And then you've got four other women who were posing for photographs with him and said he touched them in some way that made them uncomfortable while they were posing - maybe either touched a breast, touched their rear ends, touched their waist. And they felt that it was in a creepy way. And then there's one more accusation, which is a woman who said that at a fundraiser, he somehow touched her - I think it was maybe on the breast - and then she excused herself to go to the bathroom. And she says that he said can I come with you. It was in, sort of, the middle of a crowded fundraiser.

Almost all of these, you know, if you could go through them, they took place in crowded places in public. And these were moments that lasted - I asked the women, those who I could reach, how long did this go on. And it was usually sort of three to four, maybe five seconds. So these were sort of fleeting touches and, you know, sort of weird.

The long interview ended with Mayer advocating for "some kind of due process," which she and her liberal allies didn't provide for Thomas, or for Brett Kavanaugh. But now she (and Terry Gross) mourn the lack of it for Al Franken.

GROSS: So Jane, you've reported so many sexual harassment and sexual assault stories, dating back to the Clarence Thomas hearings. What's the moral of the story regarding the Al Franken case? Where does that fit in in the #MeToo movement in your judgment?

MAYER: I talked to a number of incredibly smart feminists about how they saw it, and they're quoted in this story trying to evaluate it, too. And I end the story with a quote from Debra Katz, who was the lawyer for Christine Blasey Ford, the woman who accused Justice Kavanaugh of having sexually misbehaved towards her many years ago.

And so Debbie Katz, in this story, says she feels it's a kind of a cautionary tale, that the #MeToo movement - which she is a tremendous supporter of, as am I - needs to make sure that there is some kind of due process. You need to make sure that there is proportionality in terms of, you know, being able to distinguish different gradations of bad behavior. Not everybody is Harvey Weinstein, but there may be other kinds of misconduct that also need to be addressed, but in different ways. And nobody is saying you need to put up with sexual misconduct, but there are just different levels of it.

And then, finally, you know, I think what she's saying is that if you confuse less serious charges with serious ones, you feed a backlash against the whole movement that could hurt the movement. And there are number of women who are really strong feminists who worry about that in this story.