It's no secret that liberals despise that Fox News exists. But what's especially humorous is when liberals pretend that they don't have a "partisan front group" network like Fox. MSNBC is somehow nonpartisan. So is CNN. The Washington Post can decry democracy dying in darkness under Trump, and they're still nonpartisan. The liberal site Vox made a viral video claiming that there is a "hack gap" in the media, which explains why "conservative nonsense dominates American politics."

CARLOS MAZA: In an ideal world, political journalism looks like this. On either side, you've got the parties fighting for the attention of the press. and in the middle you've got journalists, sorting out what's important and what's just partisan bull---t. This is called gatekeeping, and it's one of the most important things journalists do. Political operatives can spin whatever talking points they want, but ultimately it's journalists who decide what we pay attention to.

Fox "claims to be a news organization, but it's essentially a Republican front group." Maza completely avoids the facts of a revolving door between Democratic Party politics and his "gatekeeping" liberal media, with anchors named Cuomo and Stephanopoulos. We get the usual history lecture about Roger Ailes advising Republican presidents, and don't bother looking at liberal network hacks like Rick Kaplan advising Democrat leaders like Bill Clinton on media strategy, or the Kennedys treating the media like parking valets in the Sixties.

Vox's Matthew Yglesias underlined "It's a network that was founded by political operatives, it has a partisan operative mentality, and it works....Political journalists are very sensitive to complaints about liberal bias, and so one thing they do is they overcompensate by paying a lot of attention to what's going on in conservative media. What are conservtives talking about? Let's elevate this. Let's take it seriously."

He complained "there's incredible agenda-setting power in AM talk radio and Fox News" and then it gets covered by the "mainstream." 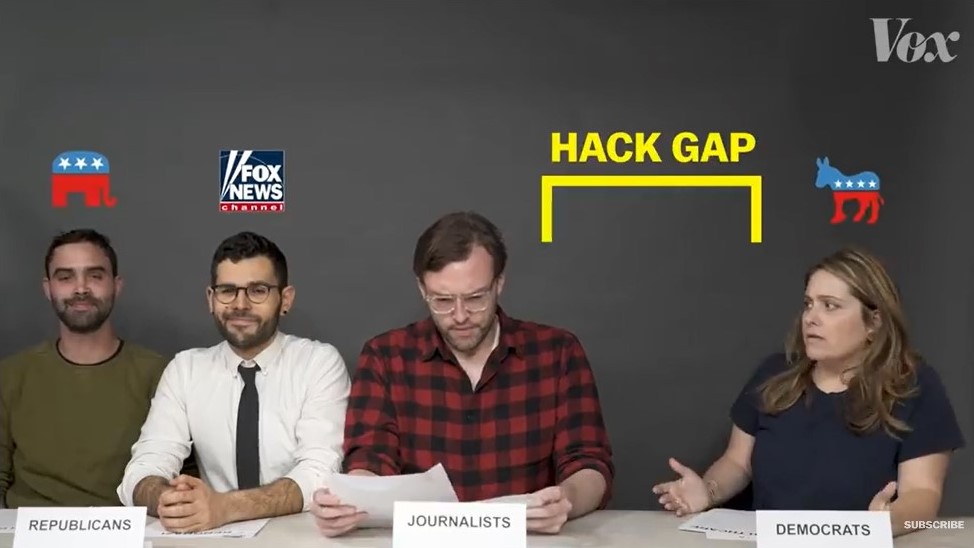 Maza then opened the case of baloney: "There's no equivalent to this on the Left. And that creates what Matt calls a Hack Gap. Because conservatives can manufacture their own outrage cycles, mainstream media outlets pay a lot more attention to their [BS], which means even minor slip-ups by Democrats can become career-defining scandals."

For example, Hillary creating a private e-mail server, which was apparently a "minor slip-up."

The most telling phrase in this video -- with almost 900,000 views on YouTube, and almost 700,000 on Twitter -- is the objection that "conservatives can manufacture their own outrage cycles." Maza is upset that in this "Hell" on Earth, someone can take conservative concerns and arguments seriously, instead of "gatekeeping" it all into a ditch (or off a bridge, since we were talking Kennedy news management).

In their "ideal world," everything conservatives want to discuss is just partisan BS, so no one needs to take it seriously. This hatred of debate and engagement with opposing ideas comes from the people who call themselves....Democrats.