The Washington Post demonstrated its tendency to act as Democratic advertising in an article headlined “‘A Pope Francis Catholic’: Now that Tim Kaine is Clinton’s VP pick, will his faith matter?” How can a legislator with a 100-percent score with abortion advocates and LGBT czars be a “Pope Francis Catholic”? He's as Catholic as the Pope? The Post needs to put its "Fact Checker" on this for a Pinocchio score.

Post reporters Michelle Boorstein and Julie Zauzmer turn to a sociologist for their favorable spin: 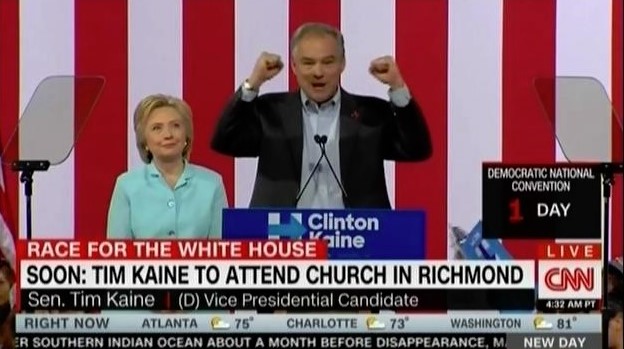 In the scheme of Catholicism, Kaine might be described as a “Pope Francis Catholic,” said William D’Antonio, a Catholic University sociologist who writes books on U.S. Catholic voting.

“Serving the poor has been a key aspect of [Kaine’s] work — and social justice, however you define it. He’s always looked upon that as a crucial part” of his life, D’Antonio said of why he puts Kaine in the Francis mold.

“At some point, if you ask: Who reflects more the way Francis looks at the world? To the degree that’s important, it’s certainly not Donald Trump,” D’Antonio said.

Trump is not a Catholic, so that point is awfully moot. As usual, The Post went looking for liberal experts: D’Antonio also wrote a book promoting the dissident Catholic group Voice of the Faithful, complete with an endorsement by former Maryland Lt. Gov. Kathleen Kennedy Townsend, whose social views match Kaine's.

Concern for the poor certainly defines Pope Francis, and hopefully Catholics, but the “poor” and vulnerable  include the unborn in the Church’s view. Pope Francis has ruffled feathers by trying to sound welcoming to homosexuals, but he hasn’t changed traditional church teaching on marriage, despite goading by the leftist media.

Has the WaPo forgotten that Francis explicitly condemned abortion in Laudato Si, stating, "Since everything is interrelated, concern for the protection of nature is also incompatible with the justification of abortion. How can we genuinely teach the importance of concern for other vulnerable beings, however troublesome or inconvenient they may be, if we fail to protect a human embryo, even when its presence is uncomfortable and creates difficulties? 'If personal and social sensitivity towards the acceptance of the new life is lost, then other forms of acceptance that are valuable for society also wither away.'"

At least they turned to a more conservative evangelical expert, Karen Swallow Prior of Liberty University, to explain why religious voters don't find the "I'm personally opposed, but would never restrict it" argument unconvincing. But Prior's more conservative argument was nowhere in the headline.

For an even gushier take, Post reporter Aaron Blake at The Fix wrote it's "hard to overstate" how much Kaine's religion helps:

In the 1980s, he took a break from his studies at Harvard law school to spend time as a Christian missionary in Honduras. While there, he taught carpentry and welding.

And in part thanks to his time in Honduras, Kaine is a fluent Spanish speaker. After winning his Senate seat in 2012, he became the first U.S. senator to deliver a speech from the Senate floor in Spanish.

It’s hard to overstate how big an asset each of these are for Kaine, politically....for Democrats, having a Christian missionary on the ticket could help appeal to more religious voters who tend to lean Republican.