The Public Broadcasting Service isn’t really a representative of the Public, as everyone should know. It’s the defender of liberal elite opinion, no matter what the polls say. This week, the polls are stacking up against President Obama on his ISIS policy and his Syrian-refugee policy. But the PBS NewsHour stands with Obama and in horror at the current Republican Party. 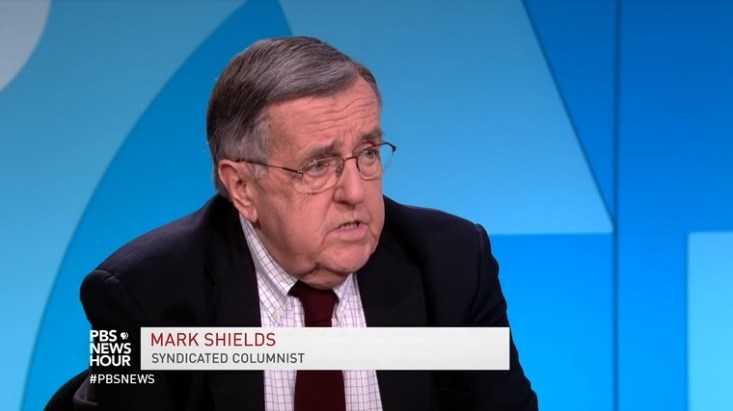 MARK SHIELDS: Fourteen years ago, when the United States suffered the greatest infliction of loss of life on its own soil in our history, the president of the United States, George W. Bush, visited a mosque. He said, Islam are our friends. These are — the people who do this are traitors to their faith, and we must remind and remember that.

He looked like Abraham Lincoln, compared to the reaction of politicians in this city, and particularly in Lisa Desjardins’ piece tonight, which was small, petty, vengeful, un-American, unserious and irresponsible.

When anchor Judy Woodruff began to change the subject, asking if Obama was “on track,” Brooks just had to echo his pal Shields that the GOP was immoral and degrading:

DAVID BROOKS:  First, let me echo what — something Mark said about the reaction, the George W. Bush reaction vs. the current reaction from the Donald Trumps and the Ben Carsons.

It’s — what is the vibe now among some people is immoral, degrading, but it’s also just bad foreign policy. Ben Carson is now running for office. He’s a senior figure in the American political scene. If you’re a soldier or Marine in an Arab country, Islam is the solution. And you need to show respect. And when that rhetoric flies out across the world, it makes it much harder for our diplomats abroad, for our service people abroad. It has practical impact.

At least Brooks played the centrist by adding “Now, as for President Obama, I think his policy is just a rank failure. And, frankly, he has had several — this has been a slow-rolling genocide for a long time.”

Then the two PBS liberals agreed that Hillary Clinton’s speech was good.

BROOKS: I think her speech was exceptional. It was complicated, but coherent.

SHIELDS: I thought that Senator, Secretary Clinton made a strong — a strong statement. I thought it was coherent.

Sadly for liberals, Shields jumped out front trashing House Speaker Paul Ryan for a bill restricting Syrian refugees, and ran out of time for David’s echo:

SHIELDS: This is a nation of immigrants that hates foreigners? I mean, this is a country that says, we’re going to have a religious test? How would you like to be the organizing propaganda minister of ISIS? And you say, let me tell you what the United States says. If you’re a Christian, you can come in. There are no Christian terrorists. Have they met the Ku Klux Klan?