Could you imagine The Washington Post leaping all over a Jeremiah Wright scandal for Obama in 2005, before he even announced for president? Neither would anyone else imagine such a political crib-strangling. But the Post is aping the rest of the liberal national media on Thursday morning by leaping all over Gov. Chris Christie. “Bridge scandal engulfing Christie,” was the breathless headline. “INCIDENT THREATENS N.J. GOVERNOR’S IMAGE.”

The Post also trashed Christie on the op-ed page (by liberal Jonathan Capehart) and on the front page of the Style section, which began “Chris Christie. [Shakes head.] What a disappointment. He purports to play in big leagues.” The partisan Post is on fire today.

The front-page article by Philip Rucker and Aaron Blake contains the usual hints of liberal glee about Republicans already losing in 2016. Let’s hope Phil and Aaron don’t let their Hillary buttons scratch their chest as they type: 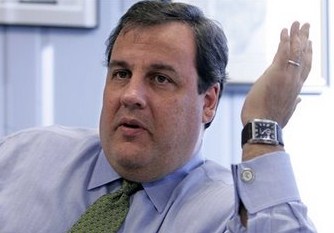 A series of e-mails and text messages disclosed Wednesday show that a senior aide and appointees of New Jersey Gov. Chris Christie forced days of traffic jams as apparent political retribution against a Democratic mayor, throwing a cloud of scandal over the Republican Party’s leading 2016 presidential hopeful.

The communications show that Christie’s deputy chief of staff and two of his top appointees at the Port Authority of New York and New Jersey closed a pair of access lanes from Fort Lee, N.J., onto the George Washington Bridge into New York, causing days of gridlock and mayhem in the Fort Lee area in September.

"Mayhem"? Someone whipped out a gun and started shooting? On some days, the Post could use a Republican copy editor to tone down their partisan delight.

This is obviously a story of how Christie seems Nixonian – dramatically ahead of his Democratic rival, and still behaving like he needs to crush opponents. Still, it’s a bit amusing for conservatives to see the same media liberals who boosted Christie in the closing days of 2012 as he hugged Obama on the Jersey shore now suggesting they are now throwing their own convenient spin on Christie’s image in the waste basket:

The incident threatens to rupture the image that Christie, the newly installed chairman of the Republican Governors Association, has been carefully cultivating since Hurricane Sandy as a bipartisan straight-talker who puts the interests of his state’s residents above all. It also clashes with the law-and-order bona fides he touted in his gubernatorial campaigns, where he ran heavily on his record as a U.S. attorney.

Christie’s brash, no-nonsense persona helped rocket him onto the national stage, as videos of the governor dressing down reporters at news conferences and questioners at town hall meetings went viral online. But the actions of his associates over a trivial, even petty, political grievance could make Christie’s trademark toughness seem more like bullying — a serious vulnerability as he begins introducing himself to voters nationwide.

Rucker and Blake then put a cherry on their sundae by lining up Steve Schmidt, Tom Kean Sr., and Fred Malek – GOP establishment Christie boosters all – to bash Christie for his “rookie mistake.”

The Style article by Monica Hesse wasn’t subtle at all. It was a balls-to-the-wall editorial from the start:

Chris Christie. [Shakes head.] What a disappointment. He purports to want to play in the big leagues, and yet:

“Is he really ready for prime time?” wonders journalism professor and scandal-culture expert Mark Feldstein. Can he truly be ready for a nationally ambitious operation if his aides are thinking so small? “If he’s not willing to be thinking of unauthorized wiretaps . . .”

Exactly so. This is precisely the issue we need to be talking about. New Jersey Gov. Chris Christie is frequently mentioned as a potential Republican presidential candidate in 2016, but recent actions reportedly linked to the Christie administration are —

“I mean, it was just a dumb thing to do,” says George Hayduke, author of more than a dozen revenge-themed books, including “Make ’Em Pay” and “Up Yours.” “If someone had come to me for advice and said, hey, you’re the revenge guy,” Hayduke would have advised them, “That’s just dumb.”

Hayduke is a pen name, so Mr. Revenge is a bit of a chicken, even as he colorfully claimed to Hesse that he generally likes to refer to elected officials as “Beltway bowel movements.”

For old Post-watchers, Hesse’s start is a Xerox of former executive editor Ben Bradlee denouncing former New Hampshire Gov. John Sununu. "A jack-leg Governor from a horse's ass state. How could he play with us in the big leagues?"

The Jonathan Capehart article on the op-ed page summarized a blog post: “As I’ve said before, Christie’s famed in-your-face bluster might work well along the Acela corridor, but it will prove disastrous on the campaign trail. Me thinks voters in early primary states won’t be thrilled to see that the bluster and vindictiveness affect innocent bystanders (i.e. children trapped on buses for hours on the first day of school).”