Biden’s Border Crisis Is Back on the Nets: More Coverage in April Than Past 5 Months Combined 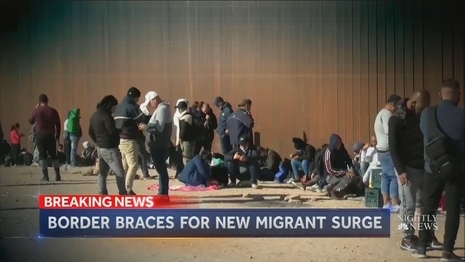 The network evening news in April rediscovered Joe Biden’s crisis on the southern border, offering more coverage than they had in the previous five months combined. And all it took for this was a record-smashing high for border crossings, the most in Department of Homeland Security history.

That total of 26 minutes and 57 seconds dwarfs the previous five months combined. From November 1, 2021 to March 30, 2022 there was only 14 minutes and one second of coverage to the spiraling situation at the border. 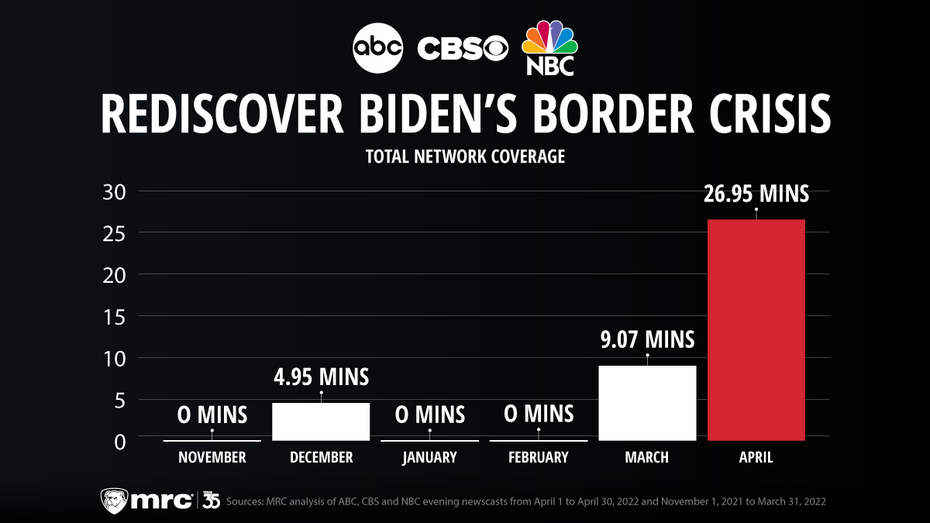 Three out of those past five months (November, January and February) saw no coverage at all on the evening newscasts. In December, the networks managed just four minutes and 57 seconds and nine minutes and four seconds in March.

Most of the coverage in April revolved around the Biden administration’s attempt at lifting Title 42, a COVID-era health policy that allows for the immediate expulsion of illegals trying to cross the border. Word came down last Friday that a federal judge had blocked the effort (for now).

But in the weeks leading up to the expiration of Title 42, ABC, CBS and NBC suddenly rediscovered the border as a topic of conversation.

On the April 1 World News Tonight, reporter Whit Johnson seemed not to grasp the severity of opening up a crisis on top of a crisis. He parroted government talking points:

As the month went on, the networks woke up to the seriousness of the coming disaster. On the April 6 CBS Evening News, correspondent Manuel Bojorquez warned that even certain Democrats oppose the move:

Some Democrats have joined Republicans in cautioning against what they consider a rushed end to the policy. Both Arizona senators, Democrats Kyrsten Sinema and Mark Kelly, released a joint statement, Kelly calling it the “wrong decision,” and Sinema saying the move “shows a lack of understanding about the crisis at our border.” The White House, bracing for tens of thousands more migrants applying for asylum in the coming weeks, is sending additional resources to the border.

On that same show, anchor Norah O’Donnell grilled Homeland Security Secretary Alejandro Mayorkas: “When Title 42 is lifted, it could mean up to 18,000 more migrants every day. This will become an even bigger crisis. How is the department preparing to deal with it?” She even followed-up: “But you acknowledge you’re likely going to see a surge?”

On the April 18 NBC Nightly News, anchor Lester Holt mentioned how bad March was and connected it to Title 42:

At the southern border, officials revealing more migrants crossed into the U.S. in March than any other month since records were kept. This as authorities brace for a massive surge after the Biden administration lifts a border restriction known as Title 42.

While Title 42 dominated the April coverage, other topics included Texas Governor Greg Abbott sending some migrants to Washington D.C. on a bus and Ukrainians at the southern border.

The networks deserve some credit for at least returning to the disaster at the border after ignoring it for months. But their renewed interest still doesn’t match the coverage from last spring. As I wrote in January of 2022:

Keep that in mind: 173,283 border crossing in March 2021 and 113 minutes of coverage. April 2022 saw 234,088 crossings with just under 27 minutes. The situation is getting worse by the month. The networks have a responsibility to cover the crisis regularly, not just in spurts. But as the midterms loom, expect ABC, CBS and NBC to go back into Biden protection mode.