The crisis at the border is still spiraling out of control and the liberal news networks are determined to smother any mention of it. According to statistics from U.S. Customs and Border Security, there were 173,600 encounters along the southern border in November. This is a five percent increase over October. Yet, the evening newscast coverage dropped to a shocking zero. Zero minutes and zero seconds on ABC’s World News Tonight, the CBS Evening News and the NBC Nightly News.

That’s down a stunning 100 percent from March when the same network newscasts felt they couldn’t ignore the deteriorating crisis at the border. That month, there was a whopping 113 minutes of coverage for 173,281 encounters. 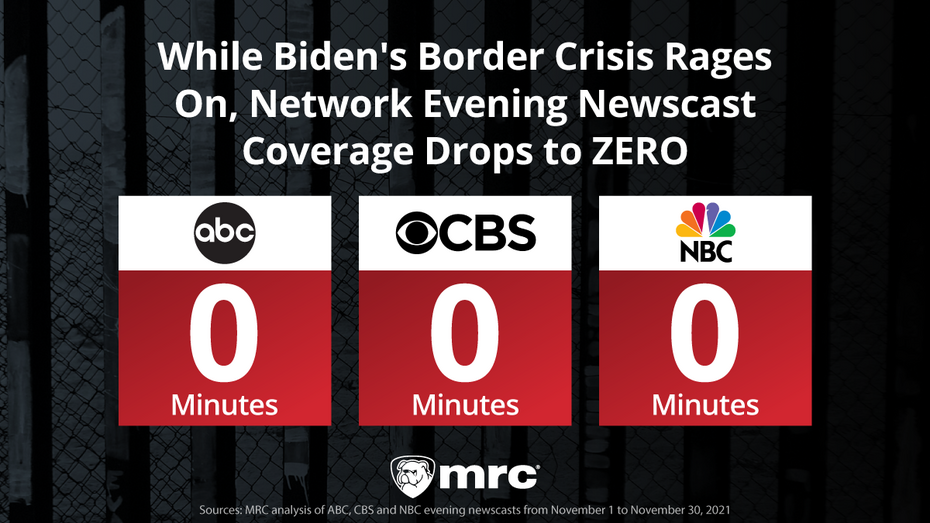 The network evening newscasts were interested in some border clashes in November, but they were in Europe. All three networks repeatedly covered the dispute between Belasrus and Poland. On November 16, World News Tonight’s David Muir opened the show by worrying: “Overseas, tonight, our team on the scene of the violent clash involving migrants at the border separating Belarus and Poland.” This is an important story, but it’s depressing that journalists thought it was the only border crisis worth covering. 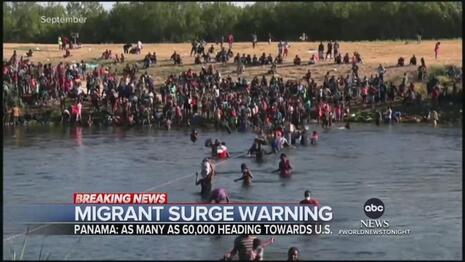 That was up nine percent from August. NBC offered the most stories, focusing 23 minutes and 26 seconds. CBS came in second with 16 minutes and 32 seconds and ABC was a close third with 14 minutes and 12 seconds.

Some of that coverage, though, came from those on the left who recoiled at border agents on horses and insisted that migrants were being whipped. On the September 23, Nightly News, reporter Morgan Chesky warned the Biden administration: “The White House under fire over these images of border patrol agents on horseback.”

On that same day, Joe Biden actually commented on the footage, prompting coverage on all three networks. On the September 23 CBS Evening News, Manuel Bojorquez noted, “The controversy over border agents on horseback dispersing migrants continued, with President Biden weighing in.” Speaking of border agents, Biden proclaimed, “It’s outrageous. I promise you, people will pay.”

In September, the networks actually seemed to grasp that the disaster at the border is a serious one. CBS Evening News anchor Norah O’Donnell warned, “Tonight, a humanitarian crisis at the southern border is growing worse by the hour. Thousands of migrants have waded across the Rio Grande.”

But by October, the coverage plummeted again. ABC’s evening newscast had only 2 minutes and 16 seconds. CBS managed 4 minutes and 55 seconds and NBC was the only one to get into the double digits at 10 minutes and 25 seconds. Nightly News investigated topics like migrants coming from Colombia, the threat of Covid coming across the border. And while October border encounters were down slightly, they were still historically high, the highest for the month in the last 22 years.

Almost half of CBS’s October total, 2 minutes and 21 seconds on October 29, was devoted to misconduct by border agents. Evening News's O’Donnell lectured, “Tonight, a little known unit within the U.S. Border Patrol is being accused of interfering in investigations of fatal encounters involving its agents.

ABC’s World News Tonight produced just two reports on the border in October, one on October 3 and a brief on Halloween. Laughably, reporter Whit Johnson on October 3 insisted, “Now to fears of a looming crisis at the U.S. border.”

Looming? The crisis isn’t coming. It’s here. But you wouldn’t know that from most of the network coverage in October, as well as the total abandonment of it in November. Journalists and anchors at ABC, CBS and NBC are still doing their best to protect Joe Biden and the Democrats from the horrible reality on our southern border.