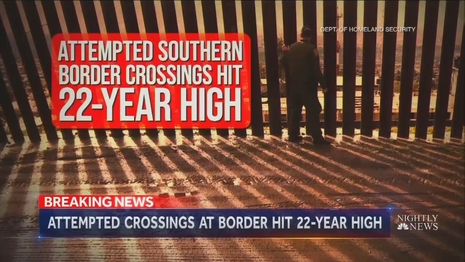 The Biden administration, desperate to hide the exploding crisis at the border, dumped the March crossing numbers late on Good Friday of Easter weekend. The dutiful drones on the network evening newscasts did their part in burying the bad news — a record 221,303 encounters with illegals.

In March, there was just nine minutes and four seconds of coverage to the border crisis on World News Tonight, the NBC Nightly News and the CBS Evening News. (And most of that was devoted to something Americans largely agree on: The plight of Ukrainians fleeing war in Europe and trying to enter the U.S. at the border.)

Here’s how NBCNews.com reported the disastrous numbers late on Friday night of a holiday weekend:

The number of migrant arrivals along the U.S. southern border climbed in March to the highest level in more than two decades, according to new government data.

The Department of Homeland Security said in a court filing Friday that there were 221,303 encounters with migrants along the border with Mexico border last month, a new high under the Biden administration.

Yet, on Saturday night of Easter weekend, CBS Weekend News censored the story, allowing no coverage. World News Tonight allowed a meager 23 seconds and NBC Nightly News offered the most: two minutes and 23 seconds. Though much of that was on the move by Texas Governor Greg Abbott to send processed migrants to Washington D.C.

NBC reporter Kelly O’Donnell on Saturday conceded, “Attempted crossings at the southern border hit a 22-year high in March. Homeland Security found more than 221,000 non-citizens trying to enter. Under a Trump-era public health rule to limit COVID spread called Title 42, more than 123,000 of those migrants were barred from the U.S., but that rule ends in May.”

Here is all 23 seconds from World News Tonight's Whit Johnson:

Next here, there is news of a major increase of migrants arriving at the US border with Mexico in recent weeks. US Customs and Border Protection encountered more than 221,000 migrants last month, the third-highest number, ever. And that is only expected to increase next month, when the US lifts Title 42, the controversial policy which expels migrants at the border due to pandemic concerns. 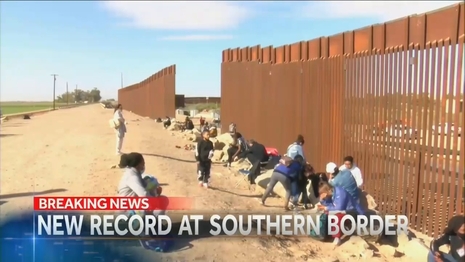 In all of March, there was nine minutes and four seconds of coverage on the three evening newscasts on the border crisis. As I wrote on April 4, 2022:

Most of that coverage (eight minutes and 15 seconds) was understandably sympathetic stories about Ukrainians trying to cross the U.S. southern border after fleeing war in Europe. Given that most Americans side with the plight of the Ukrainian people, the networks apparently found this an acceptable type of border coverage. (The remaining 49 seconds was related to Title 42.)

On Monday, Nightly News returned to the border crisis, warning of a “massive surge” of migrants with the lifting of Title 42. (To put it another way: That would be a surge on top of a surge.)

The situation at the border is a full-on crisis and it’s about to get worse. Expect the corrupt evening newscasts to continue to try and hide this disaster.

The continuing attempt to hide the border crisis was sponsored by Allegra on CBS, by Hulu on ABC and by Wayfair on NBC. Click on the links to let them know what you think.