The spiraling crisis on America’s southern border is spreading, rippling to all parts of the country with impacts on crime and national security. But you wouldn’t know that if you watched the networks in January. The total amount of coverage on the ABC, CBS and NBC evening newscasts dropped to a shocking ZERO minutes and ZERO seconds for the month.

According to a court filing obtained by Fox News, unofficial numbers show 153,941 encounters at the southern border in January. This is double January 2021 and quadruple January 2020, according to Fox. (The official government numbers have yet to be released.) 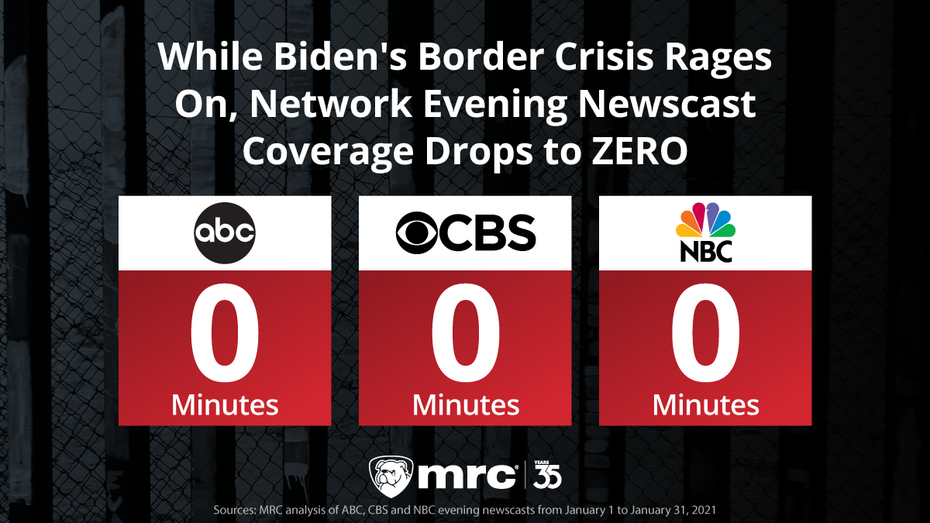 The networks, however, eagerly reported on one country’s immigration policy. That country was Australia, though. From January 1 to January 31, ABC’s World News Tonight, the CBS Evening News, and the NBC Nightly News devoted 26 minutes and 14 seconds to tennis star Novak Djokovic’s ultimately failed bid to play in the Australian Grand Slam and his fight not to be deported from the country over a refusal to vaccinate. ABC offered a whopping 9 minutes and 3 seconds. NBC came in second with eight minutes and 58 seconds. CBS allowed eight minutes and 13 seconds. 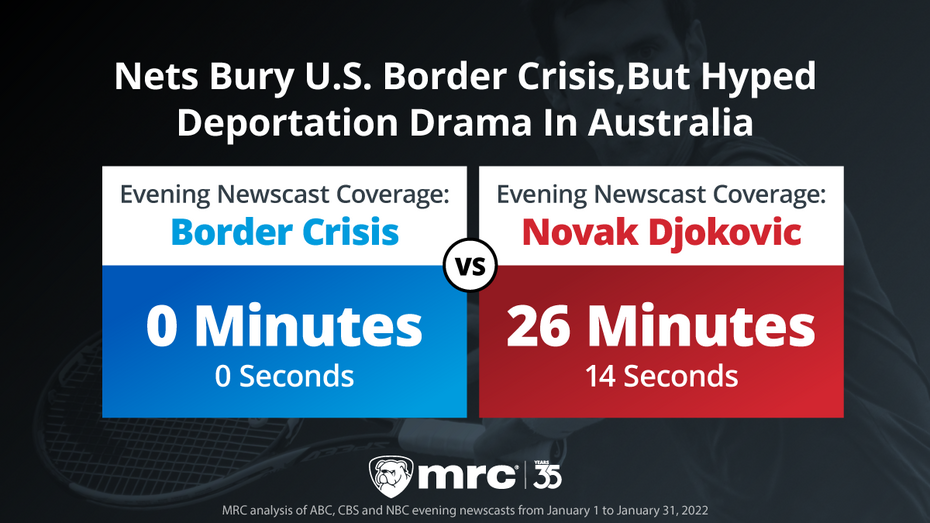 The drama with Djokovic included a deportation struggle, the revoking of his visa and a discussion of whether a country’s immigration laws apply to all who want to enter. The evening newscasts were fascinated with this story on the other side of the world, but don’t seem to care about a sprawling, ongoing crisis right here in America.

In addition to the consistently high border apprehensions in January, specific examples illustrate just how bad the situation has gotten. Last month, two illegal immigrants were charged with murdering three people. The charred remains of their murder victims were found full of bullet holes in an SUV in Alabama.

Perhaps most shockingly, only Fox News in January covered illegal immigrant criminals being deposited in places like New York, to the bewilderment of local law enforcement. Fox's Melugin said on January 26 that “[a] source within ICE tells me that the agency has in fact been releasing some illegal immigrants who have misdemeanor criminal record, some things like assault, or drunk driving.”

January’s zero coverage on the evening newscasts sounds shocking, but it’s simply part of a pattern for ABC, CBS and NBC. In December, they did only marginally better: 297 seconds. ABC and CBS allowed less than a minute total, with just 17 seconds on World News Tonight and 20 seconds on the CBS Evening News.

The NBC Nightly News, however, managed three minutes and 43 seconds. But still, that’s better than November when the networks were back at a depressing zero seconds. The 297 seconds in December, as well as the zero coverage in November and January amount to a pitiful 4 minutes and 57 seconds in three months.

It’s not as though the networks are incapable of covering the crisis at the U.S. border. In March of 2021, ABC, CBS and NBC offered an impressive 113 minutes for 173,281 encounters at the border. By August, the coverage had plummeted 96 percent.

The disaster on the border rages on. But the networks, ever fearful of harming Joe Biden and the Democratic Party’s dimming midterm chances, are burying the story. They’re too busy covering Australia’s immigration policies.