For the Last Two Months, the Nets Buried the Border Crisis (And It’s About to Get Much Worse)

Joe Biden just made the spiraling crisis on the southern border a lot worse. The question is, will the compliant networks even notice? Last week, the Biden administration announced it would be ending Title 42, a COVID-era health policy that allows for the immediate expulsion of illegals attempting to cross the border. Considering that the February border crossings were already 63 percent higher than the same time last year, get ready for a dangerous situation to get even worse.

But you wouldn’t know how bad the situation at the border is if you watched the ABC, CBS and NBC evening newscasts over the last two months. In February, these shows allowed ZERO minutes and zero seconds of coverage to the shockingly high border numbers. In March, they were only slightly better, nine minutes and four seconds.

And most of that coverage (eight minutes and 15 seconds) was understandably sympathetic stories about Ukrainians trying to cross the U.S. southern border after fleeing war in Europe. Given that most Americans side with the plight of the Ukrainian people, the networks apparently found this an acceptable type of border coverage. (The remaining 49 seconds was related to Title 42.) 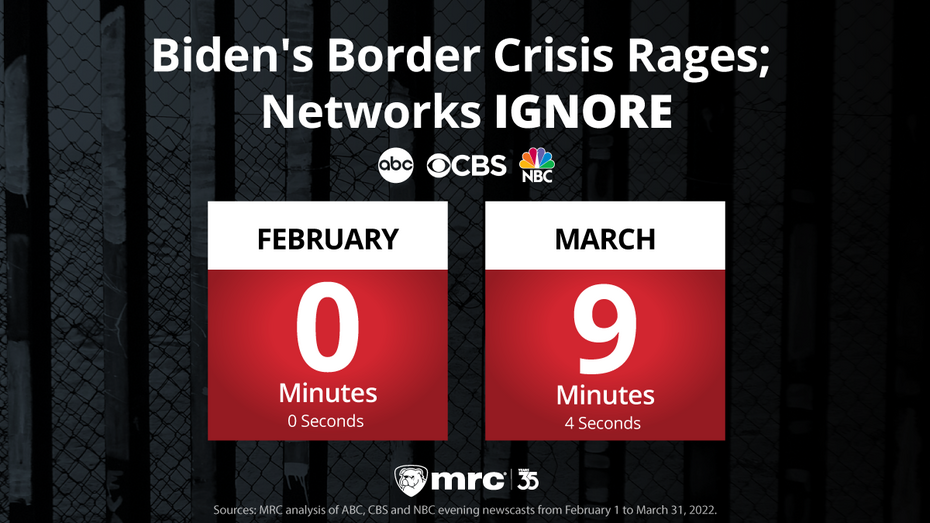 Here’s the breakdown for March: NBC, had the most coverage at six minutes and 31 seconds. ABC came in second with two minutes and three seconds and CBS had just a scant 30 seconds.

Other than Ukrainians at the border, the only other subject discussed was Title 42. On March 30, Nightly News journalist Gabe Gutierrez explained: “Breaking late today, news that would make it easier for immigrants, including those fleeing Ukraine, to come to the U.S. The Biden administration in late May is planning to lift Title 42, the public health policy that denied asylum seekers entry due to COVID.”

He mildly added, “Officials at the border are anticipating a surge when the policy lifts.” On the March 30 CBS Evening News, Ed O’Keefe echoed, “Authorities now say it’s going to end by May, and it could lead to a record surge of migrants trying to cross the southern border.”

A “record surge” could be coming? It’s already here. On the March 30 MTP Daily, Jeh Johnson, Barack Obama’s Department of Homeland Security Secretary, publicly conceded the bleak assessment. He agreed that maintaining Title 42 is a way to keep the already skyrocketing numbers from going even higher. Johnson bluntly added a perspective not seen on the networks:

I’m waiting to see when and if they drop Title 42 for the southern border. It is, frankly, a way to keep the numbers down.... Typically, the largest months are March, April, and we’re surging right now. Just for perspective, we’re about to hit one million in six months. My highest year was 468,000 in the entire year, and that, politically, felt like the world was coming to an end. So, these are very, very large numbers. They’re unsustainable, in my view.

The Biden crisis at the border has real-world effects each and every day. Here are just a few examples:

Did you hear about any of these stories on the network evening newscasts? No. And with the coming end of Title 42, this out of control border situation is only going to get worse. Even Democrats Kyrsten Sinema and Joe Manchin have called on Biden to keep the policy in place.

It’s time for ABC, CBS and NBC to look this crisis in the face and cover it. Even if that results in more bad news for the Biden administration.