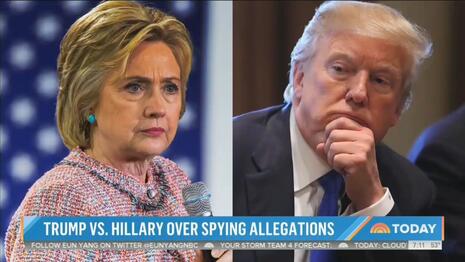 Just over one week ago, a bombshell broke in the world of politics. But if you got your news solely from the networks, you might have missed it. On Friday, February 11, Special Counsel John Durham alleged in a court filing that the 2016 Clinton campaign effectively spied on the Trump campaign to push a Russian collusion narrative.

While outlets like The Washington Times and The Washington Examiner jumped on the story immediately, CBS and ABC stonewalled all week, censoring the explosive allegations on their morning or evening newscasts. That's ZERO coverage.

NBC by contrast, offered a meager 5 minutes, 16 seconds on February 17. The network reporting offered a defensive posture, dismissing the “unproven claims” against Clinton.

By comparison, MSNBC produced considerably more coverage than NBC, totaling a whopping 84 minutes, 15 seconds over one week. But it was almost entirely dismissive, insulting people who care about the claims as “total asses.” In terms of time, CNN managed a middle ground, 13 minutes, 26 seconds. The network's tone, however, was identical to MSNBC.

Here’s how the coverage broke down on the networks and MSNBC and CNN from February 12 to February 18, 2022.

ABC AND CBS: 0 minutes and 0 seconds

ABC and CBS flat-out refused to cover the case Durham is building and the implications it has on the media obsession over “collusion” by the Trump campaign. Instead of covering actual news, ABC offered stories on a stuffed panda at the Winter Olympics and promotional segments for corporate parent Disney. CBS offered an equally embarrassing bit of corporate sucking up: CBS Mornings hosts on Wednesday allowed a full segment on ViacomCBS renaming itself Paramount.

NBC, like ABC and CBS, ignored the spying accusations for much of the week. But on Thursday morning, the Today show broke from the other two. Co-host Savannah Guthrie couldn't take it seriously. Here is her introduction: “Well, now to a story making big waves in Washington. It’s what amounts to unproven claims that Hillary Clinton’s 2016 presidential campaign paid to spy on Donald Trump.”

The casual contempt was clear from reporter Hallie Jackson. She dismissed, “It would be explosive if it were true.... But Hillary Clinton now slamming the whole thing as ‘a fake scandal to distract from Mr. Trump’s real ones.’” Another Clinton-defending report aired on the February 17 Nightly News.

MSNBC, unlike the networks, provided plenty of coverage. Yet, it served the same goal as ABC, CBS and NBC: Imply that only stupid people would take this seriously. On Tuesday morning alone, Morning Joe hosts devoted 27 minutes, 48 seconds on the Durham probe. Co-host Joe Scarborough attacked the “willfully stupid” people promoting the story.

On Thursday, he upped the insults, attacking the “complete, total asses” who care about alleged surveillance. On Wednesday’s Deadline: White House, anchor Nicolle Wallace made no effort to hide her contempt. She began a 16 minute, 10 second segment this way:

Over the past few days, Donald Trump and his allies and conservative media have been totally consumed by a story, they say, wait for it, is bigger than Watergate. Those of us on earth one may have missed it.

Wallace seethed over the “dangerous disinformation” pushed by the “right-wing media.”

In terms of total time, CNN landed in a middle between the networks burying the story and MSNBC’s considerable — but dismissive — coverage. Yet, while the total time may be less than MSNBC, the contempt was similar. On Tuesday’s Inside Politics, reporter Evan Perez declared Durham’s accusation wasn’t “actual spying.” He also concluded that the whole story is just so old: “This is something looking back at 2016 and here we are in 2022.”

CNN again covered the story very early on Friday. If you were up at 5:27 AM ET, you heard Early Start anchor Laura Jarrett make this mocking introduction: “This next story is about a prosecutor, a conspiracy theory, and how hard it is to put the genie back in the bottle.” 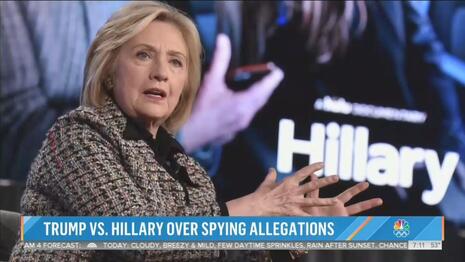 The Wall Street Journal’s editorial page on Tuesday best summarized the problem with the journalistic dismissal:

The press corps doesn’t usually support government spying, but when it comes to Donald Trump they are making an exception. The journalists who gave themselves prizes for pressing the Russia collusion narrative that turned out be false are now dismissing news that their narrative was inflated with false information collected by eavesdropping on Mr. Trump.

The Journal, a prestigious media outlet that is actually covering the Durham claims, concluded, “We don’t apologize for thinking that all of this is news that readers might like to know about. The mystery is why the rest of the press corps wants everyone to ignore it.” Well said. The same outlets that devoted 2,634 minutes to all things Russia, now find themselves suddenly silent on the serious charge that Hillary Clinton may have been caught red-handed surveilling her opponent.

(Note on methodology: For this February 12 to February 18, 2022 study, MRC analysts reviewed the morning and evening newscasts on ABC, CBS and NBC, as well as the cable channel coverage on MSNBC and CNN. For the cable channels, this was between the hours of 5AM ET and 12 AM ET.)