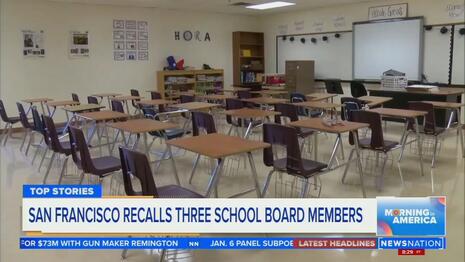 Late Tuesday night, over 70 percent of voters in dark navy blue San Francisco showed even they have a limit for woke politics as they removed three members of the city’s Board of Education as a reaction to their lengthy school closures, choosing to spend time renaming schools, and showing an aversion to the needs of the children they serve. Of course, none of this was of interest to the major broadcast network morning shows on ABC, CBS, and NBC.

While it was no surprise that the actual journalists at NewsNation’s Morning in America covered the recall, it was a shock to see CNN and MSNBC not only mention it, but recognize it as a harbinger of things to come with the November 2022 midterms.

San Francisco residents overwhelmingly voted to recall three members of the city school board on Tuesday. The recall was done for what critics called misplaced priorities and putting progressive politics over the needs of children during the pandemic. Replacements will be appointed to serve until another election in November.

Over on CNN’s New Day, co-host John Berman teased a segment on the “historic recall election” and wondered if the result was “a sign of things to come around the country.”

Co-host Brianna Keilar helmed the three-minute-and-53-second segment with correspondent Nick Watt, explaining the recall came “amid fierce backlash from parents who say the officials failed to prioritize their children,” adding it was an “incredible” story.

Watt correctly started by noting some viewers might be wondering why they should care about this recall and especially considering it’s in a place that “voted 85 percent for Biden” (click “expand”):

You know, you might ask yourself why is a local school board meeting getting national attention? Well, it’s in part because this is in deep blue San Francisco. You know, voted 85 percent for Biden last time around and, you know, we’ve gotten used to seeing anti-COVID restriction protests in red states. Not so much in cities like San Francisco and COVID restrictions are at the heart of this. Listen, there are many other issues, of course, but a lot of parents seem to be motivated by the fact that their schools there in San Francisco were closed for over a year, and meantime, the school board was doing other things like trying to rename 44 schools that were named after people like Abraham Lincoln, who they decided shouldn't be honored in that way anymore. So that is one of the major things that drove this.

Now, the recalled school board members, you know, they said, listen, that renaming effort was going on long before. It started in 2017 and they also say, listen, you're not giving us credit for the very low COVID case numbers in San Francisco that the city is getting credit for. So, what happens now? Well, London Breed, the mayor, she gets to appoint three new school board members until the next election....Now, this was the first recall vote in San Francisco in about 40 years, but recalls have become quite fashionable in this state. You'll remember Governor Gavin Newsom, he survived pretty easily a recall effort last year that was really driven by COVID restrictions. San Francisco’s progressive D.A. also faces a recall vote June 7th.

Watt closed by reiterating the story matters “because it’s anti-COVID” sentiments “in a very blue city” and that San Francisco officials are perhaps trying to put a lid on voters by asking them to approve a measure in June that would significantly curtail recall elections.

Of course, Keilar sought to side with the COVID extremists, saying the question was whether “officials balanced priorities correctly, especially with the benefit of hindsight” and even though “we can all look back and” question decisions, the real question should be whether they “could...have at the time. I don't know. It’s up to voters, I guess[.]”

Over on MSNBC’s Morning Joe, the panel spent much of a 20-minute-and-41-second block in the 7:30 a.m. Eastern half-hour dissecting what the results mean for their party (the Democratic Party) and whether their wokeness has run amok.

Our Mark Finkelstein covered their initial coverage in the 6:00 a.m. Eastern hour and complaints from Mike Barnicle, Donny Deutsch, and Joe Scarborough that Democrats are letting their wokeness stray from communicating that they care about all voters and in language they can understand.

MSNBC contributor Eddie Glaude somewhat came to their defense, arguing Democrats are too often trying to sound like Republicans and suggested the San Francisco losses were due to “a whole bunch of outside money” (click “expand”):

But as a student of history though — appreciate that. As a student of history, one of the things I see as one of the most dangerous combinations to thwart American progress is the combination of those who are explicitly bigoted and those who are worried about going too far. So, you can have someone actually co-write, co-author the 13th Amendment, but think the 15th Amendment goes too far. You can have someone actually support desegregation in the south but actually think — right — Fair Housing Act goes too far. Great Society goes too far. So whenever I hear the language of going too far, I hear — and it usually comes from latte liberals, mocha liberals — mocha liberals, right?

So I think they’re afraid that the party’s going — the fear of the party going too far is         actually a fear based in a framework that has been defined by the age of Reagan. A Democratic party that sought to think of itself — and we had this conversation at Princeton — as the third way — right — which is basically the Republican light. And I believe that, when Repub — when voters have a choice between real Republicans and Republican light, they more often go to the Republicans. And so, part of what I think is to avoid this kind of political spectrum, left, right, alt — progressive, conservative, and actually speak to the issues on the ground. In San Francisco, it’s more complicated. In San Francisco, there’s a whole — there was a whole bunch of outside money that came into there. In San Francisco, there’s a debate about whether the mayor is engaged in a power grab because these same three were going to go for reelection in November. When we begin to chart the money, we see that the money is not necessarily local. It is part of a concerted campaign around the country by folks who are targeting school boards, who are connected to CRT.

PoliticsNation host Al Sharpton agreed: “[I]t is outside money and there's some power grab stuff in there.”

Glaude later backed off, saying it’s “performing progressivism” when educators and their allies in politics don’t focus on “fundamental issues like putting food on the table, keeping a roof over your head, and sending your kids to college,” and attending to students.

Further putting ABC’s Good Morning America to shame (which sucked up to the Genocide Games’s mascot instead), their early-morning show America This Morning had a 26-second brief on the “[a]nger over COVID restrictions affecting children.”

Instead of even giving a news brief to this, CBS Mornings touted South Park’s catalogue of episodes moving to CBS’s parent company’s streaming platform Paramount+ in 2025 and, on NBC’s Today, they touted a character from Apple TV+’s Ted Lasso meeting Sesame Street’s Oscar the Grouch.

Wednesday’s bias by omission was sponsored by Hyundai (on ABC) and Planet Fitness (on CBS and NBC). Follow the links to see their contact information at the MRC’s Conservatives Fight Back page.

To see the relevant transcripts from February 16, click here (for CNN) and here (for MSNBC).