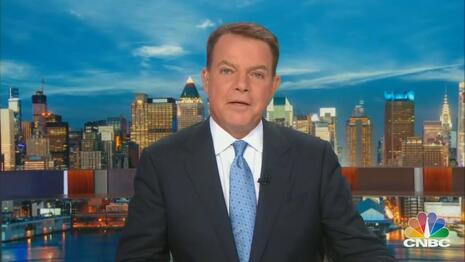 You know it’s bad when even the left-leaning Daily Beast is writing about your decline. Shepard Smith, the liberal former Fox News host famously left his network after 23 years, is running into trouble at CNBC. The Daily Beast warned of low ratings, a difficult environment for staff, and “temper tantrums” endangering the show.

The story by Lachlan Cartwright and Maxwell Tani created a gloomy picture for the liberal journalist: “CNBC insiders have a lot of reasons for why Shepard Smith’s show has failed to capture major ratings. But one thing many agree on is that it has not met the bosses’ expectations.... The viewers never seemed to show up.”

According to Nielsen Media Research, the show averaged just 197,000 total viewers in June, losing a third of its viewers since the show’s peak in February, which saw an average of 296,000 nightly viewers.

The darker claims about Smith describe a very difficult person to work for. Cartwright and Tani described, “But amid a wider re-evaluation of bullying in media workplaces, some staffers have complained that he is difficult to deal with.”

At least two people with direct knowledge of the situation described Smith as having regular “temper tantrums.” When CNBC announced Smith was joining the business news channel, it tapped Sandy Cannold, a veteran TV producer, to help helm the show along with co-executive producer Sally Ramirez, a veteran of local television. But according to multiple people familiar with the matter, Cannold departed less than six months in, and clashed at times with Smith in front of staff.

Other employees were also frustrated when, in recent weeks, the show laid off two of the few non-white employees on its production team.

Not mentioned in the Daily Beast article is Smith’s aggressive liberalism, well documented here at the Media Research Center’s NewsBusters. The plight of the people in Cuba has been very much in the news lately. Well, back in 2014, still on Fox, Smith offered this ugly assessment: Freedom and capitalism will “ruin” the communist nation:

Anchor Shepard Smith: “You know the fear among anybody who’s ever been there, or cares at all about the Cuban people, as so many of us do — the last thing they need is a Taco Bell and a Lowe’s. I mean, we don’t need a –”

Smith: “That’s it. But you know, it’s one big idea and it all sort of comes together and, you wonder, are we about to get up in there and ruin that place?”

This kind of liberalism won plaudits from people like Joe Scarborough, who in 2019 cheered, “In Shep we trust.” Perhaps the crash for Smith isn’t complicated: When he was at Fox, sounding liberal brought attention and praise. On a network like CNBC, he just sounds like everyone else.