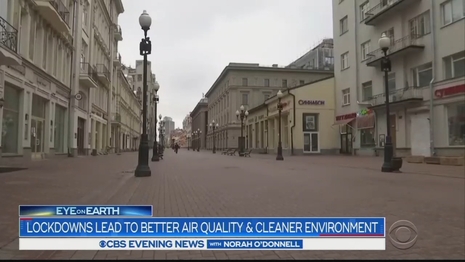 Over the last year, the coronavirus has caused untold misery and destruction. Over three million people are dead. Families have been forever destroyed and businesses have been wrecked by a cruel and unrelenting virus. But that hasn’t stopped a stunningly tone deaf news media from lecturing Americans about the environmental “silver lining” and “gift” of Covid-19. As the world marks Earth Day 2021, it’s worth remembering just how out of touch reporters sound when they put a happy face on a global killer of humans.

It was early on in the pandemic, March 19, 2020, that journalist Vladimir Duthiers first speculated on CBS This Morning about a “little bit of silver lining” to the pandemic. Citing a slight uptick in water clarity in Italy, Duthiers cheered, “This is Venice.... You can never see the waters because they're so murky from all the boats. This time, now you can see the crystal-clear waters of the Venice canals.”

On the April 22, 2020 episode of Today, Al Roker celebrated the environmental upside as the economy ground to a halt: “Less foot traffic, less waste, less energy consumption, allowing certain animals to thrive and impacting the Earth's atmosphere as well.” For the same day’s CBS This Morning, Jamie Yuccas offered a theme that would become common. Humans were the problem:

From a shockingly smog-free new Delhi in India to unusually clear waters in the canals of Venice, the world is suddenly learning what can happen if humans stop polluting the environment.

On the April 11, 2020 early-morning edition of CNN Newsroom, host Natalie Allen gushed about the “bright spot in this era of pandemic.” The April 22, 2020 CBS Evening News sounded practically ghoulish as CBS correspondent John Blackstone gloated, “From goats in a deserted town in Wales, to lions lounging on a road in South Africa; nature seems to be saying, ‘We can get along fine without you.’" 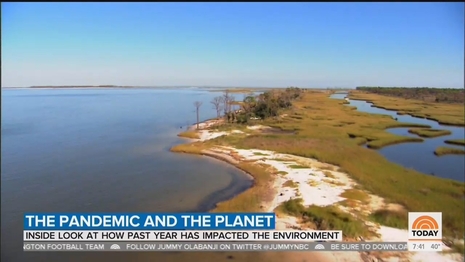 The seeming contempt for humanity continued into the fall. The September 8, 2020 edition of Today featured Roker again expressing his callous disregard for dying humans:

When the world went into lockdown last spring, a brief and beautiful transformation took place. Animals appearing in locations they hadn’t been seen in years. Mountains and skylines revealed after decades of shrouded in pollution.

This stinging dismissal for the mounting death toll culminated in the spring of 2021. On the April 1 Today, Kerry Sanders lectured viewers even as many may have lost someone to Covid-19: “When the nation and world shut down, Planet Earth got a rare break...” He featured University of Miami professor Ben Kirtman who offered this alarming take on the coronavirus: “It's a gift to the science, but it's also a gift to us. To society. To the human race. It demonstrates we can do this.”

Perhaps CNN climate correspondent Bill Weir summed it all up on the April 23, 2020 New Day: “There seems to be this perception that maybe the virus has helped humanity buy some time when it comes to global warming.”

In the 2018 film Avengers: Infinity War, a hulking killer named Thanos snapped his fingers and wiped out half of humanity. He does this in order to find “balance” and make life easier on Earth. In the movie, Thanos is the villain, an unhinged monster. But are his ideas much different from those espoused by many in the mainstream media? Three million dead humans later, these journalists seem to agree with Thanos that people are the problem.