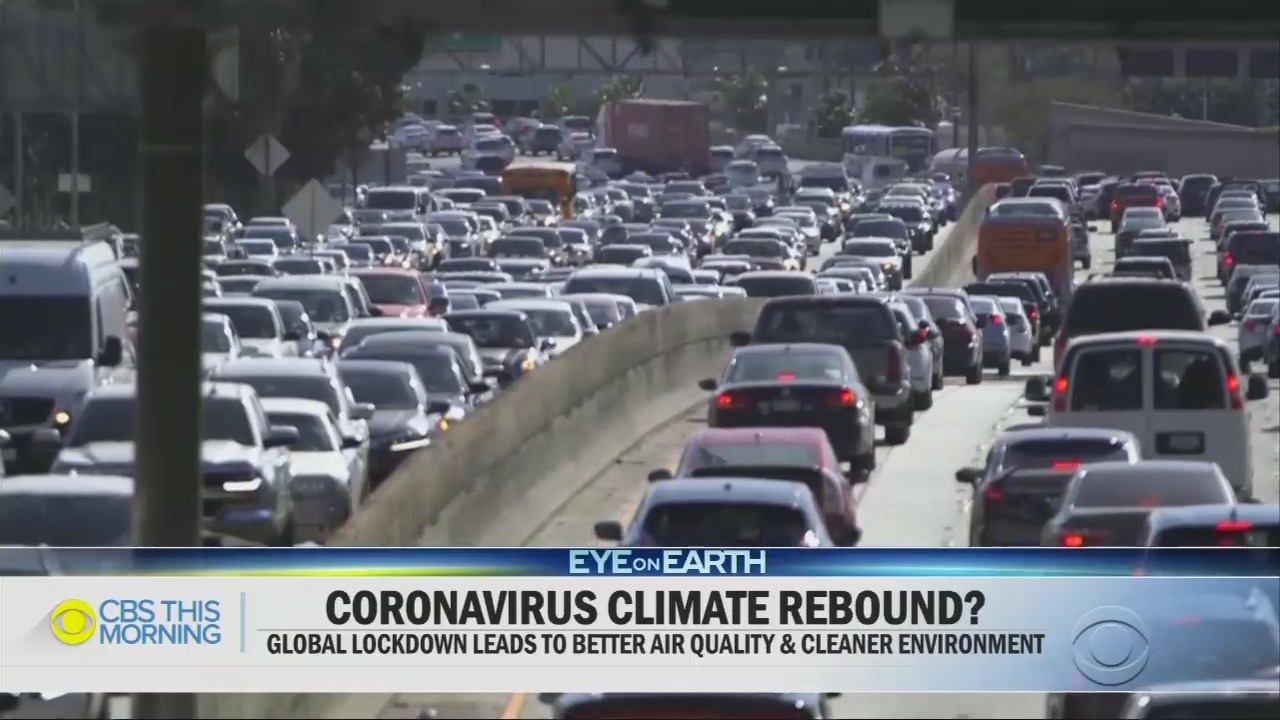 All three networks Wednesday morning shamelessly used the coronavirus pandemic to push their hope for more stringent environmental regulations. Celebrating Earth Day, ABC, NBC and CBS each gave lengthy reports praising the nationwide lockdown’s “silver lining” of less pollution and more wild animals reclaiming their habitats. But they didn’t just point out changes to our environment; they turned into climate activists, actually encouraging us to keep certain pandemic lifestyle changes, such as not driving cars, to make these climate benefits “permanent.”

NBC’s Today and CBS This Morning were the most over-the-top in their reports. Showing footage of smog-free skies, Today co-anchor Hoda Kotb teased the “positive” “benefits” that the nationwide shelter in place orders had on the environment: “From wildlife to the environment, Al will explore the benefits of those shelter-in-place orders across the country and around the world. We have positive news on this Earth day 2020.” Later, co-anchor Savannah Guthrie couched her glee in admitting this crisis had hurt people economically but hey, at least it was “helping our planet.” Meteorologist Al Roker was much more open in admitting he hoped this pandemic brought forward permanent changes to our way of life.

At the top of his report, he hyped, “[T]his crisis may actually be preparing us for the ultimate climate emergency.” Speaking to two climatologists he wondered what we needed to do to keep the climate changes going:

While these signs of renewal are encouraging, climatologists say the change in the air is only temporary and not nearly enough...When the world finally heals, and our societies come back, is there a way to make these changes permanent, without hurting our economy?

NBC also noted that the “silver lining” to this pandemic was making us aware of how humans can “control” how much we contribute to climate change.

CBS This Morning co-anchor Gayle King was also hopeful that these environmental “gains, could last beyond the crisis” if we only took action to change our lifestyles going forward.

Correspondent Jamie Yuccas cheered in her report, “The world is suddenly learning what can happen if humans stop polluting the environment.” She hyped scientists excited by how the absence of cars on the road was helping the environment:

SCIENTIST: Assume all passengers cars are taken off the roads, what would happen to our climate and air quality? This is something we can only test in our numerical models, but then we don't have observations. Now we do.

YUCCAS: Armed with this new data, scientists hope when we do return to our pre-pandemic lifestyles we'll do so with lessons learned during the crisis.

King agreed.“Something to think about there. Many people see this as a major reset for humanity and the planet. I hope we’re all listening and get the lesson,” she scolded.

ABC’s Good Morning America wasn’t nearly as heavy-handed as the other two networks in touting climate evangelism. Meteorologist Ginger Zee cheerfully noted that this pandemic was encouraging “all of us to realize that our choices do impact the environment around us and maybe we can make a healthier balance going forward.” In a later segment, Zee briefly opined how humans were the biggest “problem” to the black bear population.

See the transcripts from CBS This Morning and NBC’s Today, below:

SAVANNAH GUTHRIE: We all know the coronavirus has been just a terrible crisis, a health crisis, an economic crisis, and it's just turned everything upside down, but we thought you'd want to know about some surprising ways that it's actually helping our planet.

AL ROKER: That's right, Savannah. It's the 50th anniversary of Earth day, and with most of us staying home, with this pandemic, it's affecting the Earth in some pretty striking ways. We talked to some experts about how this crisis may actually be preparing us for the ultimate climate emergency.

ROKER: Coyotes roaming the streets of Chicago. Sheep working on the landscaping in Wales. In some places, sea turtles nesting on beaches for the first time in years.

LOGGERHEAD MARINE LIFE CENTER: We predict that with these fewer interactions, if the beach closures go on any longer due to Covid we will see possibly more successful nesting events with the sea turtles.

ROKER: Wildlife around the world ranging freely in cities and regions normally bustling with people. Just one of the ways in which the coronavirus lockdown has quickly and dramatically changed our environment. Less foot traffic, less waste, less energy consumption, allowing certain animals to thrive and impacting the Earth's atmosphere as well. What kind of reductions have we seen?

PETER GLEICK, PACIFIC INSTITUTE PRESIDENT EMERITUS: We've seen reductions in greenhouse gas emissions the gases that contribute to climate change and also seen reductions in some of the typical air pollution, the particulates, the smog, and we've seen remarkably some amazing improvements in air quality.

ROKER: In India for the first time in decades, the majestic snow-capped peaks of the Himalayas were revealed to the people of Jalandhar more than 120 miles away and last week in the normally polluted city of New Delhi, clear skies. Here in the United States, the plummeting emissions were evident almost immediately. Two weeks ago, Los Angeles, a city of nearly 4 million people, and more than 6 million cars, registered the cleanest air on the planet. While these signs of renewal are encouraging, climatologists say the change in the air is only temporary and not nearly enough.

UNNAMED CLIMATOLOGIST: We could be seeing a reduction in our emissions this year in 2020, at the most probably 5%, and while that may sound like a lot, for context, compare that to the roughly 8% that the international climate science community has told us that we need to reduce emissions by year after year.

ROKER: When the world finally heals, and our societies come back, is there a way to make these changes permanent, without hurting our economy?

GLEICK: We can have a strong economy, but improve our air quality, and they're taking steps in that direction. We can reduce our emissions of greenhouse gases by switching from fossil fuels to renewable energy. We know that wind and solar work. We know they're economic. We know they're growing very rapidly.

ROKER: As we come out of this, is there a silver lining?

UNNAMED CLIMATOLOGIST: A pandemic or a financial crisis is nobody's idea of a solution to the climate crisis at all, but if we do look back and see that, you know, with humans, whether we had a choice or not, made changes and the needle moved in terms of the global climate and the environment, that may be seen as a you know, reminder that we're in control and we have a responsibility and the ability to actually move that needle.

ROKER: And guys, we're actually proud to say that NBC news has made reporting on climate change a priority, and so we are now happy to be joining and covering, joining this group called covering climate now. It's a global journalism initiative that is committed to even more and better coverage. It's a story that isn't going to be going away anytime soon. We'll be there to report on it including our NBC news climate unit so we're very excited to announce this alliance coming up.

ROKER: Yeah it really is. Of course once we start ramping back up we’re going to see an uptick in pollution again. So the challenge is how can we keep these changes going forward but bring our economy back to speed?

GAYLE KING: In our "Eye on Earth" series, today is the 50th anniversary of Earth day. We're marking it in ways we never imagined because of this global pandemic that we're all living with right now. Satellite images show a dramatic decline in greenhouse gas emissions thanks to the drop-off in human activity. We're also seeing wild animals roam in very unexpected places. Take a look at that. Perhaps the most obvious environmental change is much cleaner air. That's a good thing aS Jamie Yuccas shows. The big question for climatologists is what happens next.

YUCCAS: This is the new normal for runners in the time of coronavirus. What isn't normal especially here in Los Angeles, is this -- blue skies and clean air. Once the shelter-in-place went in in California, what did you see?

GLORY DOLPHIN HAMMES: We saw that L.A. Had some of the cleanest air quality in the world.

YUCCAS: Have you ever seen it this clear up here before?

GLORY DOLPHIN HAMMES: No, no.

YUCCAS: Glory Dolphin Hammes is CEO of IQ Air. A tech company that tracks global air quality. Two weeks ago her sensors showed something almost unimaginable -- L.A. Had the cleanest air of any major city on Earth.

HAMMES: About a year ago, Los Angeles was ranked the worst air quality in the entire country. And now we're seeing some of the best air quality, not just in the country but in the world.

YUCAS: By some estimates, the pandemic lockdown has taken about 80% of passenger cars off local roads. Iq air's data shows a resulting 31% reduction in air pollution compared to the same time frame last year. And it's not just Los Angeles. From a shockingly smog-free new Delhi in India to unusually clear waters in the canals of Venice, the world is suddenly learning what can happen if humans stop polluting the environment.

ROB JACKSON: But if things go back to normal a week from now, that will be a distant memory. The air will be just like it would have been.

YUCAS: Stanford environmental scientist Rob Jackson says there's historic precedent for that. Global greenhouse gas emissions dropped about 1.5% during the 2008 economic crisis. But within two years, they bounced back and kept growing. He fears the same thing could happen again.

JACKSON: What if when the economy's hurting we no longer care or care to safeguard the environments?

YUCCAS: Although there are signs that's already happening in Washington, Jackson is optimistic about the number of people and companies learning how to telecommute.

JACKSON: If we drive less, it will save time and make things healthier. It doesn’t have to be shelter in home or clean air it can be clean air every day.

YUCCAS: In the meantime, while some crucial climate field science in places like Greenland is being disrupted, the unprecedented shutdown of major cities is also proving to be a boon for other science, as well.

GABRIELE PFISTER: It has allowed us to really look at certain scenarios --

YUCCAS: Gabriele Pfister is a climate scientist studying our environment in conditions no one ever thought would occur.

PFISTER: Assume all passengers cars are taken off the roads, what would happen to our climate and air quality? This is typically something we can only test in our numerical models, but then we don't have observations. Now we do.

YUCCAS: Armed with this new data, scientists hope when we do return to our pre-pandemic lifestyles we'll do so with lessons learned during the crisis.

PFISTER: It has shown us that there are ways that we can make a significant change in the human footprint in our atmosphere and our nature.

GAYLE KING: Something to think about there. Many people see this as a major reset for humanity and the planet.