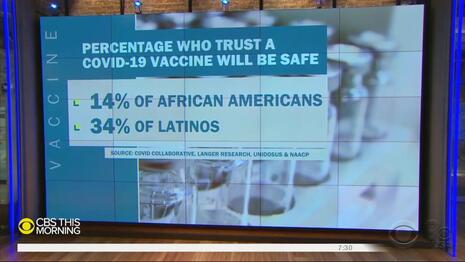 Oh, NOW CBS is concerned with vaccine skepticism? This Morning hosts and reporters on Friday fretted that Americans, particularly African Americans and Hispanics, might be resistant to taking the newly-approved COVID vaccine. Yet nowhere in the segment did Gayle King or reporter Adriana Diaz remind viewers that Vice President-Elect Kamala Harris indulged in anti-science, anti-vaccine propaganda during the campaign.

King opened the segment by worrying, “The FDA could approve emergency authorization, rather, for Pfizer's COVID-19 vaccine as soon as today. But no vaccine will be effective if the people don't take it. In our series Vaccinating America, we're looking at coronavirus vaccine hesitancy, is what it’s called. 60 percent of Americans said they would definitely or probably get a vaccine. But another survey shows only 14% of black Americans and 34 percent of Latinos trust that it will be safe.”

Reporter Diaz agreed: “It is a big problem, Gayle. Skepticism about this vaccine, as we've been reporting, is widespread, especially in communities of color which have been disproportionally impacted by this virus.”

But it was Harris who repeatedly pushed vaccine misinformation during the presidential campaign. As the Independent Women’s Forum noted after the vice presidential debate:

In last night’s debate, Senator Kamala Harris was pushing the familiar anti-vaccine narrative when she said, “If Donald Trump tells us we should take [the Covid-19 vaccine], I’m not going to take it.”

She’s actually calling into question the work, ethics, and professionalism of these public health officials and suggesting that because they work for President Trump, citizens should doubt the vaccine’s safety.

Black Americans – a demographic that has a far greater number of both positive cases and deaths associated with coronavirus – are now even less likely to get the vaccine. According to one recent poll, 58 percent of black respondents said they wouldn’t take a COVID-19 vaccination when it’s available and 22 percent reported they would take the vaccine, but had “concerns”. 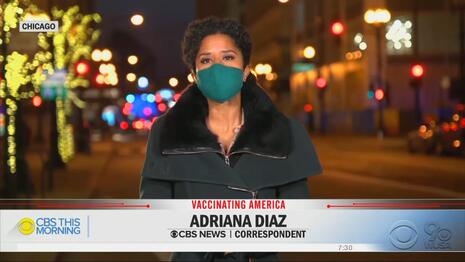 This is exactly the problem CBS claims to now be concerned with. Considering that 87 percent of African Americans voted for Biden/Harris, maybe the misinformation by the ticket should be considered.

As for Biden, even the liberal Politico took notice in September:

Democratic nominee Joe Biden sharply questioned the Trump administration's process for approving a coronavirus vaccine, while expressing broad confidence in vaccines and the scientists who create, study and vet them.

"I trust vaccines, I trust the scientists, but I don't trust Donald Trump," he said at a news conference Wednesday in Wilmington, Del., following a nearly two-hour briefing from his team of health experts.

Yet, Diaz looked at every possibility as to why some Americans might be sympathetic to anti-vaccine conspiracy theories.  Talking to the CEO of a series of health clinics, she wondered, “What are some of the specific reasons that patients say they don't want to take this vaccine?”

During the October 7, 2020 vice presidential debate, moderator Susan Page even broached the topic: “For life to get back to normal, Dr. Anthony Fauci and other experts say that most of the people who can be vaccinated need to be vaccinated. But half of Americans now say they wouldn’t take a vaccine if it was released now. If the Trump administration approves a vaccine before or after the election, should Americans take it, and would you take it?”

Vice President Mike Pence told Harris: “We have five companies in phase three clinical trials. And we’re right now producing tens of millions of doses. So the fact that you continue to undermine public confidence in a vaccine, if the vaccine emerges during the Trump administration, I think is unconscionable.”

CBS’s effort to cover for Biden and Harris’s anti-vaccine propaganda was sponsored by Chase. Click on the link to let them know what you think.

GAYLE KING: The FDA could approve emergency authorization, rather, for Pfizer's COVID-19 vaccine as soon as today. But no vaccine will be effective if the people don't take it. In our series Vaccinating America, we're looking at coronavirus vaccine hesitancy, is what it’s called. 60 percent of Americans said they would definitely or probably get a vaccine. But another survey shows only 14% of black Americans and 34 percent of Latinos trust that it will be safe. Adriana Diaz spoke to an influential local leader in Boston who is having trouble persuading people to get the shot. It is a problem. Adriana, good morning to you. It is a problem.

ADRIANA DIAZ: It is a big problem, Gayle. Skepticism about this vaccine, as we've been reporting, is widespread, especially in communities of color which have been disproportionally impacted this virus. So how do you undue decades of mistrust. One strategy is to spread the vaccine gospel.

LIZ WALKER: You see, we say that, but do we mean it.

WALKER: Everything good comes from God.

DIAZ: Her focus now is spreading the truth about the vaccine. Half her congregation said they won't take it. Some believe god will save them.

WALKER: I always respond that, “Yes, you should put your trust in God, but remember, god uses doctors, God is speaking through science. [Clip from 1980] President Carter and Ronald Reagan.

DIAZ: The former news anchor turned preacher says in her Boston neighborhood which struggles with violence and disinvestment, skepticism about the vaccine stems from years of trauma and broken trust.

WALKER: Once you have been traumatized by the world, by the police, by the doctor, by the system, you tend not to trust anybody. [Clip from Walker speaking.] We don't know much about this pandemic.

DIAZ: To rebuild the trust, she's fighting fear with facts. Serving on a task force created by Massachusetts Governor Charlie Baker to ensure that the vaccine is distributed equitably.

WALKER: I wanted to let them know they have a responsibility, though I think they knew it and still know it to be transparent.

DIAZ: On a whim, she invited Dr. Anthony Fauci to church, well virtual church, to speak directly to her parishioners.

ANTHONY FAUCI:  The speed with which it's been done does not compromise safety, don't deprive yourself of the advantage of an extraordinarily important advance in science by not getting vaccinated.

DIAZ: How hard has COVID-19 hit your patient population?

RAUL GARZA: I mean it is has been pretty devastated.

DIAZ: Raul Graza operates Aunt Martha’s Health and Wellness, which operates 23 community health centers across Illinois, nearly 90 percent of the patients are African-American and Latino, groups that are dying of COVID at nearly three times the rate of white Americans. What are some of the specific reasons that patients say they don't want to take this vaccine?

RAUL GARZA (Aunt Martha’s Health and Wellness CEO): They're curious about whether the trials were culturally specific to their own population. I think it is about just patients feeling like there is still discrimination in health care and why would they have confidence in a vaccine when they've been neglected historically?

DIAZ: Most notoriously, the Tuskegee syphilis study. From 1932 to 1972, the U.S. government experimented on African-American men letting them suffer from the disease even after a treatment existed. And for Hispanics, according to the census, they're the lead likely of any ethnic group to visit a doctor. Garza said an effective way to reach minorities is through images that look like them.