The New York Times’s bias and shoddy journalism played out yet again on Twitter. Over the weekend, the paper was forced to delete tweets after a bizarre series of postings meant to promote the paper’s latest hit job on Brett Kavanaugh. Regarding the book excerpt claiming that a college-aged Kavanaugh exposed himself at a party, The Times's @NYTOpinion weirdly began, “Having a penis thrust in your face at a drunken dorm party may seem like harmless fun...” Wait, what?

The tweet continued, “But when Brett Kavanaugh did it to her, Deborah Ramirez says, it confirmed that she didn’t belong at Yale in the first place.” 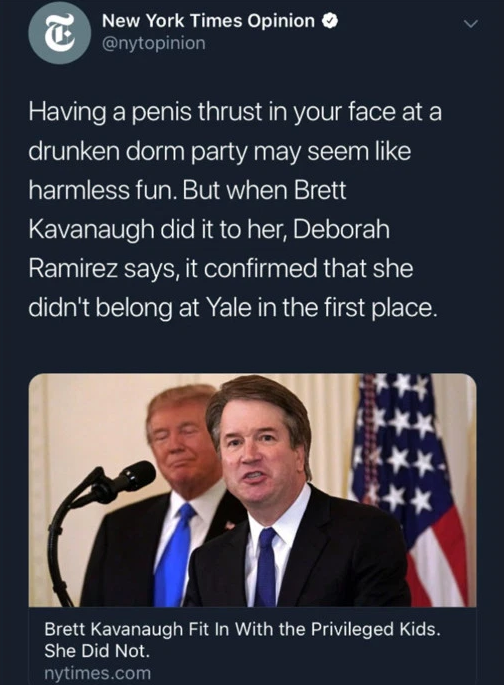 As The New York Post reported, this tweet was posted at 5:13pm. It was quickly deleted. Two minutes later, another tweet appeared: “We have deleted an earlier tweet to this article that was poorly phrased.” 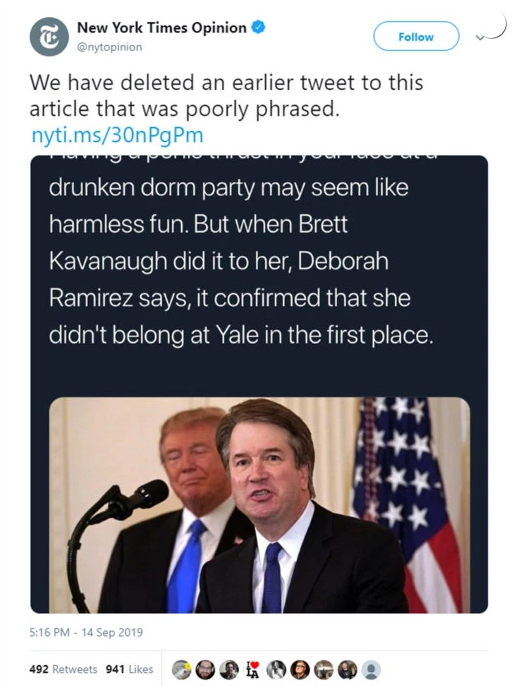 New York Post writer Laura italiano noted, “Soon after, that retraction also vanished.” Around 11pm, another tweet appeared, attempting to clean up the mess: “We deleted a previous tweet regarding this article. It was offensive, and we apologize.” 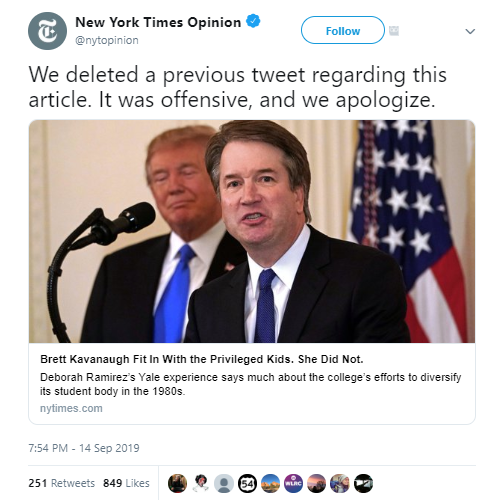 This one hasn't been deleted. (So far.)

On Sunday night, an updated version of the article in question appeared, “The female student declined to be interviewed and friends say she does not recall the episode.”

Last week, on September 11, @NYTimes tweeted: “Eighteen years have passed since airplanes took aim at the World Trade Center and brought them down.” After much mockery for blaming inanimate objects instead of Islamic terrorists, the paper deleted that tweet as well.

In August, Times editor Tom Wright-Piersanti had to delete old, anti-Semitic tweets from his own account, including wishing people a “Crappy Jew Year.” 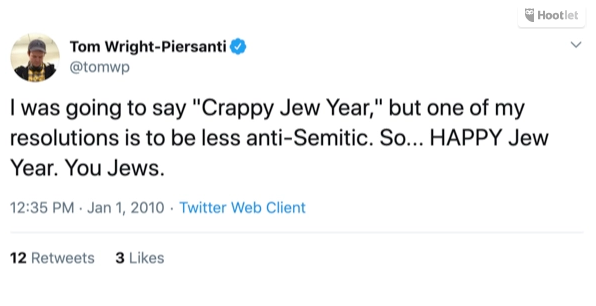 Given the problems the Times is facing regarding journalistic integrity and objectivity, it’s not surprising the paper is struggling so much (and deleting so often) on Twitter. After all, the Times Twitter pages only reflect what the paper represents.