In an effort to avoid discussing terrorist culpability for 9/11, the New York Times on Wednesday embarrassed itself with a tweet and article commemorating September 11, 2001.  Speaking of inanimate objects, the Times Twitter page declared, “Eighteen years have passed since airplanes took aim at the World Trade Center and brought them down.” 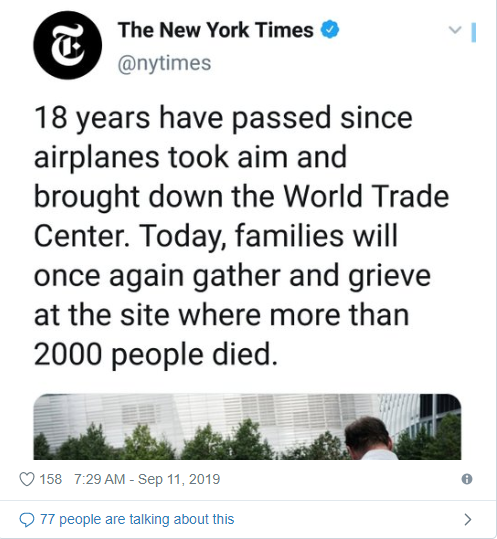 It’s the airplanes who are to blame?

The second paragraph of the Times story, by writer James Barron, contained the same cringe-inducing sentence: “Eighteen years have passed since airplanes took aim at the World Trade Center and brought them down.”

After a torrent of mockery, the Times attempted to fix the damage. The offending tweet has been deleted and this correction offered:

Speaking of deleting tweets, it was just two days ago that the Times had to remove one calling Communist Mao Zedong “one of history's great revolutionary figures.” As the Washington Examiner pointed out, the paper ignored that he was also responsible for the deaths of 45 million people.

As for the Times's 9/11 article itself, it has also been updated with a sentence that is now grammatically and historically accurate:

Eighteen years have passed since terrorists commandeered airplanes to take aim at the World Trade Center and bring them down.

(For more examples of the Times trying to anthropomorphize inanimate objects, see this example where guns have names.)