Gayle King, the CBS This Morning co-host and a Democratic donor, on Wednesday attempted to rehabilitate former Congressman Jesse Jackson Jr., a man who went to prison for campaign finance violations. King interviewed Jackson and Jacqueline Jackson about a new book collecting letters the mom wrote to her son.

King introduced, “The former congressman served eight terms in the U.S. House of Representatives from 1995 until his resignation in 2012. Now he and his mother are sharing how they got through this prison sentence in a new book. It’s called Loving You, Thinking of you, and Don't Forget to Pray: Letters to My Son in Prison.”

Earlier this week, King was identified as a “supporter” and “friend” of another Democrat, Cory Booker. Despite her conflict of interest, CBS still let the co-host interview the 2020 Democratic contender.

According to the website Open Secrets, King has donated to Harold For Jr., Barack Obama, the DNC. All Democrats. She attended then-President Obama’s birthday party and vacationed with the family.

The co-host is also lobbying for liberal Oprah Winfrey to run for president in 2020.

A transcript of Wednesday’s segment is below: 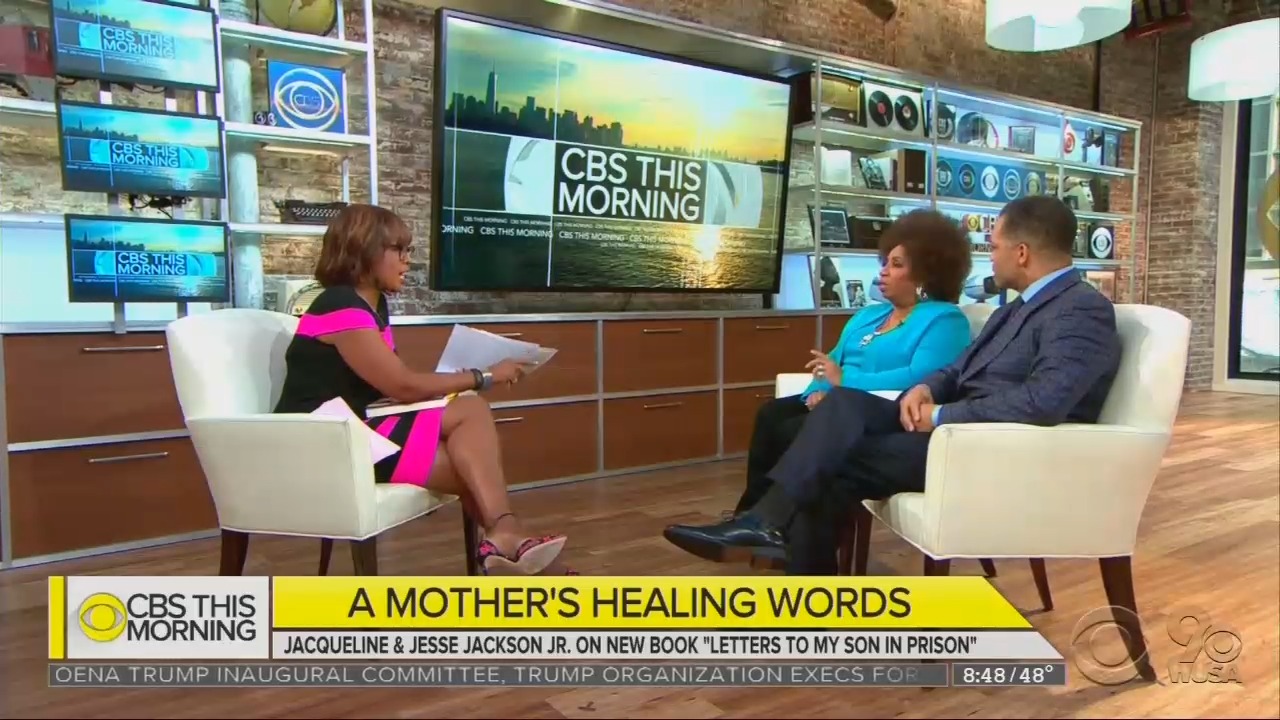 GAYLE KING: That was former Illinois congressman Jesse Jackson Jr. after being sentenced to 30 months in federal prison for campaign finance fraud. He's the son of civil rights activist Jesse Jackson Sr. and Jacqueline Jackson. The former congressman served eight terms in the U.S. House of Representatives from 1995 until his resignation in 2012. Now he and his mother are sharing how they got through this prison sentence in a new book. It’s called Loving You, Thinking of you, and Don't Forget to Pray: Letters to My Son in Prison. The book features personal letters that Jacqueline wrote to her son every single day during his incarceration. Jacqueline Jackson and Jesse Jackson Jr. join us to discuss. Welcome.

JACQUELINE JACKSON: Thank you for having us. I want to give my son some more lipstick that I gave him yesterday. Come on.

KING: He won't do it today. The reason I wanted to talk about this book is because neither of you intended for this to be a book. Jesse, when you were sent to prison, you even said to the family, forget me, leave me alone. I don't want any communication. Because you were humiliated and embarrassed, you said. Just forget me.

JESSE JACKSON JR.: I felt that I had brought enough shame, enough embarrassment, and I was ashamed. I was catatonic during that period and I didn't want to be remembered. Didn't want to be a burden for my children, my mother and father. Just let me go to prison and leave me be. My mother was determined not to abandon me. I saw men in prison who were abandoned, and she was determined to write me every day and pull me out of the very dark place that I found myself in.

KING: You wanted to do that why, Jacqueline?

JACQUELINE JACKSON: I ran into a 17th century poet. He was Richard Lovelace, and he said, “Stone walls does not a prison make, nor iron bars a cage.” And it was a poem that he wrote to his love Althea. And the poem is called "To Althea From Prison." And he was simply saying this is where you are, your circumstances will not define your character. This is just a bump in the road. And the difference in a stumbling block and an obstacle is on —  it is in how high you lift your feet. So we're going to get through this, and you're going to be much better as a result of this experience.

KING: What struck me about the letters was the simplicity of them. Just day-to-day stuff. “Do you have a window? How large is your bed in your bedroom? Is there a bathroom in your room. Are you locked away? Why haven't I heard from you. Thanksgiving was almost uneventful until your call. We missed your presence, so we didn't laugh as much.” What did those letters do for you?

JESSE JACKSON JR.: I think, Gayle, when I went into prison and I was receiving them every day, they were sustaining me. They were giving me a sense of what was happening at home. When I got out of prison and reread the letters, I reread them for perspective. My mother was sharing with me that, again, the circumstances of incarceration were not defining of who I was. But Gayle, I saw men in prison who were not receiving letters. They were not receiving communications. And every day, again, at 4:00 at mail call, they would say, “Jackson and Jackson and Jackson.” And I would watch men who were excited about the prospect of receiving mail but the only one who was receiving mail was me.

JESSE JACKSON JR.: I would give them my mother's letters and say, this is what my mother has to say about all of us today.

KING: Jacqueline, this was a stumbling block. It really wasn't a stumbling block. He was a grown man. You were convicted of stealing campaign —  taking money from your campaign, $750,000. So it wasn't —  it was a self-inflicted wound.

JESSE JACKSON JR.: No doubt about it. I accepted full responsibility for my behavior.

KING:  Have you thought about why you did that?

JESSE JACKSON JR.: You know, over ten years, that's the nature of the offense. And the government concluded about $75,000 a year were expenses that were not justifiable. And rather than drag my family through that entire process, it was really a long build-up to some depression because I have to tell my mother at some point in time just how extravagantly I've been living, and that I'm going to prison. I shared it with my father first. If I refused to share it with her until I finally broke the news to her and that was very painful.

JACQUELINE JACKSON: All parents have high expectations for their children. You don't give birth to trash. Mothers love their children. And there are millions of women who shared the pain and still share the pain that I shared during this experience. And what we are trying to do now is put a dent into recidivism. Seventy two percent of young men and women incarcerated return. And we don't want that to happen. So, —

KING: I think it's important to say, you're not forgiving what he did.

JACQUELINE JACKSON: Crime hurts. Crime causes hurt. Justice repairs. And we need to begin to look at the —  our system, the penal institution, as a place to repair and make people whole. And that is the purpose of this.