Who better than Chelsea Clinton, the daughter of accused rapist Bill Clinton, to talk about the allegations against Brett Kavanaugh? In an interview, CBS This Morning co-hosts on Wednesday NEVER mentioned the awkwardness of talking to Chelsea about a powerful man abusing women.

Awkwardly avoiding individuals like Juanita Broaddrick, Gennifer Flowers and others, Gayle King instead asked about different claims of assault: “What did you think during the Brett Kavanaugh hearings? I was dying to know when we were sitting there and we were all there covering it and the Clinton name came up in his opening statement.”

Referencing her father, the man credibly accused of rape, unwanted sexual touching and harassment, King sympathized,“Did you call your mom or your dad and say, ‘Can you believe he just mentioned my name?’” Highlighting Hillary Clinton, who worked to dismiss the multiple accusers of her husband, the co-host parroted, “Your mom said the performance and behavior [of Kavanaugh] was quite out of bounds and clearly she had some issues with it.”

Co-host Bianna Golodryga cited Christine Blasey Ford and worried that women might not come forward now for fear of being belittled: “She reached out to her local Congressman, said it was her civic duty, wanted to be anonymous, didn't want to become public the way she has now and then we see the result. What is your response to those who might say, 'You know what? I was going to do that. But I don't need to go through that.'"

It might have been a good time to press Chelsea Clinton on what defenders of her father said in the '90s about women who spoke out. For instance, James Carville infamously attacked female accusers of Bill Clinton, saying, “If you drag a hundred dollar bill through a trailer park, you never know what you'll find.”

Of course, none of this came up. Instead, it was Mrs. Broaddrick, who, after Clinton's appearance on CBS, tweeted this blunt question to the former First Daughter: 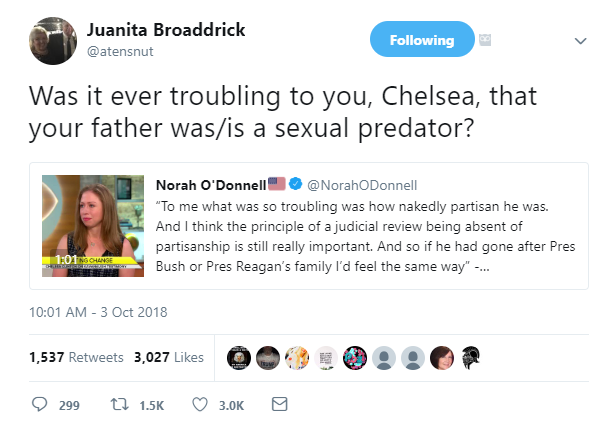 Once again, members of the liberal media protect a Clinton family member from talking about the former President’s accusers.

NORAH O’DONNELL: Chelsea Clinton is encouraging children to make a difference in their communities. The best-selling author and former first daughter has written several books and the empowerment of women. Her latest book Start Now: You Can Make a Difference" teaches young people how to create change. Chelsea Clinton is the Vice Chair of the Clinton Foundation and teaches part time at Columbia University here in New York. Good morning. 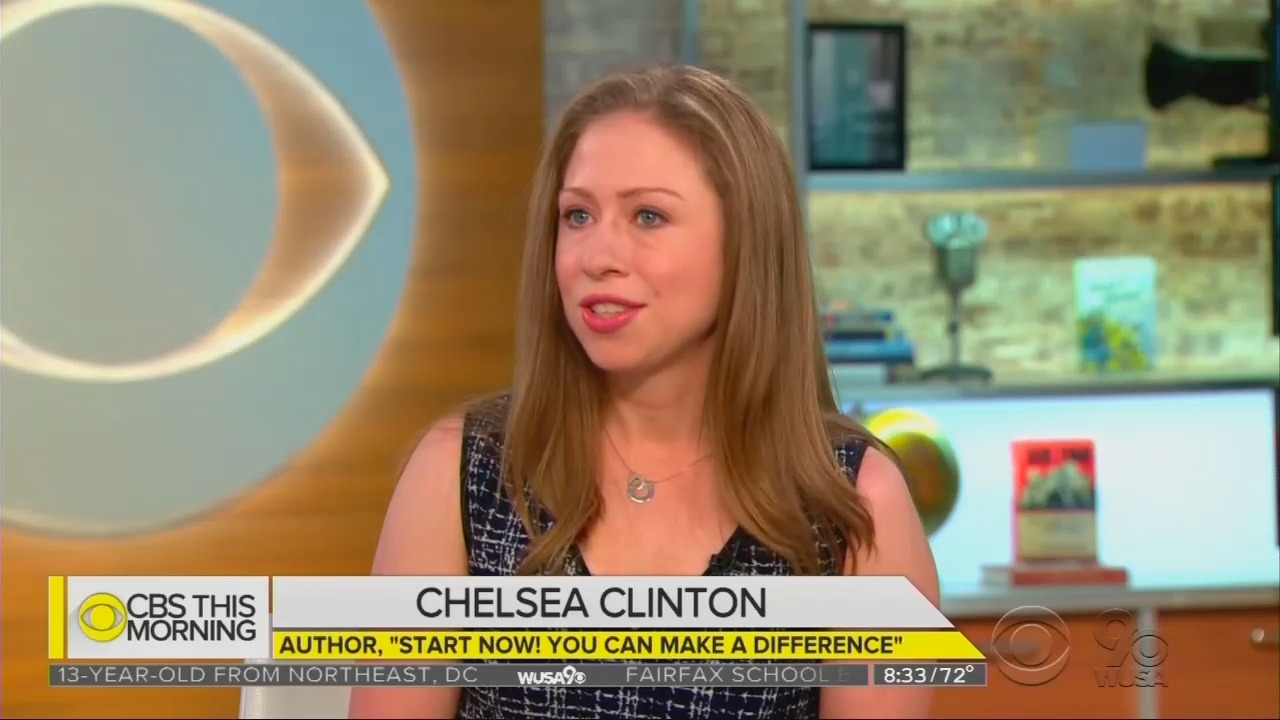 O’DONNELL: Good to see you. Here it is. I put it on a little post it on the front of my book. Page 106. Kindness creates more kindness.

CLINTON: I believe that deeply and I hope my young readers put as many sticky marks as you both did. I feel like that will be a real mark of success.

O’DONNELL: I do want to talk about so much in the book, but I also want to get your take because we don't get to talk with you often about what's happening in the news. We saw the President of the United States, Donald Trump, last night mock Dr. Christine Blasey Ford’s testimony in a campaign-style rally. What did you make of that? 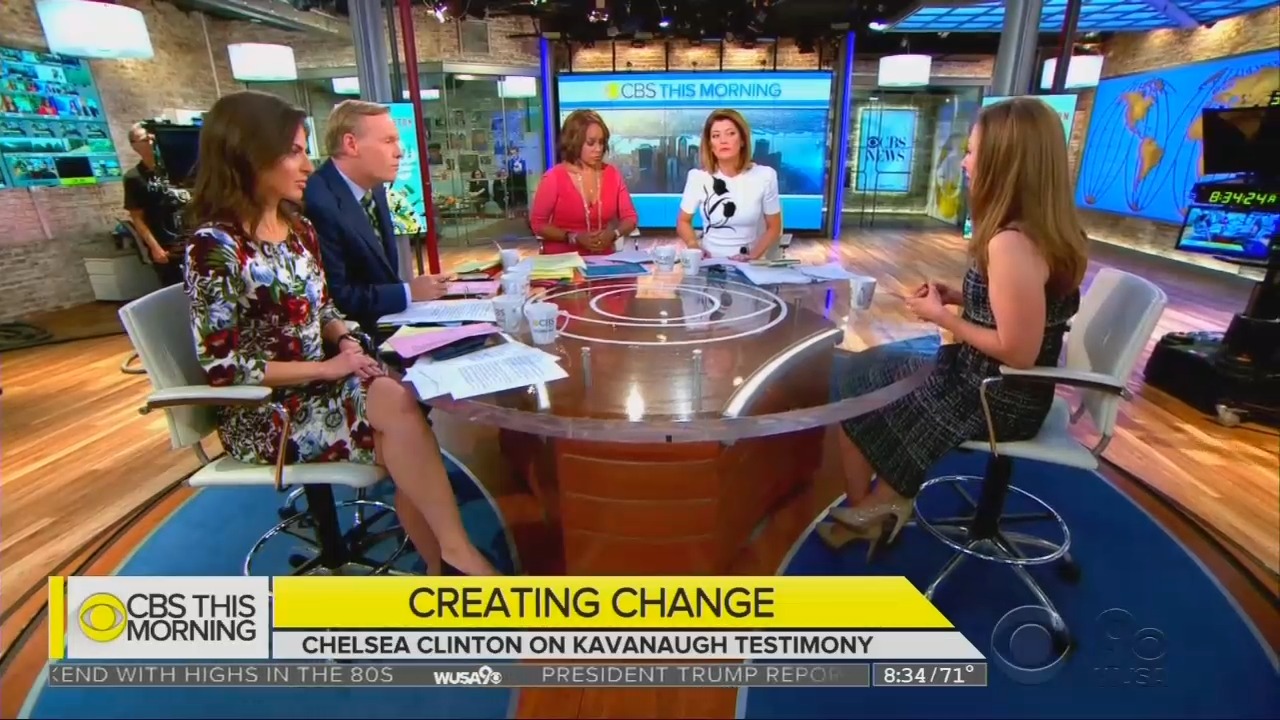 KING: What did you think during the Brett Kavanaugh hearings? I was dying to know when we were sitting there and we were all there covering it and the Clinton name came up in his opening statement. Did you call your mom or your dad and say, “Can you believe he just mentioned my name?” You all must have had a discussion about it. What was that like?

CLINTON: Well, I didn't watch it live because I was at an event at Yale.

KING: But you heard about it.

CLINTON: Oh, I watched it when I got home.

CLINTON: I just thought, “Oh, my gosh, we loom so much larger in your mind than you loom, at least in mine.” I don’t think I heard his name until he was nominated weeks ago. But to me, what was so troubling was how nakedly partisan he was. I think the principle of judicial review being absent of partisanship is still really important. So, if he had gone after President Bush or President’s Reagan's family, I would feel the same way. I just don't think that's healthy as a dynamic on the Supreme Court or really, candidly, any court.

KING: Your mom said the performance and behavior was quite out of bounds and clearly she had some issues with it. Do you think he should be confirmed to the Supreme Court?

CLINTON: I don't. I’ve opposed his nomination from the beginning because I don't believe with his stance on multiple issues and worry about issues that I really care about, whether it's workers' rights or women's rights or protecting the environmental, many things that the Court is expected to rule on in the future. So admittedly my opposition to him is rooted in policy. But I now am even more intense in my feelings because of how political he's become.

BIANNA GOLODRYGA: Chelsea, one of the things that you've really promoted is reaching out to politicians. That children should start young and reach out to their local politicians especially. I wonder what your response is after seeing Dr. Ford’s plight after she did just that? She reached out to her local Congressman, said it was her civic duty, wanted to be anonymous, didn't want to become public the way she has now and then we see the result. What is your response to those who might say, “You know what? I was going to do that. But I don’t need to go through that.”

CLINTON: Well, I would say that I understand that and I hope you're still willing to raise your hand, raise your voice. I think we need more people engaged in the political process at every level, not fewer. So while I completely see, Bianna, that it could have a chilling effect, I hope that it doesn't.

DICKERSON: What about public service more broadly? You talk about kindness, which is fundamental to the human experience and yet —

DICKERSON: Well, right. At least fundamental human happiness. But we see our public life get more corrosive, more vinegar-ish. How do you teach kids, oh, no. If you believe in this thing, you'll get past it?

KING: You're encouraging kids to get involved early, even though you can’t vote. You can’t participate in the political process.  There's a great story of  you wrote at five that you wrote a political letter. To who about what?

CLINTON: I wrote to president Reagan when I was five because I heard he was going visit a cemetery, with my rainbow heart sticker as a gesture of good will.

CLINTON: I didn't think an American president should be paying his respects to fallen German soldiers including fallen German soldiers that included Nazis. So, I wrote him this letter saying I had seen The Sound of Music. I knew they weren’t nice people. I hoped he didn’t go to the cemetery. He still did go to the cemetery. I never got a response. I think the optimistic end to the story is that when we were moving to Washington, my parents said, like, “What do you hope to have from this experience?” And I said, “I think every child should get a response.” Every child that writes the president should get a response. And so, my parents set up the first White House correspondents unit just for children and President Bush continued that. President Obama continued that. I have no idea if President Trump is continuing that. But I hope so.

GOLODRYGA: In this era of bullying, something that you endured in the public spotlight as the first daighter, what is your advice to parents who are concerned that their child may too be bullied in this era of social media, which you didn’t really have so much of growing up?

KING: And you talk about bullying in the book, too.

O’DONNELL: Happened to be at a school event recently and one of the teachers talked about teaching young people about sexual violence, and that was -- I don't know if that's because that's the sign of the times. But that's now part of the curriculum and teachers are available to teach them about at that certain age.

KING: Well, with all the chapters you end with “start now” and give very specific steps on what the kids can do. And you know it’s a kids book when chapter one is “Water, Weather, and Why We Don’t Drink Our Poop.”