CBS Urges Oprah to Run Against Trump: You ‘Heal and Connect All People’

CBS This Morning co-host Gayle King on Tuesday urged her best friend Oprah Winfrey to run against Donald Trump in 2020. King even absurdly insisted she could stay on at CBS and cover the race “impartially.” The co-host, it turns out, has been lobbying her friend to run for months. On the show, King pleaded, “But I also think you have a unique ability in terms of healing and connecting all people.”

After all this, King disputed the idea that a potential Winfrey run might compromise her as co-host of CBS This Morning: 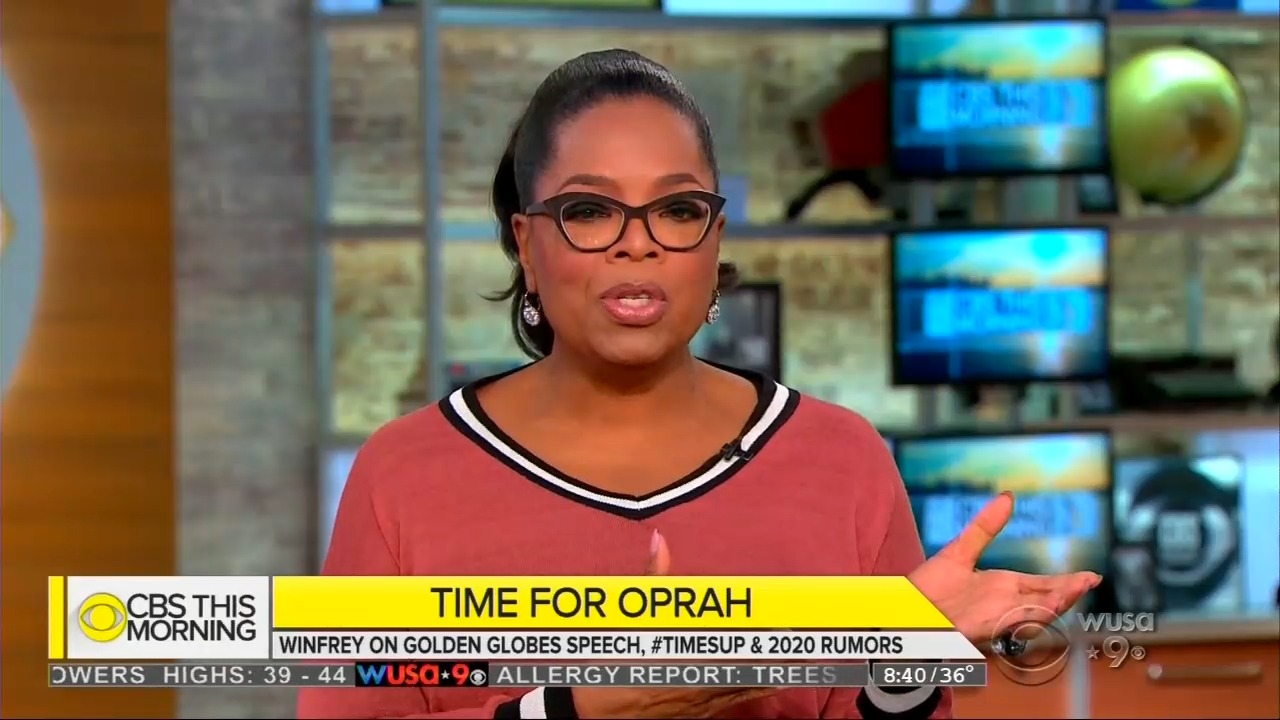 It’s possible King was joking on that last point, but given how aggressively she’s promoted a Winfrey run, maybe not. On February 15, King revealed that she was pushing her liberal friend to oppose Trump since before Winfrey’s famous Golden Globes speech.

Of course, CBS has never seen a problem for King to support Democrats and then talk to politicians on This Morning. In 2012, she attended a fundraiser for Barack Obama’s reelection. Who also was there? Winfrey. On August 6, 2016, King attended Obama’s 55th birthday party.

GAYLE KING: We are pleased to welcome — listen, she's an actress, philanthropist, media mogul. But she's also a 60 Minutes special contributor — we like saying that.

OPRAH WINFREY: I am.

Oprah's back in studio 57. The reason why I'm so excited about this story is because you were so excited. You took it to 60 Minutes. 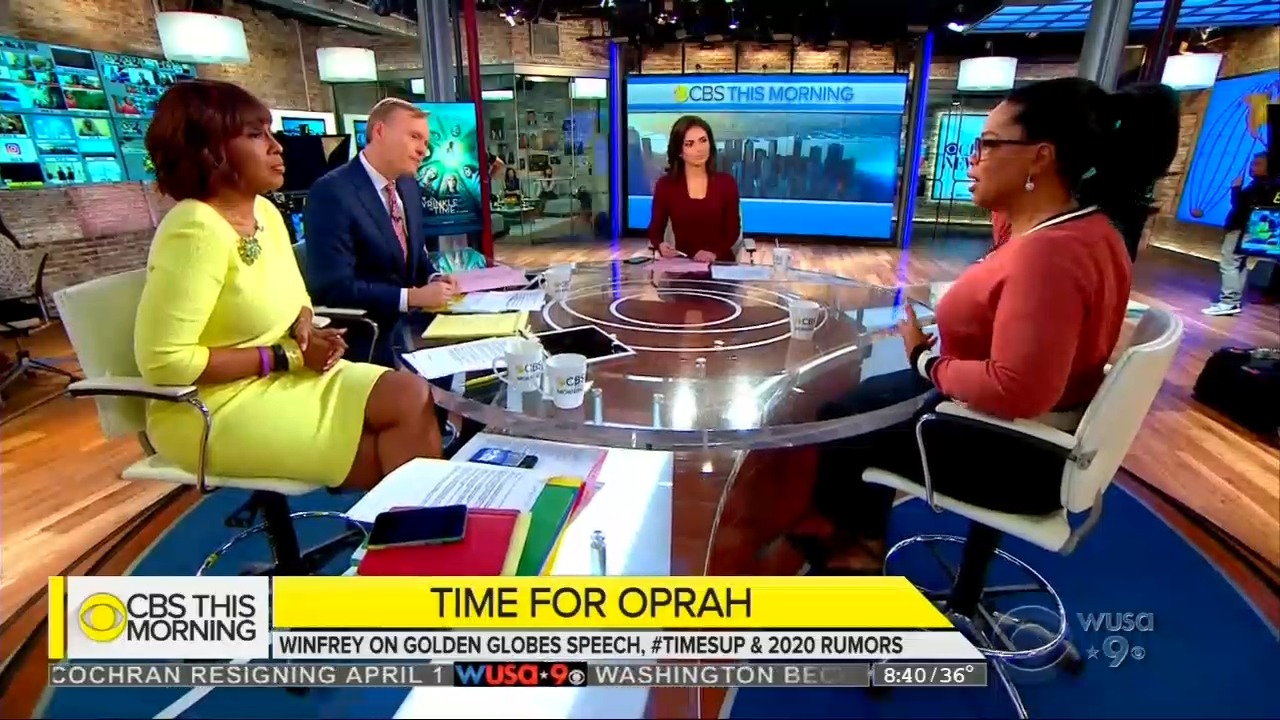 KING:  Oprah will stay around for another segment. She's promoting 60 Minutes, of course. But she's also going to talk about Wrinkle in Time and we'll talk about the presidency. We're going to go there.

WINFREY: No, you're not.

[Clip of Winfrey at the Golden Globes.]

KING: That was Oprah's very powerful acceptance speech at the Golden Globes when she condemned a culture broken by brutality by brutal —  by brutally, rather, powerful men. Her speech, you know, started immense speculation that she was considering a presidential run in 2020. We'll talk to Oprah about that and her new movie coming up. It is part of your narrative. It’s sort of like, “You get a car, you get a car, you get a car.” Forever, that's going to be part of your narrative. But we'll talk about it.

WINFREY: Yes, I did.

KING: You want to make sure that the kids who want to get there can get there.

WINFREY: That's right. For kids who want to come from all around and get there and can't afford to get there.

KING: Are you planning to be at the March?

WINFREY: I'm not planning to be at the March. I not the March should be about the children.

JOHN DICKERSON: Let me ask you about this call for you to run for President.

KING: You already said no that it’s not in your DNA.

DICKERSON: I'm interested in the notion of when you hear the call about whatever you do, how do you know now's the time for me to step in and step up?

WINFREY: It's something you will feel. I will tell you all that I was —  actually, I was in Maui preparing, rehearsing the speech. That's where you first heard the speech, in the gym in Maui. Gayle comes in, and I said, "I want you to hear this speech" they was doing at the Golden Globes. And Gayle goes, "Look, uh, I just want to talk to you about something. I know — ”

WINFREY: Yes, but. You said, "It's not going to be good for you, but I think it would be good for the country." I'm like, get out of here. I wanted you to listen to the speech. So I believe that for everything that anybody does there's a feeling not just voices outside yourself telling you to do something, but there's a feeling that you have about, yes, this is the direction I should move in.

DICKERSON: Is that feeling grace? Some call that grace. Grace gives you the ability to see or is it —

WINFREY: I think it is -- it is an instinct, an intuition, it is an —  I call it your internal guidance system, your own personal GPS that says this is the way.

KING: I also think nobody should be convinced to run —  to run for the presidency. But I also think you have a unique ability in terms of healing and connecting all people. And I —

WINFREY: I have great compassion for people. I do that.

WINFREY: I think you need more than compassion to be the president of the United States.

WINFREY:   She would say, “Baby, listen to your own heart.

BIANNA GOLODRYGA:  I read that somebody said if you ran, the day you decided to run, half the country would hate you immediately.

WINFREY: That is true.

KING: Why are you telling her that, Bianna?

KING: You are not helping.

DICKERSON: She’s looking out for you, Gayle.

GOLODRYGA: She’s always looking out for you and us.