CBS on Friday admitted that This Morning co-host Gayle King, a Democratic donor, is actively lobbying her liberal friend Oprah Winfrey to run for president. Does anyone see this conflict of interest as a problem? Previewing a segment from Sunday’s 60 Minutes, Winfrey recounted what happened after her Golden Globes speech, “When there was so much talk about it and Gayle [King] was, like, every day saying, ‘You should think about it. You always say when things show up, you should think about it.’”

The This Morning co-hosts even laughed about the confession. Norah O’Donnell noted, “Now we know you've been encouraging her to look at it.” Showing no conflict about her role as a journalist vs. her friendship with the liberal Oprah, King responded, “Yes, I have. My name is Gayle, G-A-Y-L-E. Yes, I have.”

All of this at least bothered co-host O’Donnell a bit. Speaking of Winfrey’s role as a special contributor to 60 Minutes, she insisted: “She can't consider running for president and be on 60 Minutes. She can't. You just can't do those two things.”

King brushed that off as a problem for the future: “Or she can leave 60 Minutes.”

Of course, CBS has never seen a problem for King to support Democrats and then talk to politicians on This Morning. In 2012, she attended a fundraiser for Barack Obama’s reelection. Who also was there? Winfrey. 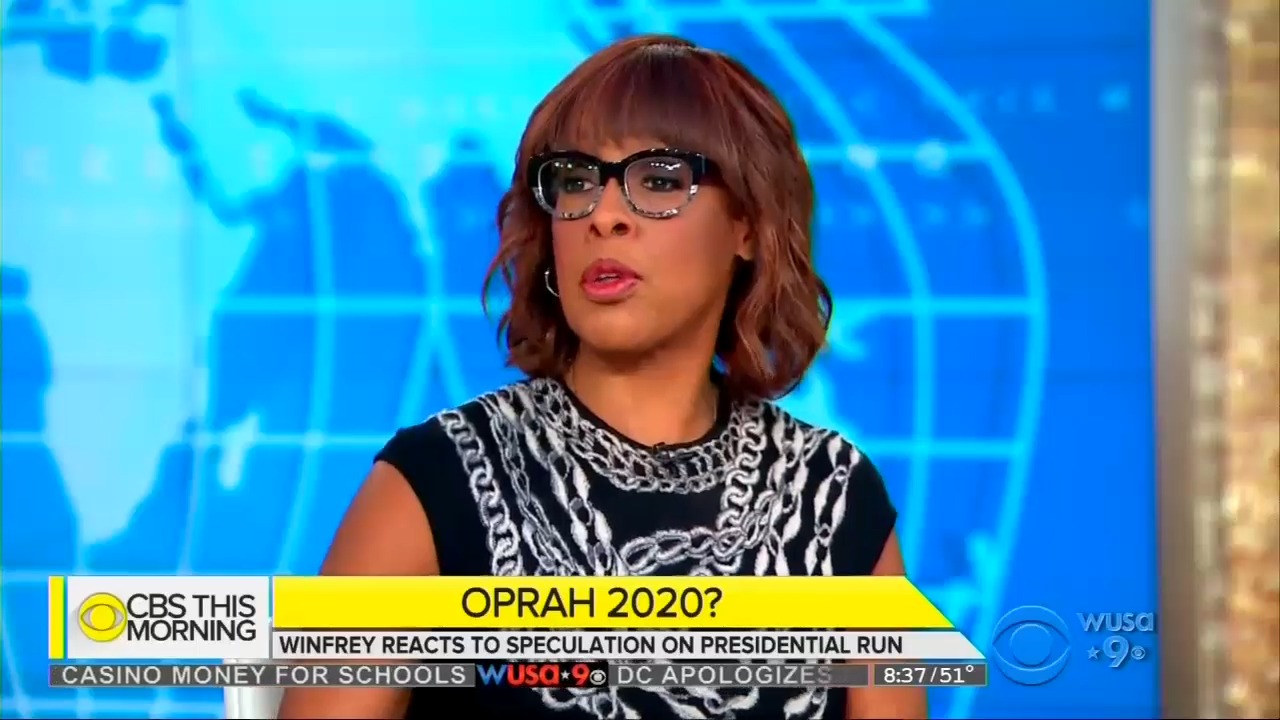 On August 6, 2016, King attended Obama’s 55th birthday party. After reporter Dana Jacobson highlighted a New York Times story on the secrecy of the Obama White House bash, then-co-host Charlie Rose blurted, “Did you tweet anything [at the party]?”

King replied, “Oh, no. They ask you not to tweet. I'm not tweeting a thing.” She bragged, “It was a very nice tribute to him [Obama]. The last time in the White House and I can say a good time was had by all."  An excited Rose wondered, “And you danced with the President?”

A transcript of the February 15 segment is below. Click “expand” to read.

NORAH O’DONNELL: First on CBS This Morning, we hear special contributor Oprah Winfrey's reaction in a 60 Minutes interview about a presidential run. Last fall in her first assignment for 60 Minutes Winfrey talked to political voters about the divide in our nation. For Sunday’s broadcast, she returned six months later to the very same place, grand Rapids, Michigan, to follow up with the same group. The panel brings up rumors of a presidential run fueled by her powerful Golden Globe speech. In an interview she explains her motivation twine behind that speech and weather politics is in her future. 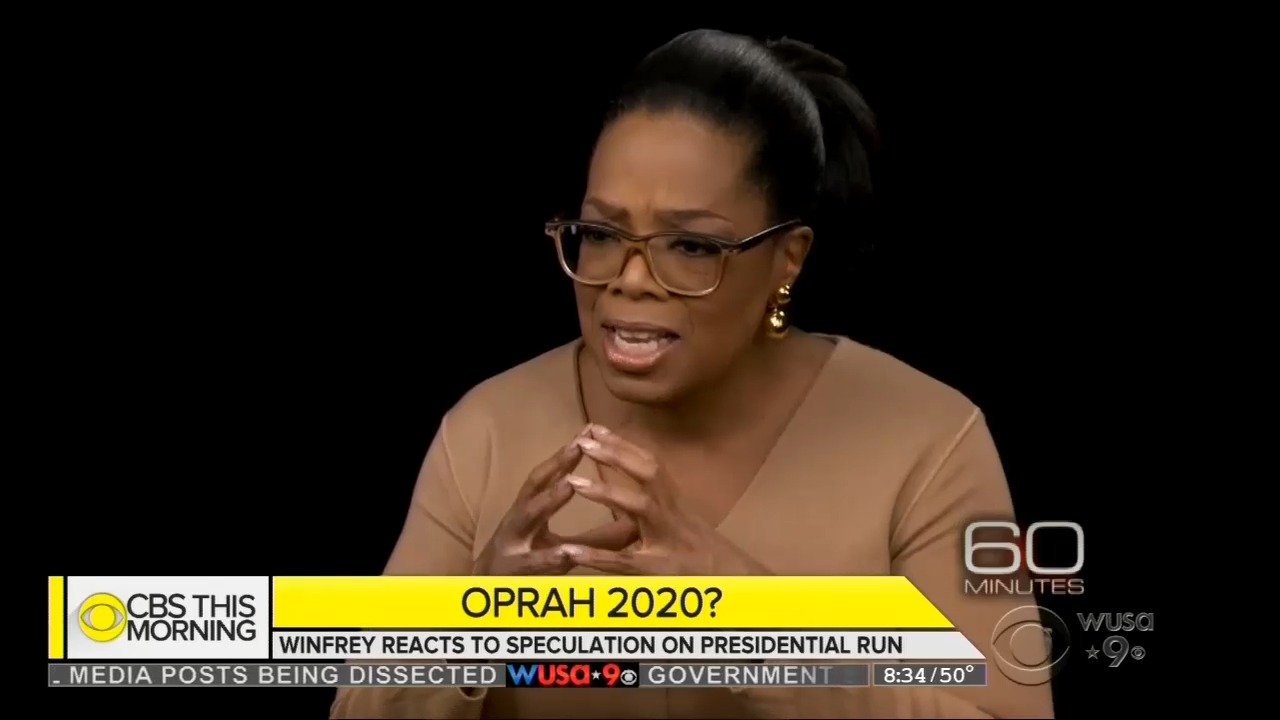 OPRAH WINFREY:  I was looking for a way to express what was going on in this moment in terms of gender and class and race.

WINFREY:  I cared about landing that speech in the room, and then I was worried about not getting cut off because they told me to take out three minutes and I couldn't. I had it already in my head. So the whole time I'm there and somebody applauded, I'm like, seven, eight, nine, eight seconds gone. Sit down, everybody, okay, I've got to finish this.

WINFREY: And I was kind of stunned by it. I walked off with that feeling like, okay, that's done. And then I get back to the press room and I hear the whole thing's trending and 2020. So, I thought, what?

ANN SILVIO: I had asked you whether you thought 60 Minutes viewers would have this presidential run thing --

WINFREY: I think if I still was leaving the question out there and hadn't formally said I am not running for president of the United States --

SILVIO: And you have. You have done that?

I mean I —  there was a lot of other things too. There was Gayle and there was Stedman.

WINFREY: I actually will say this. When there was so much talk about it and Gayle was, like, every day saying, “You should think about it. You always say when things show up, you should think about it.” I had a lot of of wealthy men calling me, telling me they could —  would run my campaign and raise a billion dollars for me. I think that when you have whose many people whose opinions you value coming at you, it's worthy of thinking about. I've never looked outside for other people to tell me when something — when I should be making a move. And wouldn't I know? Because if God actually want me to run, wouldn't God kind of tell me? And I haven't heard that. I do feel I have a responsibility as a person who has a big voice in this country to use it to promote justice and kindness and good will in the world. But it never has felt to me that that was supposed to be political. And it still does not feel that to me. So I am actually humbled by the fact that people think that I could be a leader of the free world. But it's just not in my spirit. It's not my DNA.

KING: That's what she said. All I'll say is this. We got so much reaction at the magazine —  my other job —  for Democrats, Republicans, black, white that said, “Oprah, you really should think about this.” And I would show her these letters. And say, “Look, this is what people are saying.” Everywhere she goes today, everywhere, people still come up to her and say —  my earring just dropped —  People still come up to her and say, will you at least consider it. When she says it's not in her DNA, I do think that she feels that. I don't believe anybody should be convinced to run for president. I don't. She will say one great speech doesn't mean you should be president of the United States. But I do know Oprah cares about the this country, believes in human connection, and I know she knows how to bring people together as you'll see on the 60 Minutes piece on Sunday.

JOHN DICKERSON: That thing about the DNA thing, when you talk to presidents, they say unless you have that thing when it all goes wrong, it all goes terrible, that thing you can go find nourishment in, you're really in a tough place. She's thinking about the job that you actually have to do it.

O’DONNELL: She can't consider running for president and be on 60 Minutes. She can’t. You just can’t do those two things.

KING: Or she can leave 60 Minutes.

O’DONNELL: Well, right. But also her work with Weight Watchers. There’s a lot of business people who want her to continue her business empire.

KING: There would be a lot of the consider if she decided to do that.

O’DONNELL: Now we know you've been encouraging her to look at it.

O’DONNELL: You can watch Oprah Winfrey’s follow-up round table with voters on Sunday’s 60 Minutes.