CBS This Morning reporter Mark Strassmann on Thursday offered a sneering, condescending look at a new biblical theme park attraction in Kentucky. Speaking of the gigantic Noah’s Ark Experience, Strassmann dismissed, “Nothing like it built before. But critics wonder why it was even built at all.”

Using the liberal reporter dodge of “critics say,” Strassmann attacked the man behind the modern ark, Ken Ham: “What do you say to critics saying this is not the truth? This is not scientifically based. This is promoting an ignorant view.”

A CBSNews.com version of the story also included the charge that the theme park is “ignorant.”

But some critics see the ark as a celebration of ignorance. Others complain employees have to be Christian and sign a "statement of faith" -- and believe the ark's $18 million in state tax incentives trampled the line between church and state. But a federal court allowed it. 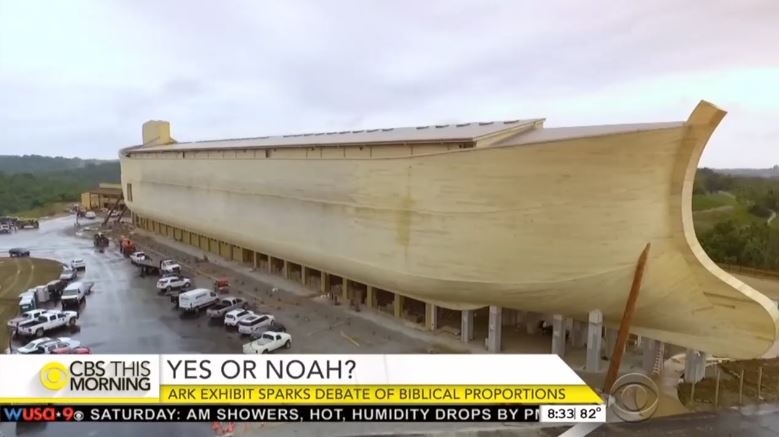 The Noah’s Ark Experience is a 500 foot replica of the biblical vessel. It will include displays, gift shops and entertainment for children.

The journalist featured a man from the Tri-State Free Thinkers to deride: “Noah's Ark is a church. It is clearly a religious point of view that says science is false.  Gay people are icky.” Strassmann concluded his report with this snarky note: “But at today's grand opening, about 150 protesters plan to create a storm of their own.” 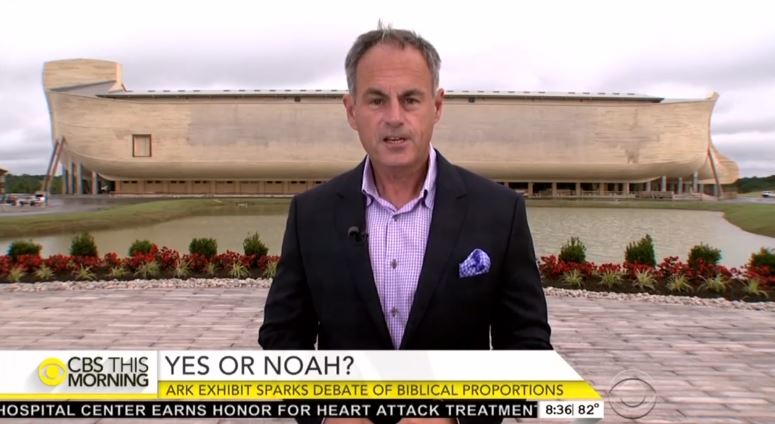 In contrast, the NBC Nightly News on July 1 managed to cover the theme park’s opening in a matter-of-fact report without the seething disapproval. Reporter Kevin Tibbles explained, “The Ark Encounter is of biblical preparations, built using the same measurements as those God gave Noah in the Bible.”

In June, a CNN reporter claimed the ark violated the separation of church and state.

A transcript of the July 7 segment is below:

JAMIE YUCCAS: Noah's ark is standing tall again this morning in western Kentucky. What some call the greatest story ever told is now shared in this massive replica. But after two years of construction, it is both a Christian theme park and lightning rod for critics. Mark Strassmann is at the ark in Williamstown, Kentucky where crowds are pouring in for a glimpse. Mark, good morning,

MARK STRASSMANN: Good morning. If the ark behind me seems larger than life, well, that is the whole idea. Nothing like it built before. But critics wonder why it was even built at all. This is the Ark Encounter, a chapter from Genesis told on a hundred million dollar budget. Four floors of Noah, his family and beasts, great and small. In this rendition, they sail first class through the watery chaos outside and seeing it is a privilege and a pilgrimage to the Demarcus family. What are your first impressions?

WOMAN: This is breathtaking and amazing. The detail, even outside as soon as we walked up, it's just-dropping.

STRASSMANN: This timber-framed ark was built with home from 100 Amish craftsmen following specs straight from the pages of Genesis. It stand seven stories tall and runs 510 feet long. That is almost two football fields. Something to consider: This ark’s Christian backers consider themselves young Earth creationists. That means evolution, junk science. The Earth is only 6,000 years old. Do you believe there were dinosaurs and people at the same time?

RACHEL CROSS (Answers in Genesis supporter): Absolutely. Yep. I absolutely do. I believe they walked hand in hand.

KEN HAM: The truth is the word of God and we are faithfully, as faithfully as we can, representing what God's word teaches.

STRASSMANN: In 2014, Ham debated the truth with Bill Nye, known as the science guy on television.

HAM: I take Genesis as literal history as Jesus did.

STRASSMANN: More than five million people have watched it online.

BILL NYE: You don't want to raise a generation of science students who don't understand how we know our place in the cosmos.

STRASSMANN: On this ark, he sees Christians taking a stand. And what do you say to critics saying this is not the truth? This is not scientifically based. This is promoting an ignorant view.

HAM: People can say all they want and say it's ignorant and they don't believe it and that's fine. I invite them all to come here, everyone.

STRASSMANN: Critics claim of discrimination in hiring. Only Christians. No gays and lesbians and single people have to sign a chastity pledge and yet the project received 18 million dollars in Kentucky tax incentives which a federal court upheld.. Jim Helton of tri-state free thinkers thinks that tramples the line between church and state.

JIM HELTON (Tri-State Free Thinkers): Noah’s Ark is a church. It is clearly a religious point of view that says science is false.  Gay people are icky.

STRASSMANN: True believers may flock to Ham’s ark but he shouldn't expect an olive branch from Bill Nye.

NYE: It would be a hilarious thing for people from other parts of the world to come visit. Are you kidding? Somebody really built this? Wow. Use your head, everybody. Just decide for yourself if you think this is reasonable.

STRASSMANN: Ken Ham hopes to attract two million people to his ark in its first year. But at today’s grand opening, about 150 protesters plan to create a storm of their own.