ABC is really proud of its hoax "exclusive." Tuesday's Nightline and Wednesday's Good Morning America hyped an interview with the man who allegedly perpetrated an elaborate fiction, smearing Pastor Joel Osteen as renouncing his Christian faith. GMA's Elizabeth Vargas touted, "...The hoaxer is explaining why he did it in an exclusive interview with ABC's David Wright." [See video below. MP3 audio here.]

George Stephanopoulos trumpeted, "Revealing overnight, why he went after Joel Osteen. An ABC news exclusive." The odd, sometimes bizarre answers of alleged hoaxer, Justin Tribble, didn't stop the network from airing the story. After David Wright wondered how "we know you're Justin and how do we know this is not a hoax," Tribble weirdly responded, "Well, you don't. No, I'm kidding. You do."

The Nevada man apparently created fake websites, articles and Twitter accounts. Each one falsely asserted that Osteen has rejected his faith and the Bible.

Wright just blandly repeated Tribble's assertion, "As for the maze of phony websites, Facebook and twitter that circulated a bogus story about Osteen, Tribble says he doesn't like the word 'hoax.'"

Wright parroted, "Tribble says he hopes the televangelist will see this as part of God's plan." 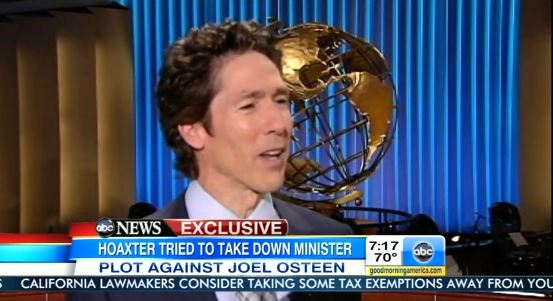 Tribble went to elaborate steps to fool people, including journalists. What is the lesson that ABC is creating here? Create a hoax that dupes reporters and other Americans and you'll end up on Good Morning America and Nightline.

A transcript of the April 10 GMA segment is below:

GEORGE STEPHANOPOULOS: Brand new details on that holy hoax. Meet the man who tried to take down one of America's most famous pastors. Revealing overnight, why he went after Joel Osteen. An ABC news exclusive.

ELIZABETH VARGAS: Now to that elaborate hoax that was targeting televangelist Joel Osteen. A fake website saying the famous pastor had given up the Christian faith went viral. Osteen came out to deny it all and this morning, the hoaxer is explaining why he did it in an exclusive interview with ABC's David Wright.

DAVID WRIGHT: The idea that televangelist Joel Osteen was giving up his ministry made headlines around the world.

JOEL OSTEEN: All is well. I still have my faith. Nothing is changed.

WRIGHT: But the perpetrator of that hoax was a mystery until now. 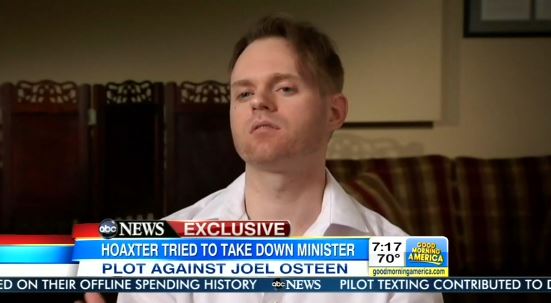 JUSTIN TRIBBLE: My name is Justin Tribble, I'm from the Minneapolis/St. Paul area.

WRIGHT: We were skeptical. So, we asked him to show us his driver license to confirm the name, apparently legit and to corroborate his connection to the story he shared other items, including what he said was the GoDaddy receipt from registering the phony domain name. Assuming you did this, why did you do it?

TRIBBLE: I'm actually a big fan of Joel Osteen, I like him, I listen to him, I enjoy his sermons. I didn't want to hurt the guy. I didn't want to defame him. I want a message to get through to this guy: Tone down the cliches and get real.

WRIGHT: As for the maze of phony websites, Facebook and twitter that circulated a bogus story about Osteen, Tribble says he doesn't like the word "hoax."

TRIBBLE: I would call it sort of a media campaign, a way to get through and a have a dialogue for a man who is essentially inaccessible.

WRIGHT: Tribble says he hopes the televangelist will see this as part of God's plan.

TRIBBLE: I think it would be nice to have a conversation with him. Honestly I wouldn't mind if he prayed over me.

OSTEEN: I'm really not angry. I don't feel like a victim. I feel too blessed that life is too short to let things like this get you down.