The implied threat from the White House to Bob Woodward has thrown the liberal media for a loop. On Wednesday night, Politico published a fawning interview with Woodward. Writers Mike Allen and Jim VandeHei gushed over the "calm, instantly recognizable voice" of the journalist. On Wednesday, the Washington Post, which Woodward famously works for, mocked the Politico piece as nothing different than "fan fiction."

The Politico authors thrilled over being in the same room as Woodward. Allen and VandeHei's first paragraph raved, "Woodward [talked to] us in an hourlong interview yesterday around the Georgetown dining room table where so many generations of Washington’s powerful have spilled their secrets." A simple act of reading an e-mail became: "Digging into one of his famous folders, Woodward said the tirade was followed by a page-long email from the aide." 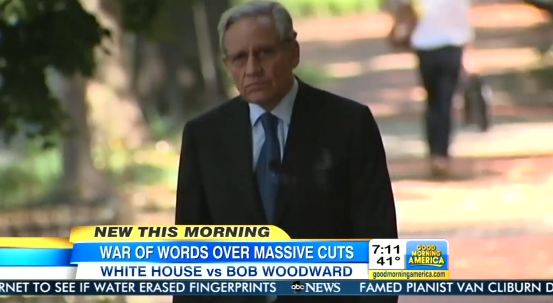 Such flowery descriptions led to mockery from Woodward's own Washington Post. Writer Alexandra Petri responded to this with sharp sarcasm:

This is literally how all my Bob Woodward fan fiction begins, except for the one where he approaches you at a bar and says he’s got a flag he would like to plant in your flowerpot. And I’ve got a pretty sizable folder of it — if not a famous folder, yet."

Regarding some journalists who are defending Woodward in his battle against the White House, Petri offered this assessment of the media:

They have been forced into this position after they hoisted Woodward aloft on their shoulders as The One True Journalist in Washington and started saying that this intimidation had gone on far too long. "It’s not what we read on the page," they say. "It’s how he felt at the time. After all, when Bob Woodward criticizes a White House, we know who generally prevails in this equation."

Politico's interview with Woodward focused around his criticism of Obama's handling of sequestration and subsequent brush back from the White House.

In between praising Woodward, the Politico piece casually offered an admission about Obama and the sequester: "The White House instead has, with great success, fudged the facts."