According to Good Morning America's David Wright on Monday, the upcoming "papal election campaign is getting ugly." The ABC correspondent then declared that Pope Benedict an "absolute monarch."

In a report live from Rome, Wright explained, "Pope Benedict is expected to issue new rules about the timing and procedures of the conclave [the meeting of cardinals to elect a new pope.]" He added, "[Benedict] can do that by degree. The Pope is an absolute monarch." [See video below. MP3 audio here.] Of course, Wright's experience in judging any kind of election is questionable. Back in 2002, he reported from Iraq and insisted, "Seven years ago, when the last referendum took place, Saddam Hussein won 99.96 percent of the vote. Of course, it is impossible to say whether that’s a true measure of the Iraqi people’s feelings."

So, Wright wasn't sure if a brutal, murderous dictator like Saddam Hussein honestly earnled less than 99.96 percent of the vote, yet he labeled the Pope an "absolute monarch?"

On Sunday, Wright filed a very similar report for GMA. He gossiped, "Salacious charges floated in the Italian press that the Pope really resigned because of a huge sex and blackmail scandal about to explode. No sources given. "
If "no sources" were given in the Italian media, why mention it? What kind of journalist chides unreliable, second-hand info and then repeats it? 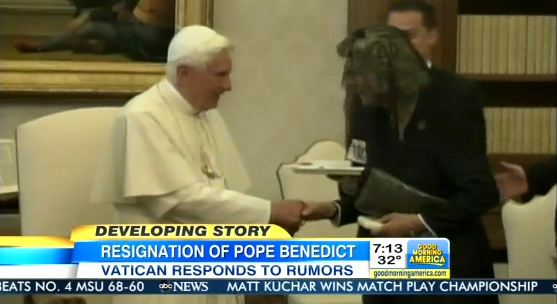 Wright mentioned the resignation of Britain's Senior Cardinal, Keith O'Brien, the "subject of a sex scandal." Though the journalist didn't go into details, he connected the incident as an example "of how the papal election campaign is getting ugly."

A transcript of the February 25 segment, which aired at 7:11am EST, follows:

GEORGE STEPHANOPOULOS: We're going turn now to the Pope. Pope Benedict gave his final blessing Sunday to a crowd of 100,000 in Rome and is now announcing changes to the process of electing a new pope this morning. This is all happening as his final days are shadowed by a new controversy. ABC's David Wright has the latest from Rome. Good morning, David. 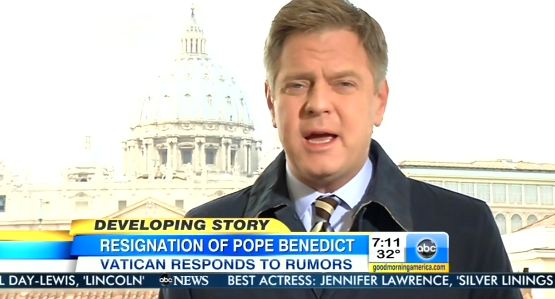 DAVID WRIGHT: Good morning, George. Some breaking news to report this morning. Today, the Pope accepting the resignation of Britain's senior Cardinal, Keith O'Brien, who found himself the subject of a sex scandal. O'Brien indicating he will not be traveling to Rome to participate in the conclave, not wanting to become a distraction. The latest and strongest example of how the papal election campaign is getting ugly. Today, Pope Benedict is expected to issue new rules about the timing and procedures of the conclave. He can do that by degree. The Pope is an absolute monarch. The Vatican is accusing the press corp of being the modern equivalent of the Borgias, bringing political intrigue into what should be a sacred process. These days, the Italian papers read like a Dan Brown novel. Unattributed reports of a dossier prepared for the Pope's eyes only, detailing a sex and blackmail scandal involving the Curia. There is some truth to it. Last year, the Pope formed an investigative commission. These three men, referred to in the Italian press as the 007 cardinals. They were charged with investigating the Vati-leaks affair, where the Pope's butler stole classified documents from the papal apartments and they did give the Pope a report. But only he and they know what's in it.

CARDINAL TIMOTHY DOLAN: You get tons of rumors and all these, all these whispers. Most of them are not true.

WRIGHT: At the same time, there's the very real church sex abuse scandal, casting a shadow over L.A.'s Roger Mahoney and other voting cardinals. The question raised, should morally tainted cardinals be allowed to help choose the new pope. Moments ago, the Vatican announced that the Pope has, indeed, announced the new rules for the conclave. Apparently, the bottom line is the cardinals will not have to wait the 15 days they would have waited before. But the timing of the conclave will be up to them. George?

ROBIN ROBERTS: I know you'll be headed to Rome later this week.