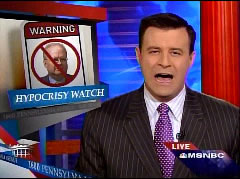 For over two and a half months, MSNBC host David Shuster featured a segment called "Hypocrisy Watch" on his program "1600 Pennsylvania Avenue" that overwhelmingly singled out conservatives and Republicans as hypocrites, while ignoring Democratic offenders. An analysis by the Media Research Center finds that of the 48 "Hypocrisy Watch" segments, 34 went after conservatives or Republicans. Only four (or just under nine percent) attacked liberals or Democrats. (Only two editions could be described as bipartisan. Another wasn't political. The remaining seven segments all hit business and corporate-related targets.)

Amazingly, despite the fact that Republicans are completely out of power in Washington, 20 (or 40 percent) of the "Hypocrisy Watch" designations were given to congressional Republicans, either individually or to the GOP minority in general. The daily feature began on January 14 and Shuster asserted on that day, "...We will focus on an organization or person who clearly seems to be doing something that makes the term appropriate." Liberal hypocrisies, such as President Barack Obama signing a $410 billion spending bill loaded with thousands of earmarks despite decrying them during the campaign, have gone unnoticed. More often, the targets are conservatives such as Louisiana Governor Bobby Jindal, Karl Rove or Congresswoman Michele Bachmann.

Shuster appears to have a particular grudge against Karl Rove, former top advisor to President Bush. Rove has been in "Hypocrisy Watch" five times since its inception. After attacking him on February 13, he mocked Rove on March 6 for spending his "entire career putting politics ahead of everything else." On March 26, he fumed, "Karl, I appreciate that it may be difficult for you to wake up each day, given what you and your Bush administration colleagues did to this country."

Now that the Democrats are holding the reigns of power, has Shuster gone after obvious Democratic hypocrisies, such as Obama signing a $10 billion, earmark-laden spending bill, despite his stated opposition to the practice? No. On March 12, 2009, Commentary Magazine's Peter Wehner wrote on the publication's website that with regard to the spending bill, "1.6 trillion of the 'savings' Obama is claiming are based on the surge in Iraq continuing for 10 more years," even though the President has called for all U.S. troops to be out by August of 2010. Has Obama been labeled a hypocrite for that? No. Instead, on March 9, he complimented Obama for the budget and complained, "The Bush administration refused to include the war costs in the budget." 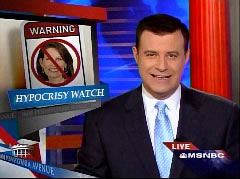 Despite being almost politically irrelevant, Shuster repeatedly attacked congressional Republicans. On March 31, he wondered if Congresswoman Michele Bachmann was "nuts." The House member's crime was describing herself as behind "enemy lines" and saying that her constituents needed to be "armed and dangerous." Rather than acknowledge the obvious, that Bachmann was using symbolic language and referencing the fact that Democrats control the reigns of power, Shuster accused the Representative of advocating "violent," "armed revolutions" in the U.S. He encouraged the Secret Service to investigate. Other targets included Senators David Vitter, John Kyl and Republicans in Congress generically.

Business targets, who could be considered enemies of Obama and his legislation, were featured seven times. Shuster mostly singled out bank executives who were accused of allowing their companies to waste bailout money or provide large bonuses to themselves. In contrast, the only liberal/Democratic hypocrites critiqued by Shuster were Illinois Governor Rod Blagojevich and Barack Obama. He chided Blagojevich on January 23, who was at that time trying to avoid impeachment in Illinois, for not answering enough journalist questions. Attacking Rod Blagojevich, even if he is a Democrat, is not exactly taking a bold stance. The sole, non-impeached liberal that Shuster assailed in "Hypocrisy Watch" was Barack Obama (a total of three times). On January 30, he complained that the President, who had pledged to not have lobbyists in his campaign, did just that. On March 17, he derided the Democrat for not speaking out quickly enough against Wall Street CEO bonuses. On March 30, the host hit the Commander in Chief for lunching with CEOs after calling for the firing of Rick Wagoner, the head of General Motors. 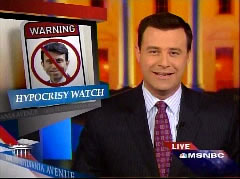 MSNBC's primetime line-up is populated by staunch liberals such as Chris Matthews, Keith Olbermann, Rachel Maddow and now liberal talk radio host Ed Schultz (who took over "1600's" 6pm time slot on April 6.). David Shuster, a supposedly objective news anchor, has adopted the same defensive attitude towards Obama that his evening colleagues showcase. And although "1600 Pennsylvania Avenue" has been cancelled, "Hypocrisy Watch" will continue as Shuster will soon begin anchoring the 3-5pm slot on MSNBC. And no doubt, the segment will likely continue to mostly feature conservative and Republican targets. To paraphrase the close of each and every "Hypocrisy Watch" segment, singling out Republican hypocrites and ignoring similar actions by Democrats is hypocrisy and it's wrong.