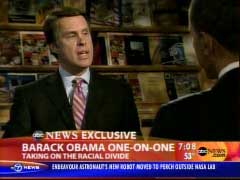 On Wednesday's "Good Morning America," various hosts and reporters could barely restrain their glee and admiration for Senator Barack Obama's Tuesday speech about race and the incendiary comments of his pastor, Reverend Jeremiah Wright. Co-host Robin Roberts hyperbolically claimed that "some" believe "his speech was not only important for his campaign but also for the future of the country." In a tease for the program, she put the onus on America and asserted, "Barack Obama challenges voters and the country..."

Fellow co-host Chris Cuomo set up an "exclusive" interview with the presidential candidate by labeling the speech "historic." "Nightline" co-host Terry Moran, who talked to Obama, prefaced his segment by bubbling, "Well, as you know, one of the hardest things to do in American politics, in American society, is to talk honestly about race. And it's clear that's what Barack Obama was trying to do in that remarkable speech."

Moran did ask one tough question. He bluntly queried Obama, "If I went to a church where white supremacy was preached, what would you think of me?" But when the senator dodged the question, he didn't follow-up. More representative of Moran's tone was when he tossed a softball about the type of advice Obama's wife gives him. He closed the segment by oddly claiming that the controversy comes down to black patriotism: "For some, perhaps for many white voters, the controversy that's erupted around Barack Obama's candidacy might be boiled down to a stark question: Do you consider yourself a black man or an American first?" Now, maybe Moran meant that it doesn't seem like Reverend Wright like America much, but it was a poorly phrased question. (It should be noted that the MRC's Brent Baker blogged about a portion of the Moran interview, which first aired on Tuesday's "Nightline.)

In a follow-up piece, "This Week" host George Stephanopoulos similarly rhapsodized over Obama's "sophisticated, eloquent" speech. Now, he did question how effective it would ultimately be, but later said that the fact that Obama won't renounce Wright personally is a plus: "And I think the other intangible here is how voters will respond, not only to the honesty that Barack Obama showed yesterday, not only the sophistication he showed in the speech, but also the honor that he showed." According to Stephanopoulos, even Americans who don't like Wright will respect Obama for sticking by him.

There's another way to demonstrate just how taken "Good Morning America" was with the speech. In an age where quick cuts and short attention spans rule, GMA played, uninterrupted, a one minute and 18 second long clip of the address, a favor not often granted to many political speeches.

A transcript of the two segments, which aired at 7:04am on March 19, follow:

ROBIN ROBERTS: Black and white. Barack Obama challenges voters and the country, talking frankly about race. We have an exclusive interview with the senator this morning.

ROBERTS: And now to the race for '08 and one of the biggest tests of this campaign. In a speech on Tuesday, Barack Obama condemned the words of his former preacher and called for a nationwide conversation on race in America. Now, some say his speech was not only important for his campaign but also for the future of the country.

SENATOR BARACK OBAMA (time: 1 min 18 seconds): The fact that so many people are surprised to hear the anger in some of Reverend Wright's sermons simply reminds us of the old truism that the most segregated hour of American life occurs on Sunday morning, that anger is not always productive but the anger is real. It is powerful. And to simply wish it away, to condemn it without understanding its roots only serves to widen the chasm of misunderstanding that exists between the races. We can dismiss Reverend Wright as a crank or a demagogue, but race is an issue that I believe this nation cannot afford to ignore right now. I can no more disown him than I can disown my white grandmother, a woman who helped raise me but a woman who once also confessed her fear of black men who passed her on the street and who on more than one occasion has uttered racial or ethnic stereotypes that made me cringe. This is where we are right now. It's a racial stalemate we've been stuck in for years. And if we walk away now, if we simply retreat into our respective corners we will never be able to come together and solve challenges like healthcare or education or the need to find good jobs for every American.

ROBERTS: So many people watching that yesterday.

CHRIS CUOMO: Oh, absolutely. People are talking about it. And the opinions, you know, they're going to vary. But, the question is, what's being called an historic speech-- Now, the question is, what does the Senator himself hope can come from this? Terry Moran, anchor of ABC News "Nightline" sat down with the Illinois senator in an exclusive interview to talk about what motivated the speech and what this could mean to his campaign and the country. Terry joins us from the nation's capital this morning. Good morning, Terry.

TERRY MORAN: Good morning, Chris. Well, as you know, one of the hardest things to do in American politics, in American society, is to talk honestly about race. And it's clear that's what Barack Obama was trying to do in that remarkable speech. And when we sat down with him just afterwards, he reflected on what he was trying to do here and why he felt he had to give this speech now. Things are changing in this campaign. Race is emerging as an issue in the Mississippi primary. You won 92 percent of the black vote and just 26 percent of the white vote.

MORAN: Given what's happening, do you feel this is a make or break moment for your candidacy?

OBAMA: You know, I don't think it's a make or break moment, I mean, we, if you just look at mathematics and the popular vote of the campaign. We're in a good place.

MORAN: As for the Reverend Wright --

OBAMA: My point, I think was that you don't disown, certainly the church, but you don't even disown a man, simply because he says something that you profoundly and deeply disagree with.

MORAN: Well, let me press you on that. If I went to a church where white supremacy was preached, what would you think of me?

OBAMA: Well-- But, see, I disagree with you though, Terry. That's not what is preached at Trinity. And that, I think-- That is an easy equivalence that is not what at all is taking place. If you look at the sermons, even the most offensive ones that are at issue, he is condemning white racism, as he defines it. But he is not condemning the white race. He is not suggesting that blacks are superior.

MORAN: And Obama is quick to point out the complexity of his own heritage and how it shapes his politics.

OBAMA: One strength I do have, is that I have a foot in each camp. Right? Since I'm half white, and was raised by a white mom and white grandparents. You know, I have a little more insight into, into those white resentments. You know, you think of the experience of whites in a place like Boston or Scranton, Pennsylvania, you know, where -- at time of economic stress and difficulty, suddenly, blacks are moving in, kids are being bused. You know, there's some sense that, you know, the economic competition is being tilted unfairly because of affirmative action.

MORAN: Another major force in his life, his wife, Michelle.

OBAMA: I am married to a black American who carries within here the blood of slaves and slave owners.

MORAN: You mentioned your wife Michelle's heritage in this speech. What kind of advice has she given you on these matters?

OBAMA: You know, Michelle, and most of my black friends, I think, were much more confident and calm about me giving this speech. My white friends and advisers were much more nervous.

MORAN: For some, perhaps for many white voters, the controversy that's erupted around Barack Obama's candidacy might be boiled down to a stark question: Do you consider yourself a black man or an American first?

MORAN: Is there a difference between black patriotism and white patriotism?

MORAN: A final note, Obama's basic message is that all of the dishonesty about race, the anger and resentment leads to spectacular dead ends, like he pointed out, the O.J. Simpson trial. And he went out of his way to say he thought O.J. was guilty.

ROBIN ROBERTS: And now for the bottom line, we turn to ABC chief Washington correspondent and host of "This Week," George Stephanopoulos. And going back to the speech for a moment there, George-- Excuse me, good morning to you, George. Nice to see you.

STEPHANOPOULOS: Well, I think it stopped the short-term bleeding. As a speech, it was, I think, a stunning success. As a speech, it was sophisticated, eloquent. Barack Obama is as fine a writer as you'll find in a politician. The question is, how was it received by some key audiences? I think it reassured Barack Obama's liberal supporters. I think it was a harder sell to win over white working class voters in these primaries who have been pretty resistant to Barack Obama all through this process. And the comments of Reverend Wright will make that even more difficult. A single speech isn't going to solve that. The final key group are these undecided super delegates who holds the balance of power in this primary fight. My gut tells me that it probably helped Barack Obama with this group. But, they are going to wait and see how voters respond in polls and these upcoming primaries before they make a final decision.

ROBERTS: And speaking of polls, there that was a poll taken yesterday. And 65 percent of all voters, Democrat, independent, Republican, 65 percent of them said Reverend Wright's comments made no difference in the way they view Obama. Again, this was taken yesterday. This is unchartered territory for a presidential candidate to, to weigh into this really frank discussion about race.

STEPHANOPOULOS: No question about it, Robin. And that's why Barack Obama knew all along that he would have to give this speech at some point in the campaign. Those polls, those early polls are also tough to gauge, because they can't measure how this will play out over the course of a campaign. And I think the other intangible here is how voters will respond, not only to the honesty that Barack Obama showed yesterday, not only the sophistication he showed in the speech, but also the honor that he showed. He did not renounce someone that he was under a great pressure to renounce, even though he disagreed with his comments. And I think a lot of voters, even if they're uncomfortable with Reverend Wright, will respect Barack Obama for that act.