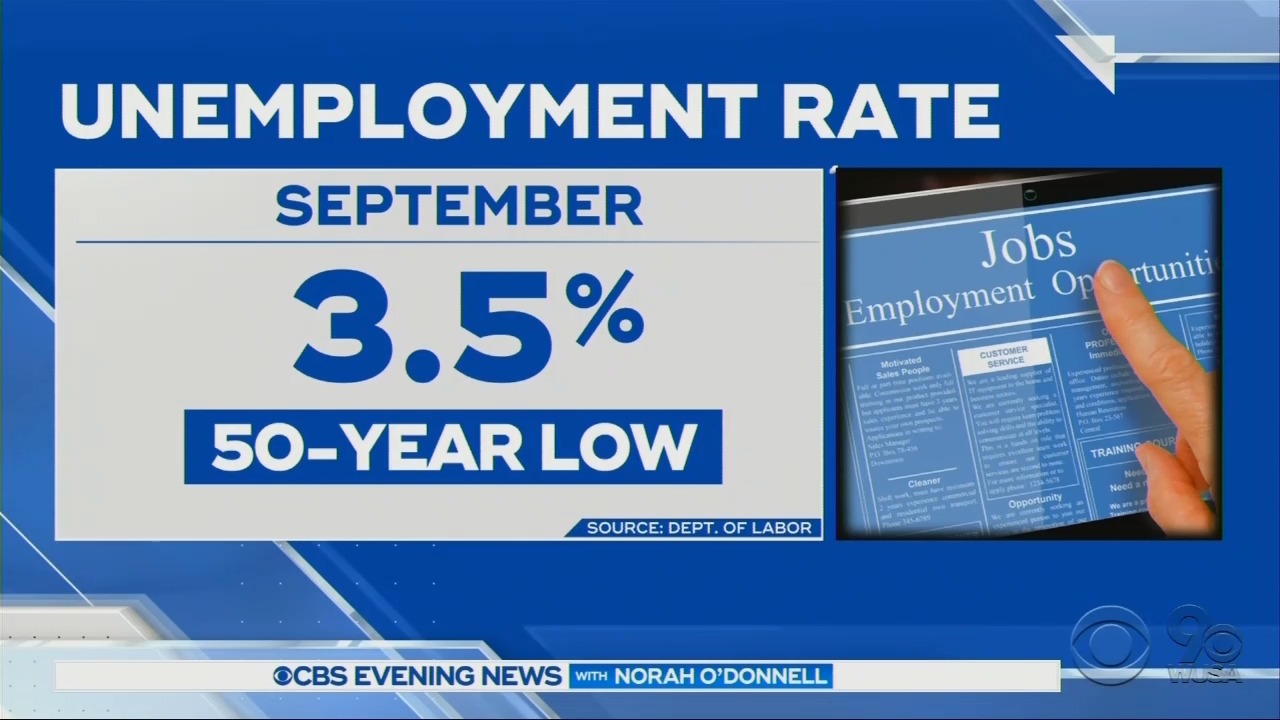 Friday morning featured the latest jobs report, showing that the unemployment rate dropped to 3.5 percent, which is the lowest level since 1969. Of course, amidst their full-court press for impeachment, the Friday evening broadcast networks either buried it or ignored it completely.

Worst of all, NBC Nightly News did not bring up the jobs report at all while ABC’s World News Tonight and the CBS Evening News spent a combined 32 seconds on the economy.

Today’s jobs report showed hiring slowed just a bit last month. The U.S. economy added 136,000 jobs in September. That was enough to lower the unemployment rate two-tenths of a point to 3.5 percent and that is a 50-year low.

ABC’s World News Tonight devoted the most time to talking about the economy of the three broadcasts: 18 seconds.  Fill-in anchor and weekend host Tom Llamas reported:

And news tonight about the American economy. The U.S. Adding 136,000 jobs since September; unemployment falling to 3.5 percent, the lowest in 50 years. The report, of course, helping boost the stock market. The Dow gaining 372 points today, closing at 26,573.

Instead of covering the historically low unemployment, NBC Nightly News viewers were subjected to more hyperbolic commentary from Meet the Press host Chuck Todd; just one night after he declared that “a national nightmare is upon us.”

Brought on for analysis at the end of their impeachment coverage, the self-righteous NBC News political director picked up where he left off; accusing President Trump of “testing the limits of the Constitution” and violating “his oath to the Constitution.”

Showing that he’s hellbent on impeachment, Todd cloaked himself in the Founders and warned Republicans in the event they don't support impeachment (click “expand”):

[W]hat he has admitted to in the last 48 hours is essentially violations of his oath to the Constitution that the founders were always petrified of. They were petrified of foreign interference so the point is this. This is a moment of truth for the Republican Party in particular because condoning the behavior that the President has done publicly by asking for foreign influence and by admitting that yes, he is doing this, if it is the way we suddenly do politics in this country and it’s condoned, we are going to go down a rabbit hole and we’re going to go down a…a slippery slope that is going to question our institutions. It’s basically going to question the legitimacy of our democracy in ways that I don’t think we’ve quite fathomed. The point is I do think that every elected official in that Congress has to be thinking about that going forward.

Todd often becomes incensed at the mere mention of liberal media bias, screeching that it’s a farce, but ride-after-ride on a high horse deeming one side of the aisle to be what ills our body politic fits the definition plus how the liberal media have squandered their position as a trusted institution.

Correspondent Peter Alexander brought up the text messages involving American diplomat Gordon Sondland, U.S. diplomat Bill Taylor, and former enjoy Kurt Volker that the liberal media have become obsessed with as the latest example of a smoking gun to impeach the President.

To their credit, they were the only broadcast network to mention that Volker asserted in his opening statement during his closed-door congressional testimony that he didn’t see the dispute over aid to Ukraine as a quid pro quo.

However, for the second night in a row, the newscast made no mention of the fact that the now-infamous “whistle blower” was a registered Democrat. Talk about a double standard.

In totality, NBC Nightly News devoted more than seven minutes to discussing “Ukraine-Gate,” but again, they had no time to discuss the economy; which reflects positively on the President. After all, that might contradict the narrative of a “national nightmare.”

Help us fight back against the media’s impeachment crusade.

A transcript of the relevant portion of Friday’s NBC Nightly News is below. Click “expand” to read more.

LESTER HOLT: Good evening. The impeachment inquiry against President Trump is focusing tonight on newly obtained text messages suggesting political strings may have indeed been attached to the President’s call with Ukraine and revealing an American effort to nudge Ukraine into investigating Trump rival Joe Biden. But today, shifting his line of defense, President Trump now says he doesn’t care about politics. Our Peter Alexander has late new information.

PETER ALEXANDER: President Trump tonight digging in on his public call for Ukraine and China to investigate Joe Biden.

ALEXANDER: The President’s new comments follow the release of explosive text messages between several Trump-appointed diplomats who dangled a possible White House meeting with President Zelensky of Ukraine; if he agreed to investigate Biden and the origins of the Mueller inquiry. July 19th, a week before the President’s call with Zelensky, Kurt Volker, the US Envoy to Ukraine texted another American diplomat, Gordon Sondland: “Had breakfast with (the President’s personal lawyer), Rudy (Giuliani), this morning, most important is for Zelensky to say he will help investigation.” Then July 25th, the day of the call, Volker texted a Zelensky aide, writing “Heard from the White House -- assuming President Z convinces trump he will investigate/ ‘get to the bottom of what happened’ in 2016, we will nail down date for visit to Washington.” Later, the group coordinating with a Ukrainian aide on how to announce the investigation. Zelensky never did make the statement but at the time his aides’ messages suggest they did not know the White House was delaying military assistance. On September 9th, Bill Taylor, the top US diplomat to Ukraine, texts, “I think it’s crazy to withhold security assistance for help with a political campaign.” Sondland responds, “I believe you are incorrect about President Trump’s intentions. The President has been crystal clear no quid pro quo’s of any kind,” adding “I suggest we stop the back and forth by text.” It’s that text message from Sondland, a Trump donor, that the President’s touting today.

PRESIDENT TRUMP: He was 100 percent for what we’re saying. 100 percent and if you look, he also said there was no quid pro quo. That’s the whole ball game.

ALEXANDER: On Thursday, Volker testifying to Congress behind closed doors said “at no time was I aware of, or took part in, an effort to urge Ukraine to investigate former Vice President Biden” but Democrats are seizing on the new texts.

ALEXANDER: A key Republican, Senator Ron Johnson, also raising concerns; telling The Wall Street Journal that the diplomat, Gordon Sondland, told him military aid to Ukraine was contingent on launching an investigation but that in an August phone call, Johnson says President Trump told him “No way, I would never do that. Who told you that?” Meanwhile, President Trump today escalating his showdown with House Democrats; saying he’s sending a letter to Speaker Nancy Pelosi demanding the full House must vote on the impeachment inquiry before the White House will turn over any requested documents.

JOE BIDEN: All this talk of the President about corruption comes from the most corrupt President we’ve had in modern history. He’s the definition of corruption. He’s indicted himself by his own statements.

HOLT: And Peter, we now understand House Democrats are moving to subpoena the White House.

ALEXANDER: Yeah, Lester, you’re exactly right. That happened late tonight. Democrats issuing that subpoena to the White House Chief of Staff; demanding documents they say could shed light on pressure from the President against Ukraine. They have also requested documents from the Vice President, Mike Pence. Pence’s spokesperson blasting the move tonight; saying it does not appear to be a serious request, and that it is just part of what they call a “partisan” impeachment. Lester.

HOLT: Peter Alexander, thanks. And in Ukraine, authorities there are now taking another look at that company tied to Joe Biden’s son Hunter Biden. Chief Foreign Correspondent Richard Engel is in Kiev tonight.

RICHARD ENGEL: Today, Ukraine’s Prosecutor General announced he’s reviewing old corruption cases; including ones against the owner of a company that gave Hunter Biden a paid job on its board. “We are looking at closed cases where decisions may have been made illegally,” he said. It comes after President Trump urged Ukraine’s President in that July phone call to investigate allegations raised by President Trump and his allies that while serving as Vice President, Joe Biden pressured Ukraine to help his son. There’s no evidence he did. We recently asked the former Prosecutor General who oversaw the investigation into the energy company that hired Hunter Biden. Did you find any corruption by then-Vice President Biden or Joe Biden’s son Hunter?

YURI LUTSENKO: I can declare that I don’t know any possible violation of Ukrainian law. Once again, Ukrainian law by Biden and Biden Jr.

ENGEL: The current top prosecutor told us tonight his review is part of ongoing judicial reforms here and that he was not pressured by President Trump, Ukraine’s President or anyone else. Lester?

HOLT: Richard Engel, thanks. Let’s bring in Chuck Todd. Chuck, it’s as if we’re looking at this through two separate universes these days. Where are we as a country after what we’ve learned; just the last 48 hours?

CHUCK TODD: Well, look, I think we’re at a crossroads as a country. I mean, look, we’re extraordinarily polarized and divided. That we’ve known, frankly, for almost a decade but what the President is now pressuring essentially us and as a country, testing the limits of the Constitution; what he has admitted to in the last 48 hours is essentially violations of his oath to the Constitution that the founders were always petrified of. They were petrified of foreign interference so the point is this. This is a moment of truth for the Republican Party in particular because condoning the behavior that the President has done publicly by asking for foreign influence and by admitting that yes, he is doing this, if it is the way we suddenly do politics in this country and it’s condoned, we are going to go down a rabbit hole and we’re going to go down a…a slippery slope that is going to question our institutions. It’s basically going to question the legitimacy of our democracy in ways that I don’t think we’ve quite fathomed. The point is I do think that every elected official in that Congress has to be thinking about that going forward.