The Pope is at it again, this time issuing an apology to the LGBT community over the Catholic Church’s messaging on the nature of homosexuality and other LGBT related issues. During the segment discussing the Pope’s statement on CBS This Morning, co-hosts Gayle King, Norah O’Donnell, and Charlie Rose fawned and praised the Pontiff’s bending to the liberal tradition of raising up Christian figures who embrace the LGBT community, while attacking Christians who refuse to allow secular worldviews to bend their faith.

GAYLE KING: All right, Seth Doane. He certainly goes places where other people don't. I like what we just heard that tone is very important.

CHARLIE ROSE: But equally important what he said about genocide, and Armenian. A longstanding battle for them and long resistance by the Turks.

GAYLE KING: He doesn't seem afraid to go in and speak what he is thinking.

It’s a funny change of pace from how the media often portrays Christians. While stating the Pope “goes where other people don’t like” as a positive thing, typically when regular Christians go against the grain of progressive bias by sticking to their faith, going where “people don’t like” is often seen as the ultimate sin in the eyes of the liberal media.

The liberal media double standard the past year has been more evident, whether it was negatively attacking Christian bakers refusing to bake cakes for homosexual weddings, or even discussing how the LGBT community blamed Christians for the Orlando shooting caused by a homosexual, muslim psycopath. It seems its perfectly ok to be religous according to the progressive agenda, as long as that religion isn't Christian- and even if it is- you just don't practice your beliefs or even stand by them.

The full transcript from the segment is available below.

NORAH O’DONNELL: Pope Francis is speaking out again in support of gay people. The pope says the Catholic Church owes an apology to gay individuals and others mistreated. Refer to Christians, quote, we are sinners. Francis spoke after a visit to Armenia where he angered Turkey's government by describing the mass killing of Armenians a century ago as genocide. Seth Doane is in Rome just outside Vatican City with reaction to the Pope’s newest comments. Seth good morning

SETH DOANE: Good morning this is the strongest support of the gay community we have heard from this Pope so far. The first we have heard him speak publicly on the issue since that shooting in Orlando. Pope Francis made the apology on poured his papal flight saying the gay community should quote, “not be discriminated against and should be respected and pastorally accompanied.” These wide ranging press conference on board his flight have become a signature of Pope Francis. In his comments Sunday, he referenced his now famous remark “who am I to judge?” Referring to gays which he made during another in-flight press conference in 2013.

ROBERT DODARO: I think this is significant.

ROBERT DODARO: This is standard Catholic doctrine a long time to determine between persons and act. But what the Pope is saying, no, we have to do more than that. We have to actually apologize. As Catholic Christians, we have to apologize to groups of people, homosexuals being one of them, whom our language and behavior has hurt.

SETH DOANE: Following the mass shooting at that gay nightclub in Orlando, the Vatican had released a written statement about the dreadfully high number of innocent victims which has caused the deepest feelings of horror and condemnation. But the Holy See was criticized for not specifically noting that many of the Orlando victims were gay. While the pope's comments have set a different tone, the church has not changed its official stance on gay issues, teaching homosexual acts are sinful. Back in April, a report on the family titled the joy of love, wrote they are absolutely no grounds for considering homosexual unions. The Pope often gets credit for being a reformer but church doctrine doesn't change here.

ROBERT DODARO: No, it doesn't change but what changes is tone. And tone is very important. It may be as important as doctrine.

SETH DOANE: So then is this all public relations?

ROBERT DODARO: If I were only public relations, though, would that be such a bad place to start?

SETH DOANE: The Pope also extended an apology to the poor, to exploited women and also, Gayle, to child laborers. 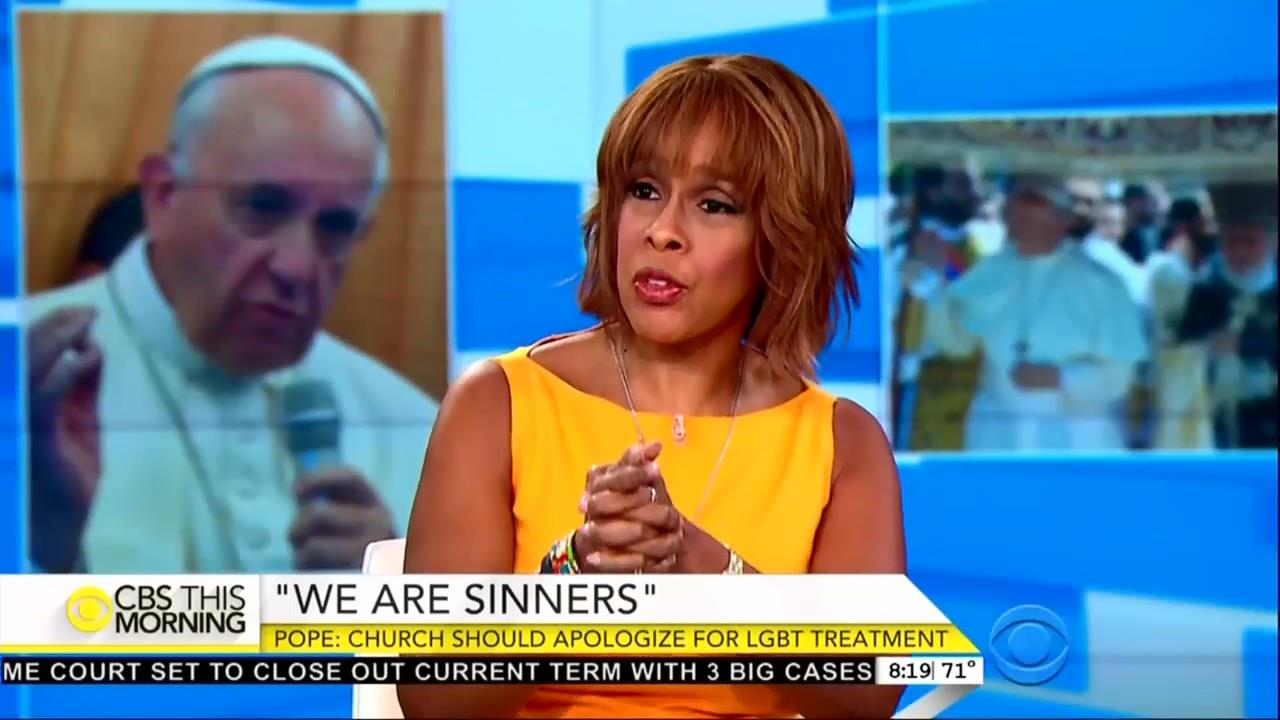 GAYLE KING: All right, Seth Doane. He certainly goes places where other people don't. I like what we just heard that tone is very important.

CHARLIE ROSE: But equally important what he said about genocide, and Armenian. A longstanding battle for them and long resistance by the Turks.

GAYLE KING: He doesn't seem afraid to go in and speak what he is thinking.