In yet another example of the massive double standard between the way the “mainstream media” treats liberals and conservatives, Politico media reporter Michael Calderone greeted the resignation of disgraced Democrat congresswoman Katie Hill as an "epic dilemma" for the media. This was the headline:

"Publishing [intimate] photos ... doesn’t make you a journalist. It makes you a Peeping Tom.”

Calderone asserted that “Katie Hill may be the first millennial member of Congress whose career was upended after the publication of intimate and embarrassing photos, but she’s not likely to be the last.” He quoted the liberal lecture from Chris Hayes, the host of the All In weeknight program on MSNBC:

There is an entire generation of Americans who have been taking selfies and images of themselves in various contexts, whether at parties or in intimate relationships with consenting adults.

There’s going to be a generation of members of Congress and politicians where there are thousands of images just [laying] around.

The Politico reporter noted that Ashley Fairbanks, a 32-year-old who works on Julián Castro’s presidential campaign, tweeted: “Almost every woman I know has taken nudes at sometime in her life. As more women under 40 run for office, we are going to have to figure out how to stand together and say it’s the leaking of them, not the taking of them, that is shameful.”

All of this ignores that Hill didn't resign because some people saw nude pictures. She resigned because she was engaging in an affair (or a "throuple") with a staff member on her campaign, and was accused of sexual behavior with current congressional staff. That's why she was referred to the House Ethics Committee. Calderone avoided all those ethical issues, just as other liberal media outlets have tried to turn Hill into a victim instead of a perpetrator.

This amounted to a lecture about how "everyone" has nude pictures on their cellphones, and the media need higher standards:

News executives and editors have long faced tough decisions when it comes to weighing privacy concerns against the need to reveal information in the public’s interest. That challenge is amplified by the ubiquity of cellphone images and the potential for former romantic partners and ex-friends — or anyone with a political ax to grind — to distribute them in an attempt to humiliate or discredit. 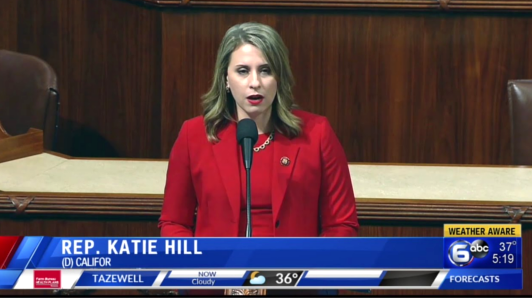 Calderone noted most media outlets didn't share any nude photos, singling out RedState.com and the Daily Mail. He used liberal media ethicists to slam what happened to Hill. The most colorful came from the Los Angeles Times editorial writer Jon Healy, who decried the oncoming "fear of the congressional selfie apocalypse."

But it was strange that Calderone would to Ben Smith of BuzzFeed for ethics advice, considering Smith published the entire gossip-loaded Steele dossier, complete with descriptions of Trump allegedly hiring prostitutes in Russia to urinate on a bed the Obamas had slept in. He also quoted Noah Shachtman, editor of the liberal Daily Beast, which Google shows has a healthy interest in the "pee tapes."

“Privacy is one place where journalists need to be really thoughtful about how societal norms are changing, and the norms are becoming more restrictive than the law,” Smith said, insisting that “everyone has embarrassing stuff on their phones.”

Calderone ended with Shachtman, who “likened the current challenge to newsrooms grappling in recent years with the distribution of hacked materials and deciding what meets the bar for publication.”

“Just because a photo is embarrassing doesn’t mean it’s newsworthy,” Shachtman said. However, “if the photo points out something newsworthy -- a breach of power, some kind of criminal activity, some kind of hypocrisy -- then I think [it’s] fair game.”

“It’s a grow-the-f--k-up moment,” offered Shachtman. “Everybody’s got some embarrassing photos in their past. Publishing photos that are merely embarrassing, and not newsworthy, doesn’t make you a journalist. It makes you a Peeping Tom.”

Hill didn't apparently meet the bar for "a breach of power" or "some kind of hypocrisy," even as she raged against sexual harassment by powerful men, even in her final speech in the House chamber.