Cramer: 'This is the Greatest Wealth Destruction by a President' 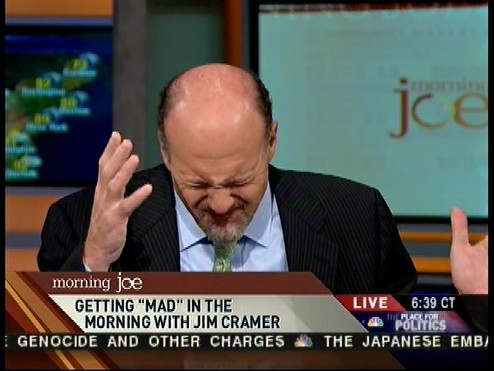 On Tuesday's "Today" show, the outspoken "Mad Money" host said: we have "an agenda in this country now that I would regard as being a radical agenda";  Obama's just announced budget "put a level of fear in this country that I have not seen ever in my life," and; "This is the most, greatest wealth destruction I've seen by a president."

He also called Timothy Geithner "an invisible treasury secretary," and expressed hope that the next time he goes to Capitol Hill "he doesn't throw the drowning man the anvil like he did the last time he spoke" (video and transcript below the fold, file photo):

MATT LAUER, HOST: It took only 14 trading sessions for the Dow to fall from 8,000 to less than 7,000 and a third of people polled recently say they feel this market will go below 6,000 in the not-too-distant future. Let me bring in Jim Cramer and Erin Burnett of CNBC and let's find out more. Where are we, Jim?

JAMES CRAMER, CNBC: We are going lower. I think we could bounce periodically, but this is a bad market, and I don't think people should be counting on it for anything positive.

LAUER: Erin, somebody here on Monday said the way this market dropped on Monday was so controlled, it was scary. What do they mean by that?

ERIN BURNETT, CNBC: I guess it's sort of like a serial killer, right? Everything is so planned out and it's horrible, but I mean, we've passed the point of panic where you see the sudden down drafts and now there is just sort of this overall malaise that has settled over frankly the entire country, which makes it broader than just the market. I mean the market just keeps going down. But people just have this sense of negativism and we're resigned to think of things being bad, and that's why you see it.

LAUER: It seems that people, investors are waiting for some sign from banks in particular that they've either stabilized or begun to turn things around. Now obviously, yesterday we had the AIG news, which was bad news. So, how far away, Jim, can you even look in a crystal ball, either of you, and see a point where banks can give us some of that news?

CRAMER: Well, I don't think we're going to get that. We still have an invisible treasury secretary. We haven't seen him since I spoke with you last.

LAUER: He's going to testify on the Hill this morning about the budget.

CRAMER: That will be pleasant to see him. I hope he doesn't throw the drowning man the anvil like he did the last time he spoke. But I see no reason to own any bank stocks. I don't believe those are repositories of anything other than fear.

LAUER: You think there is good news.

BURNETT: Look, there is a lot of bad news, and I think the first thing we have been saying to people for months is accept reality. There is going to be a change in living standards, going to be a change for this country. And people seemed in denial. They've accepted that now. That's why you see the market keep going down. That's why you see the negativism. But at some point, the country will start to improve. There are three quick things to tell you positively. Wal-Mart's one of them, Matt. Wal-Mart is doing better than expected. Shipments for footwear and apparel were up in January from China to the United States. People are still buying basics. You're seeing some of that. Okay, that's not things are great --

LAUER: Is she grasping?

CRAMER: As much as I like Wal-Mart, it's where you shop when you're having a tough time. Look, if I saw Saks flying or Neiman Marcus or Tiffany, I'd give you a little jingle.

LAUER: Famously in October, Jim, I don't mean to interrupt, but famously in October, you told people if you need this money in the next five years, get it out of the market. And then in November on the 24th, you said this to me on our show, you said "Matt, but confidence, confidence can be restored. A lot of what's going on is gloom. Some of this is pessimism that's unwarranted. Fast action by Obama could take that off the table." We had a stimulus package, we had a housing bailout, we've got efforts to save the banks. People would say that's fast action. Why hasn't it worked?

LAUER: So, the policies are not shareholder-friendly?

CRAMER: Shareholder-friendly? This is the most, greatest wealth destruction I've seen by a president.

BURNETT: The country's friendly. I mean, there is a way to put it together, and I've got to say --

CRAMER: The stock market is the country right now. This is where people's weath is. This is their pension plans, their 401(k)s, their IRAs.

BURNETT: It is part of the country. I mean, half of Americans do own stocks. You can't deny the crucialness of the market. I think you're right about that. But there is also the key which is psychology, and that can be turned around and that needs to start. People need to start speaking more positively to turn it around.

CRAMER: (crosstalk) You have to give me something more positive --

LAUER: A lot of people are saying we're moving past a recession, we're going into a depression. But it doesn't have to be the great depression that we've all read about and talked about. It could be a mild depression. What would that look like?

CRAMER: I call it a garden variety depression, to distinguish from the 30% unemployment we had in 1932. We're not going to get that. We have FDIC, we have an insurance policy called Social Security. It won't come to that. It won't come to civil unrest, but we do have to change the attitude of the president to go from what I regard as being a radical agenda to something that's slower and recognizing that times are bad.

LAUER: I'll give you the last word, Erin.

BURNETT: I'll just say this: I just came back from Asia and that's a place where people talk about, hey, I made more money than my parents made, and that's the way this country used to feel, and we can go back to that again, where people have a broader optimism about where the country is going, and I think that's what we're suffering from. We can get that back. Matt, the rest of the world still looks to America as a leadership of entrepreneurialism and in terms of wealth, they do. And that should make us feel better.

LAUER: Erin Burnett and Jim Cramer, guys, thanks very much.

You've got to wonder if Cramer is going to continue to be used on NBC if he keeps talking this way.