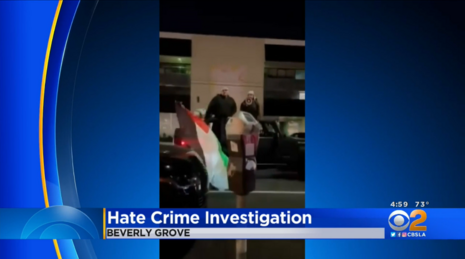 Over the course of the week, there were numerous stories about “pro-Palestinian” (essentially pro-Hamas) mobs gathering around the country to “protest” the ongoing conflict in Israel devolving into wild hunts for Jewish Americans. And despite the fact these heinous acts were incited by the Hamas sympathizers in “The Squad,” none of the attacks were given airtime on ABC, CBS, and NBC’s morning and evening newscasts.

Instead, they were all ticked off that Israeli Prime Minister Benjamin Netanyahu was defying President Biden’s calls for a cease-fire against genocidal terrorists.

“Despite President Biden's call to deescalate today, Israeli Prime Minister Benjamin Netanyahu vowed the operation will continue, tweeting, ‘Until its goal is achieved, to restore peace and security to you, the citizens of Israel,’” whined foreign correspondent Imtiaz Tyab on CBS Evening News.

But what the networks didn’t want their viewers to know about, was how roving mobs of Palestinian extremists were on the prowl for Jews to attack.

On Wednesday, videos surfaced on Twitter of a convoy of people driving through the Los Angeles neighborhood of Beverly Grove (an apparently prominent Jewish area) the previous night. The group was harassing people on the sidewalk and allegedly shouting “F*** the Jews.”

Reportedly the drivers were yelling "F**k the Jews."

You can see the pro-Palestinian group attacking two people on the sidewalk In this video, and one of them fights back.

A victim is hospitalized.

According to reports, the mob was also going around and asking people if they were Jewish. And at one point, a brawl broke out as the group barbarically attacked an Iranian-American Jewish man that was having dinner at a sushi restaurant. All of it was caught on camera and from multiple angles.

The out-of-control Palestinians were also caught on camera trying to run over a Hasidic Jewish man. The security camera footage shows the man as he ran for his life through a parking lot as a black SUV loaded with extremists tried to run him down.

“Witnesses said a mob of pro-Palestinians attacked a group of Jewish men who were dining at the restaurant. Cell phone video showed a group of men get out of the car and start to attack them while yelling anti-Semitic slurs,” reported the local CBS affiliate, CBSLA. “The man said he was physically attacked when he tried to defend the group. He said the men used anti-Jewish profanity.”

The affiliate also noted that the incident was being investigated as a possible hate crime (no kidding).

On Twitter, Arizona Democratic State Representative Alma Hernandez, who’s Jewish and a Zionist, spoke out against the attack. “Attacking #Jews on the street for no damn reason other than they are #Jews is NOT #SocialJustice it is NOT #propalestine it IS #Antisemitism and deplorable. You can’t use what is going on to hurt others period. The law must hold them accountable,” she exclaimed.

Later in the day, she shared terrible news that her synagogue had been attacked. “I'm a complete mess in tears as I write this,” she wrote. “I just got off the phone with my Rabbi our synagogue was vandalized [and] someone through a rock at our glass door. This was NOT and [sic] accident!”

I'm a complete mess in tears as I write this. I just got off the phone with my Rabbi our synagogue was vandalized someone through a rock at our glass door. This was NOT and accident! I feel numb. This is in #tucson Send prayers our way. It's just the beginning 😪 #Antisemitism pic.twitter.com/YFZCL3tgFM

The networks divulged none of this to their viewers. They also refused to do the impressive leg work that Sara Carter’s The Dark Wire did in exposing the antisemitism of the pro-Palestinian protests around the globe. “In Seattle, pro-Palestinian protestors also shouted “long live the Intifada” as they stole an Israeli flag from pro-Israel protestors and set it ablaze,” reported the esteemed Jennie Taer.

This willful omission of pro-Palestinian attacks on Jews in American streets was made possible because of lucrative sponsorships from Ford Motor Company on ABC, Hyundai on CBS, and Progressive on NBC. Their contact information is linked so you can tell them about the biased news they fund.