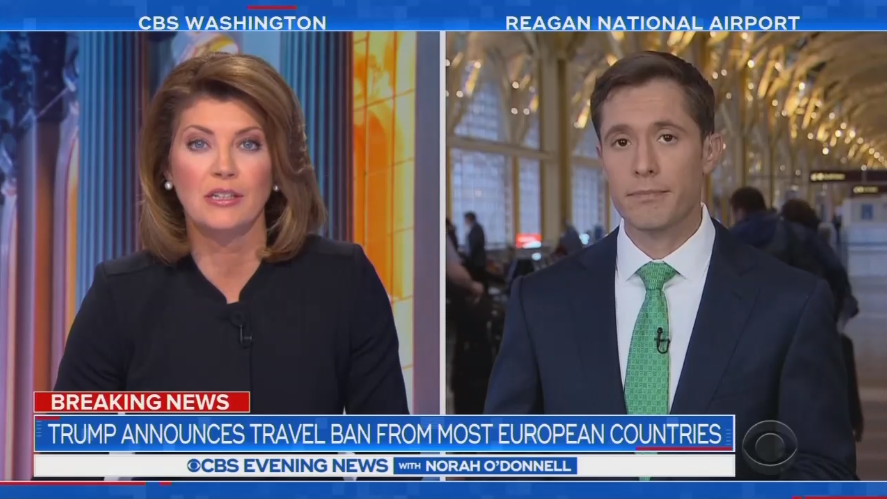 It’s was whiplash on CBS Evening News as they went with one narrative to bash President Trump on Wednesday, only to turn around on Thursday to hit him from the other side. The narrative switcheroo came as the network used the congressional testimony of the nation’s top immunologist to suggest Trump wasn’t doing enough to limit those infected with the coronavirus from coming into the country. The very next day, CBS was up in arms about the new travel ban from Europe and questioned if corrective measures were too late.

The first two clips in the video below were from the Wednesday (March 11) broadcast of the CBS Evening News. Those clips showed Dr. Anthony Fauci telling Congress: “If we are complacent and don't do really aggressive containment and mitigation the number could go way up and be involved in many, many millions.” In addition, White House correspondent Weijia Jiang noting this:

JIANG: Fauci was asked how the administration plans on controlling the outbreak.

FAUCI: How much worse we'll get will depend on our ability to do two things: To contain the influx of people who are infected coming from the outside, and the ability to contain and mitigate within our own country.

What Fauci was obviously calling for was some kind of travel ban that would stop infected people from entering the country while the administration dealt the domestic outbreak. The segment was designed to decry the President’s response to the outbreak and suggest the address to the nation (before it was delivered) as just “damage control” by the White House.

Come Thursday, however, the narrative was turned on its head (the last two clips in the video). In the President’s address the night before, he announced a new travel ban from Europe with the goal of limiting the infected passing into the U.S. And CBS was not standing for it.

“President Trump's ban on some travel from Europe announced in Wednesday night's Oval Office address has led to confusion from U.S. carriers, a backlash from U.S. allies, and panic at European airports,” anchor Norah O’Donnell proclaimed.

A short time later, CBS senior national security analyst Fran Townsend ripped the effectiveness of the travel ban. “Travel bans are most effective before there is a widespread infection next rate inside the borders of the country. And so this sort of travel restriction would have been most effective earlier on,” she argued before adding, “but it's not meaningless.”

CBS’s messaging got stranger when, later in Thursday's show, O’Donnell spoke one-on-one with Fauci, who was at the White House. At no point did she ask him about his calls for a travel ban. But she did ask him to talk about how our system for testing for the virus was “failing.”

O’Donnell may not have gotten the answer she was looking for because Fauci explained that the system was in the process of being corrected. “That system now is going to be up and running I would imagine really quite soon, probably in a week,” he said. “Will that be too late,” she shot back. Fauci calmly told her it wasn’t:

No, I don't think too late. But what we can do right now is the kind of, what we call both containment and mitigation. Those are the things you do to stop spread. So, therefore I don't like the say it's too late. It's certainly not too late.

That sounded just like the kind of containment he was calling for on Wednesday when he was urging for a travel ban.

NORAH O’DONNELL: And that includes the prime-time address to the nation tonight by the President. Mr. Trump has spoken publicly about the coronavirus almost daily, but this would mark the first time in such a formal setting from the Oval Office. And it underscores the gravity of today's developments. Weijia Jiang reports tonight from the White House.

WEIJIA JIANG: Tonight, damage control at the White House. Top health officials were summoned to a last-minute meeting with President Trump as he prepared to address the nation and reassure the public the government has a handle on the coronavirus. This, as the market crashed once again over fears of the virus, closing down nearly 1,500 points.

PRESIDENT DONALD TRUMP: Now we're hitting a patch, and we're going to have to do something.

JIANG: The nation's top expert on infectious diseases issued his starkest warning yet:

DR. ANTHONY FAUCI: If we are complacent and don't do really aggressive containment and mitigation the number could go way up and be involved in many, many millions.

JIANG: Concerned members of Congress said they appreciated Dr. Anthony Fauci's honesty, but slammed the President for endangering their constituents.

REP. GERRY CONNOLLY (D-VA): This administration was not prepared for this crisis, and it put lives at risk, American lives!

REP. CAROLYN MALONEY (D-NY): The Trump administration's testing for the coronavirus has been severely inadequate.

JIANG: Fauci was asked how the administration plans on controlling the outbreak.

FAUCI: How much worse we'll get will depend on our ability to do two things: To contain the influx of people who are infected coming from the outside, and the ability to contain and mitigate within our own country.

JIANG: CBS News has learned that the administration is considering issuing new travel restrictions for Americans going to and from Europe. President Trump says he will address possible changes and whether he will declare a national emergency when he talks tonight. Norah.

O’DONNELL: And Weijia, what Kessel we expect from the President's speech tonight?

JIANG: Well, the President says this is a time for unity and strength as the entire world fights against the common enemy of coronavirus. And he insists that nothing matters more to him than the safety and health of Americans. But, of course, critics say those are just words. So, he's going to have to really lay out a plan for how he plans to contain this, and he says he does have one when it comes to both public health and the economy.

O’DONNELL: All right, Weijia, thank you.

NORAH O’DONNELL: President Trump's ban on some travel from Europe announced in Wednesday night's Oval Office address has led to confusion from U.S. carriers, a backlash from U.S. allies, and panic at European airports. Kris van Cleave is standing by at Reagan National Airport outside Washington. And Kris, so many people are wondering, how are these restrictions going to work?

KRIS VAN CLEAVE: Well, Norah, we're all going the find out late tomorrow night when they go into effect, but these new restrictions caught a lot of people by surprise, including European leaders, and Americans traveling overseas. And there was confusion, because at least initially it wasn't exactly clear what action the White House was taking.

Crowds and chaos at European airports as Americans fear being stranded abroad, and this startling image from Paris, a couple wearing industrial masks with a sea of fellow passengers around them.

UNIDENTIFIED WOMAN: Definitely been like a lot of uncertainty, which has caused a lot of like panic.

CLEAVE: Panic after the President said this last night.

PRESIDENT DONALD TRUMP: We will be suspending all travel from Europe to the United States for the next 30 does.

CLEAVE: But not exactly. The regulations only apply to non-U.S. citizens who have traveled to 26 European countries in the last 14 days. That's most of Europe. The United Kingdom is exempt, and Americans can continue European travel, but will be screened upon returning and asked to self-quarantine two weeks. President Trump shrugged off the backlash from European leaders.

TRUMP: We get along very well with European leaders, but we had to make a decision and I didn't want the take time.

FRAN TOWNSEND: Travel bans are most effective before there is a widespread infection next rate inside the borders of the country. And so this sort of travel restriction would have been most effective earlier on, but it's not meaningless.

CLEAVE: The State Department is now urging all Americans to reconsider any travel abroad, and the President was asked about the possibility of domestic flight restrictions here in the U.S. He said that's not something they have talked about yet, but he didn’t rule it out. Norah.

O’DONNELL: All right, Kris. Thank you.

NORAH O’DONNELL: We want to bring in Dr. Anthony Fauci. He's the country's top expert on infectious diseases and has served as scientific adviser for every president since Ronald Reagan. Dr. Fauci, good to see you. Thank you for joining us.

DR. ANTHONY FAUCI: Good to be with you.

O’DONNELL: I want to ask you about what you said today before Congress, that our system is failing. How so?

FAUCI: What I was referring to at the hearing was that the system of testing was originally designed for a doctor-patient type of interaction where you go into a doctor's office or a clinic with symptoms and the reason you want a test is either you've been exposed or you have symptoms. That goes to a public health laboratory that the CDC made the test for. It works very well for that, but what it doesn't work for is if you want to do broad, blanket type of screening to answer the question that so many people are asking, how many people in this country are infected. That system now is going to be up and running I would imagine really quite soon, probably in a week.

O’DONNELL: Will that be too late?

FAUCI: No, I don't think too late. But what we can do right now is the kind of, what we call both containment and mitigation. Those are the things you do to stop spread. So, therefore I don't like the say it's too late. It's certainly not too late.

O’DONNELL: We had a viewer write in that her sister has a low-grade fever, she has a cough, but the doctor won't test her for coronavirus because she doesn't meet the "Government standards." What are the standards and why can't she get a test?!

FAUCI: Well, I must tell you, Norah, for sure that that is a misunderstanding of what the standards are. The standards used to be more stringent. They are much more relaxed right now.

O’DONNELL: Are you sure that message is getting to doctors?

FAUCI: Well, obviously it may not be because you're giving me an example of how that message didn't get out. I think we need do a better job of getting that message out. Hopefully my talking to you today will be going a step in that direction to get that message out.

O’DONNELL: We know the symptoms of COVID-19 are dry cough, fever, and shortness of breath. If someone has those symptoms, should they go to the emergency room?

FAUCI: No. Thank you for the question. They should stay home, call their healthcare provider, call their physician, or even call the emergency room and say, “these are symptoms that I have had. I'm staying home. What can I do to get a test?” And then you will get instructed about what the proper, safe way to do that.

O’DONNELL: Dr. Fauci, America has changed so rapidly in the last week, when is life going to get back to normal? How long is this going to last?

FAUCI: You know, Norah, we don't know how long it lasts. If you look at what's happened in China, they went way up, and they're starting to come right down now. The Korea curve is peaking. It's starting to kind of flatten out. So, you usually measure in matter of several weeks to a couple of months.

O’DONNELL: Well, Dr. Fauci, good luck with all your efforts and thank you so much for the information.

FAUCI: Good to be with you, Norah.