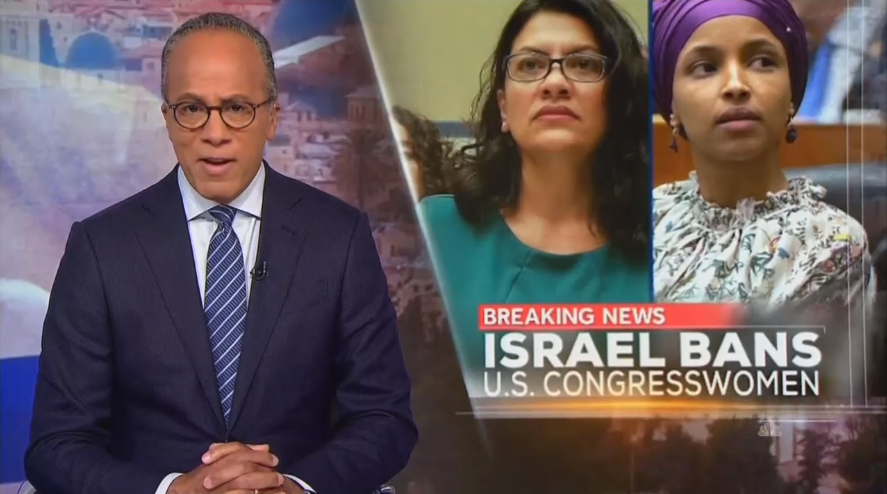 Citing an itinerary that proved they were out to “deny Israel’s legitimacy,” Israeli Prime Minister Benjamin Netanyahu announced on Thursday that anti-Semitic U.S. Representatives Ilhan Omar (D-MN) and Rashia Tlaib (D-MI) were barred from entering the country. Of course, the liberal media had an absolute meltdown with the flagship evening programs of ABC, CBS, and NBC rushing to the Congresswomen’s defense, while covering up their deep-seated anti-Semitic worldviews.

In a series of tweets, Netanyahu exposed how they “received their itinerary for their visit in Israel, which revealed that they planned a visit whose sole objective is to strengthen the boycott against us and deny Israel’s legitimacy.”

He added: “[T]hey listed the destination of their trip as Palestine and not Israel, and unlike all Democratic and Republican members of Congress who have visited Israel, they did not request to meet any Israeli officials, either from the government or the opposition.”

But those facts be damned as the liberal media assailed Trump and Israel.

Senior national correspondent Terry Moran was playing up the dramatics when he exclaimed about President Trump’s “Twitter hammer” in urging Israel to bar the anti-Semites. He talked about Trump called the Reps a “disgrace” but refused to mention any anti-Semitic incidents, such as Omar once claiming “Israel has hypnotized the world.”

CBS Evening News also seemed to suggest the fact that the two were “the first and only Muslim Congresswomen” played a role in the decision. Senior foreign affairs correspondent and Face the Nation moderator Margaret Brennen disappointingly ignored Omar and Tlaib’s anti-Semitism while touting outrage from Democrats:

Netanyahu cited the Congresswomen's support for a boycott of Israel for what they say is abuse of Palestinian rights. Congresswoman Omar said Israel was undermining “democratic values” and accused the President of being an “Islamophobe”. Tlaib posted a picture of her Palestinian grandmother and sailed the decision was a sign of weakness. Their colleague, Minnesota Congressman Dean Philipps, said Israel's decision was appalling.

She went on to claim, with no evidence, that the reason Netanyahu went along with banning them was that he was in an election.

As for NBC Nightly News, White House correspondent Peter Alexander was more blatant in his defense of the Reps’s anti-Semitism. After reading a tweet from the President regarding how “they hate Israel and all Jewish people,” Alexander countered by noting those were “attacks both women have rejected.”

But compare that with how Alexander talked about Trump in the same report. According to him, Trump had made blatantly “racist remarks.” Meanwhile, he reported that Omar “faced criticism” for comments others “called” anti-Semitic. He went out of his way to give Omar some deniability for her bigotry.

The facts of the matter were that both Congresswomen were raging anti-Semites. Tlaib once stated that thinking about the Holocaust gave her a “calming feeling” and lied about Palestinians helping to create Israel. That’s not to mention Tlaib’s involvement with an anti-Semitic/anti-Israel Facebook group.

The networks also omitted how Israel’s decision to bar Tlaib (specifically) wasn’t entirely final. In an olive branch of a tweet, the PM’s office let it be known that if she “submits a humanitarian request to visit her relatives, the minister of interior has announced that he will consider her request on the condition that she pledges not to act to promote boycotts against Israel during her visit.”

TERRY MORAN: President Trump today, in an unprecedented use of the powers of his office, pressuring Israel to deny entry to two of his political enemies, Congresswomen Ilhan Omar of Minnesota and Rashida Tlaib of Michigan.

MORAN: Trump brought down his Twitter hammer this morning, firing off this message, "It would show great weakness if Israel allowed Rep. Omar and Rep. Tlaib to visit. They are a disgrace!" Hours later, Israeli Prime Minister Benjamin Netanyahu complied, canceling the official visit of the two elected American officials, declaring in a statement, "Their intent is to hurt Israel."

Both Omar and Tlaib criticize Israeli policies concerning the Palestinians and support movements to boycott Israel. But this was a stunning moment.

MORAN: Both Congresswomen have become targets of the President and his supporters.

MORAN: Today, Congresswoman Omar issued a statement of her own, "Trump's Muslim ban is what Israel is implementing, this time against two duly elected members of Congress."

NORAH O’DONNELL: Late today, President Trump defended Israel's decision to bar two members of the U.S. Congress from entering the country, the first and only Muslim Congresswomen. Democrats Rashida Tlaib of Michigan, and Ilhan Omar of Minnesota. Not surprising since as Margaret Brennan tells us the unprecedented action by Israel came in response by an also unprecedented request to the President himself.

MARGARET BRENNAN: President Trump said he urged the Israeli government to ban the two first Muslim Democratic Congresswomen from entering that country. Israeli Prime Minister Benjamin Netanyahu, a close friend of Mr. Trump, made the decision just hours after the President said, "It would show great weakness if Israel allowed representative Omar and representative Tlaib to visit. They hate Israel and all Jewish people."

Netanyahu cited the Congresswomen's support for a boycott of Israel for what they say is abuse of Palestinian rights. Congresswoman Omar said Israel was undermining “democratic values” and accused the President of being an “Islamophobe”. Tlaib posted a picture of her Palestinian grandmother and sailed the decision was a sign of weakness. Their colleague, Minnesota Congressman Dean Philipps, said Israel's decision was appalling.

BRENNAN: Israel previously said the Congresswomen would be allowed to visit, but in an unprecedented move, President Trump punished his political opponents by urging a U.S. ally to block them. No member of Congress has ever been banned from visiting Israel. Dan Shapiro was U.S. Ambassador to Israel.

DAN SHAPIRO: What's hard to understand exactly what changed in last three or four weeks, other than pressure from President Donald Trump, because of his decision to treat these members of Congress as foils for his brand of divisive racist politics.

O’DONNELL: Margaret Brennan joins us here tonight. So, just a few weeks ago, the Israelis said that these members of Congress could enter. So what changed?

BRENNAN: Well, there are a few things. President Trump has been in this months-long fueled with the so-called "Squad" these controversial freshmen Democrats. And he says that they are the face of the Democratic Party. For Prime Minister Netanyahu, it's also about politics at home, because he is a month away from a really tough election, and one of the things he has campaigned on is the strength of his relationship with President Trump. So, to be publicly pressured like this, he had to say yes.

LESTER HOLT: Hours after a tweet from President Trump, Israel today barred two U.S. congresswomen from entering that country. They're the first Muslim women elected to Congress. They were first targeted by the President last month. Peter Alexander reports.

PETER ALEXANDER: Tonight President Trump insisting he had nothing to do with Israel's decision to bar two Democratic congresswomen from entering the country.

ALEXANDER: The Israeli announcement just hours after receiving unusual pressure from an American president. Tweeting that allowing a visit from Ilhan Omar and Rashida Tlaib “would show great weakness. They hate Israel and all Jewish people.” Attacks both women have rejected.

Last month the Israeli Ambassador said the women would be allowed to travel but now the government says they were denied under Israeli law. Because they support a controversial boycott of Israel.

Tonight Omar calling the decision “an affront that Israeli Prime Minister Netanyahu, under pressure from President Trump would deny entry to representatives of the U.S. Government.” Tlaib, the daughter of Palestinian immigrants posting a picture of her grandmother in the West Bank calling Israel's action “a sign of weakness”.

ALEXANDER: It's the latest showdown between the President and those Democrats, who along with two other freshman Congresswomen, have been frequent Trump targets. The President recently facing a bipartisan rebuke for his racist remarks calling for them to “go back” where they came from.

ALEXANDER: But Omar has also faced criticism including from some Democrats for comments they've called anti-Semitic.

The President is likely to bring it all up in his campaign rally in New Hampshire tonight. Meanwhile, House Speaker Nancy Pelosi is calling on Israel to reverse its decision and slamming the President's statements as a sign of ignorance and disrespect. Lester.