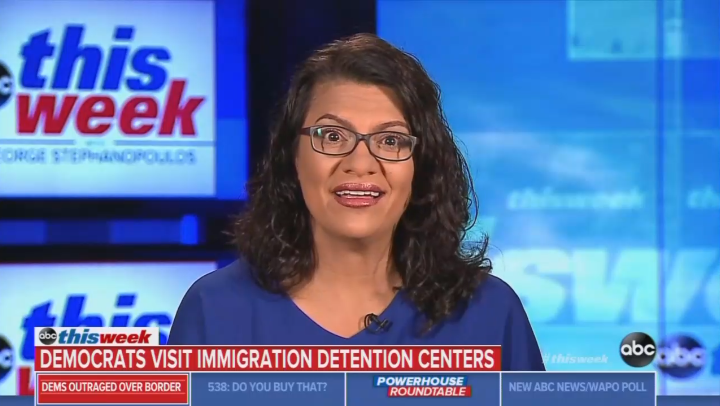 Last week, the liberal media pounced on a report that a private Facebook group allegedly made up of former and current Customs and Border Protection officials existed and was filled with questionable posts about migrants and members of Congress.

ABC chief foreign affairs correspondent Martha Raddatz got her chance to question acting Homeland Security Secretary Kevin McAleenan about the group during Sunday’s This Week. But while she grilled McAleenan on that Facebook group, which he was not involved in, she failed to question Congresswoman Rashida Tlaib (MN) about her personal involvement in a disturbing anti-Semitic Facebook group called “Palestinian American Congress”.

Several minutes into their interview about the crisis at that border and CBP’s struggle to keep up with the flood of illegal immigrants, Raddatz shifted to pressing McAleenan on the Facebook group reportedly called “10-15”, which reports claimed was the radio call for border crossers in custody:

Let’s turn to the private Facebook groups with offensive content. We can’t so most of it because it is so bad. It is allegedly associated with CBP agents. You have said the agency is going to look into that. ABC and others have reported that CBP leadership was aware of at least one group as far back as February of 2018. You’ve served as acting commissioner since January 2017, were you aware of this so-called “10-15” group?

At one point Raddatz seemed to suggest that CBP actually had control of the group. “Why wasn't the website shut down? Why wasn't that Facebook page shut down, should it have been,” she demanded to know. “So, CBP does not control this Facebook page. This is a group of individuals on their off duty--,” McAleenan began to respond before Raddatz cut him off.

A few minutes later, Tlaib was Raddatz’s next guest and was allowed to smear CBP and Border Patrol with impunity. At one point, the ABC fill-in host invited Tlaib to double down on the left’s insane claim that migrant holding facilities were “concentration camps”. “Do you agree with that comparison?”

“Absolutely. I mean, there are a number of experts who say it. Because it's traumatic,” Tlaib exclaimed with a weird smile on her face.

According to our friend, Peter Hasson over at the Daily Caller, “Tlaib is a member of the Facebook group ‘Palestinian American Congress,’ where members often demonize Jews. The group’s founder, Palestinian activist Maher Abdel-qader, was a key fundraiser for Tlaib and organized campaign events for her around the country.”

“In January 2018, Abdel-qader shared an anti-Semitic video that claimed Jews aren’t actually Jewish, and invented their historical claim to Israel and secretly control the media,” he went on to report. “Tlaib has been a member of the Facebook group since February 2018 when Abdel-qader added her, according to Facebook.”

And as of last month, Hasson reported that “Tlaib has continued attending events and posing in pictures with one of her campaign fundraisers who repeatedly shared anti-Semitic conspiracy theories.” Abdel-qader was that person.

It seemed that Raddatz only found some questionable Facebook groups distasteful and the ones favorited by Democrats got a free pass.

MARTHA RADDATZ: Let’s turn to the private Facebook groups with offensive content. We can’t so most of it because it is so bad. It is allegedly associated with CBP agents. You have said the agency is going to look into that. ABC and others have reported that CBP leadership was aware of at least one group as far back as February of 2018. You’ve served as acting commissioner since January 2017, were you aware of this so-called “10-15” group?

KEVIN MCALEENAN (Acting Homeland Security secretary): I was not aware of this group.

RADDATZ: Do you know if your leadership was?

MCALEENAN: So, I have been made aware that we had an allegation in 2016 that investigated, followed up on, and the discipline was metered out on an agent that made an offensive post on the website.

MCALEENAN: So, CBP does not control this Facebook page. This is a group of individuals on their off duty--

RADDATZ (Cutting McAleenan off): Did the word go out to other agent or just that particular--

MCALEENAN: Actually, we did put out a policy on being careful on social media the responsibility to maintain your standards, and apply with a code of conduct even in your private life, even in your personal views.

What can I tell you about this set of posts, as soon as they came to light, I directed an immediate investigation. It had already been reported to our inspector general. They were already looking into it. We’ve already put several agents on administrative duties, we’ve issued cease and desist letters to more. And this investigation is continuing and the agents will be held accountable. If they’re CBP employees who did inappropriate things. I don't think it's reflective of the men and women we have –

RADDATZ (Cutting McAleenan off again): And I want to move quickly to the ICE raids.

RADDATZ: Alexandria Ocasio-Cortez, your colleague, who was at the border with you, compared the facilities to a concentration camp. Do you agree with that comparison?

REP. RASHIDA TLAIB: Absolutely. I mean, there are a number of experts who say it. Because it's traumatic! I mean, I don't know how to explain to people what we saw. When we're explaining to people and they’re kind of looking back at us and saying, “that can't be true”. I said, “But we were all there.” You have Congressman Castro, Melony, Norma, all of us were there. We saw what we saw and we heard from folks who were in the facilities. And some of them have not seen their children since being there.

What you need to also know, do you know the mere touch the mere, even me holding the hand, broke them down in tears? That tells you they're under a lot of trauma. That they are in a facility that is dehumanizing. And this is choice by the current administration. They are choosing not allowing asylum seekers to go through the legal process.