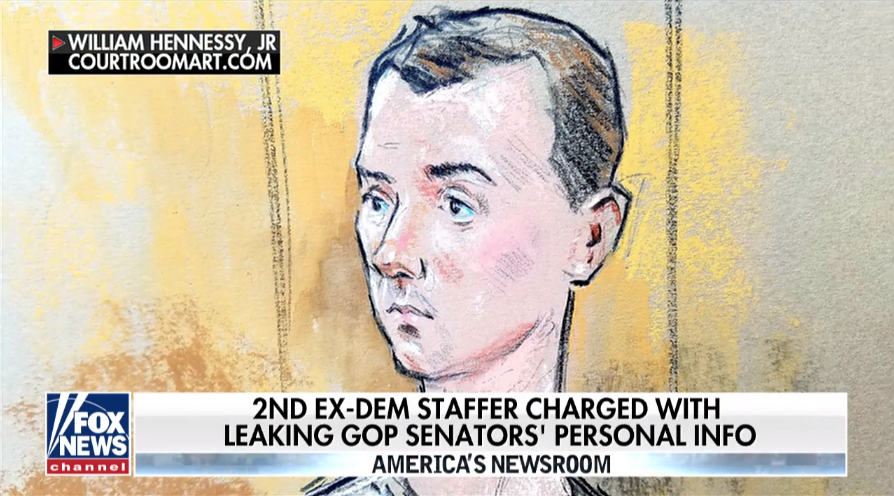 Now-ex-staffer Jackson Cosko was sentenced to four years in prison on Wednesday on five felony counts. And in over 24-hours since the sentencing, none of the major broadcast networks (ABC, CBS, and NBC) covered it on their flagship morning and evening newscasts.

It was the same act from early October, 2018 when they ignored Cosko’s arrest by Capital Police and ignored his guilty plea in early April of this year. During the hearing, he doxed Senators Orrin Hatch (former-UT), Lindsey Graham (SC), and Mike Lee (UT) by putting their personal information on Wikipedia. A short time later, he did the same for Senate Majority Leader Mitch McConnell (KY) and Senator Rand Paul (KY).

Not only did Cosko illegally dox those Senators, he repeatedly burglarized Senator Hassan’s office.

“In April, Cosko pleaded guilty to five felonies, admitting that after being fired last year from his work as a systems administrator on Hassan’s staff, he repeatedly used a colleague’s key to enter the office, install keylogging equipment that stole work and personal email passwords, and downloaded a massive trove of data from Senate systems,” reported Politico.

According to the sentencing memo, and reported on by Law & Crime, the scale of Cosko’s crimes was prolific and resulting in five felonies (Click “expand”):

The defendant has pleaded guilty to carrying out a months-long series of burglaries and sophisticated data theft offenses directed at the office of United States Senator Maggie Hassan; to a separate set of “doxxing” offenses through which he maliciously released personal information of Senators Lindsay Graham, Orrin Hatch, Mi, Rand Paul, and Mitch McConnell; and to obstruction of justice, because he attempted to silence a witness by threatening to release the private health information of a Senator’s children, because he corrupted another person and persuaded her to attempt to “wipe down” the scene of his burglaries, and because he attempted to destroy evidence in his own apartment. The defendant ultimately pleaded guilty to five felony counts.

“[T]he defendant obtained and took dozens of means of identification (including network login credentials) belonging to at least six employees of the Office of Senator Hassan – that is, his conduct constituted numerous instances of identity theft. The defendant also surreptitiously installed ‘keylogger’ devices on at least six computers in Senator Hassan’s Office,” the memo continued.

Cosko’s crimes were truly villainous and the judge was deeply disturbed by them. “We have a society that has become very vicious,” U.S. District Court Judge Thomas Hogan said to Cosko. “It’s very concerning to the court and unfortunate that you played into that.”

But that wasn’t enough to stir ABC, CBS, and NBC. Instead of reporting on Cosko’s sentencing, ABC and CBS both gawked at accused sexual harasser Roy Moore and his latest attempt to become an Alabama senator. Both CBS and NBC reported on a study that suggested that smartphone use was causing young people to grow “horns” on the back of their heads.