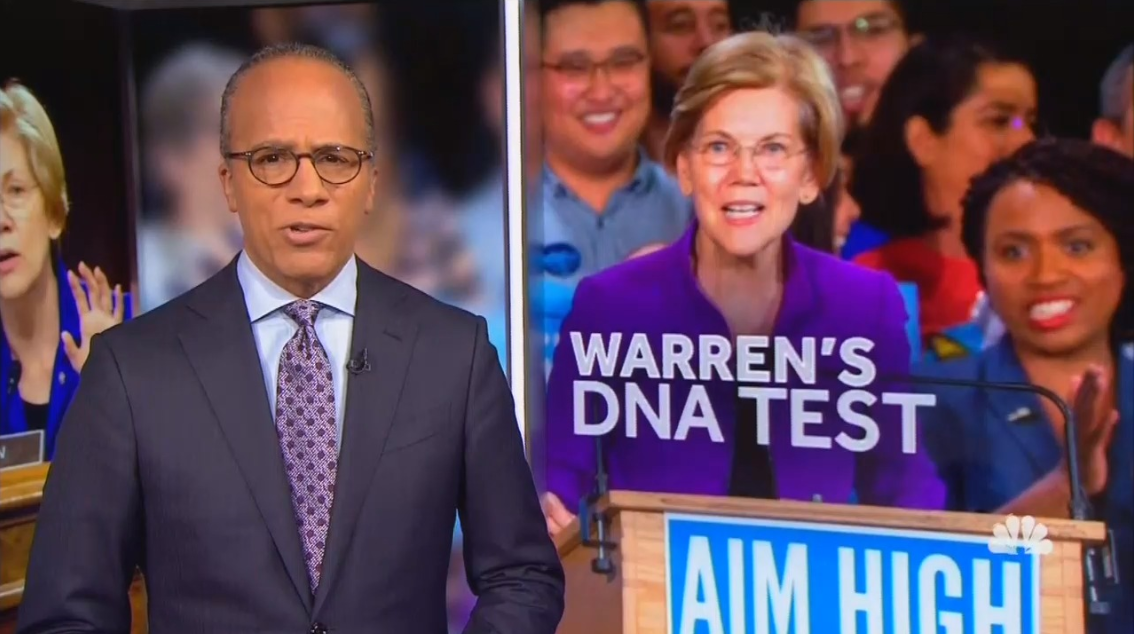 What was supposed to be a rebuke of President Trump’s ridicule ended up drawing more laughs from most and scorn from others. In an overly dramatized campaign video out Monday, Democratic Senator Elizabeth Warren (MA) released the results of a DNA test that suggested she did have a Native American ancestor.

The catch? It’s possible she was only 1/1,024th Native American. Despite that fact, the liberal broadcast networks (ABC, CBS, and NBC) promoted her campaign message and portrayed her as the victor.

On NBC Nightly News, they were eager to prove that it was somehow a terrible day to be President Trump. “Now to Senator Elizabeth Warren doing something unprecedented after years of ridicule from President Trump and Republicans over her claims of Native American ancestry,” declared anchor Lester Holt.

NBC White House correspondent Kristen Welker touted how Warren supposedly “calling his bluff” with her announcement. “Warren firing back, tweeting President Trump is attacking her because he's scared, as she looks ahead to her next political chapter,” Welker gushed after spending her entire report making it sound as though Trump was on the defensive.

Besides bringing back the ridiculous claim that calling Senator Warren “Pocahontas” was a “racial slur,” ABC kept harping on a bet Trump made at a rally for her to prove her heritage. “President Trump, who calls her ‘Pocahontas’, has suggested he would pay $1 million to a charity if she took a DNA test to prove her heritage. Tonight, she says it’s time to pay up,” proclaimed sensationalist anchor David Muir during World News Tonight.

What went unreported by the networks was the fun statistic that showed that since Warren could have between 1/64th and 1/1,024th Native American DNA, it meant her mix could be below average for White people. According to a New York Times report form 2014: “The researchers found that European-Americans had genomes that were on average 98.6 percent European, .19 percent African, and .18 Native American.” Warren had as low as .098 percent Native American DNA or about half the average.

But that didn’t stop ABC from acting as though it was a boon for her and her likely 2020 campaign. “Warren was told she had a Native American ancestor in the range of six to ten generations ago. But tonight, the President is scoffing at the results,” huffed ABC congressional correspondent Mary Bruce. “Well David, her team says this is simply an effort to clear the air, to be transparent, but the timing of all of this leaves no one with much doubt.”

Bruce also claimed “there is no evidence” Warren used her heritage to “advanced her career”. But that was false since during her time at Harvard University she was labeled as a minority. That’s not to mention that Warren was clearly using it to advance her presidential ambitions. 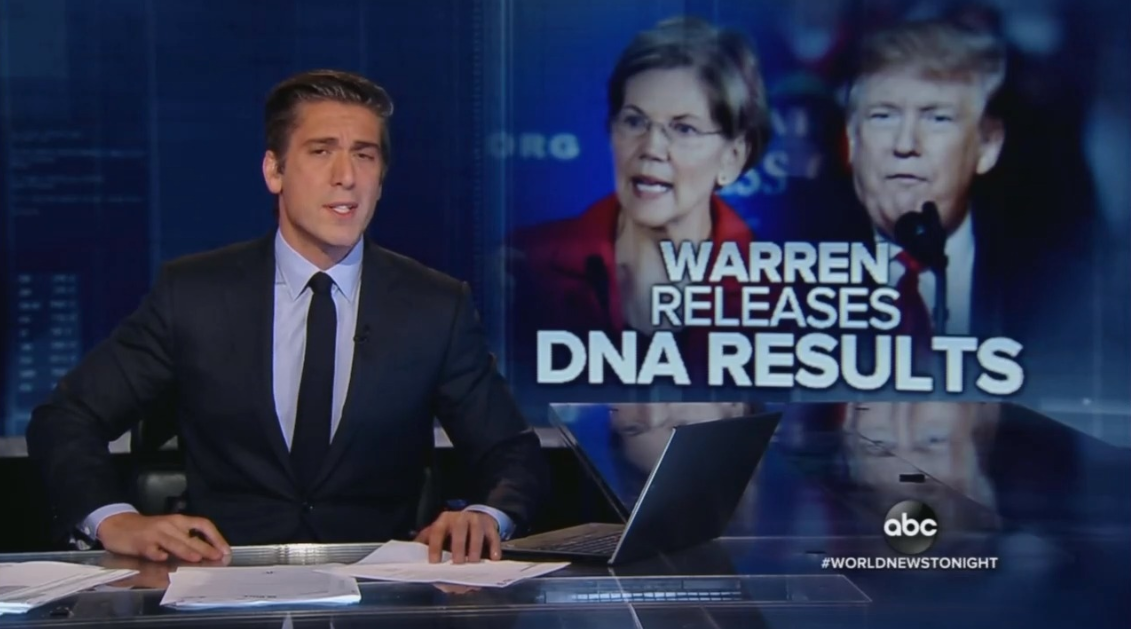 While the networks were trying to paint Warren’s announcement as just a result of Trump’s attacks, there was no critical examination of her previous claims and particularly her tall tale of how her parents had to elope because her father’s family was opposed to him marrying a Native American. Given how far back the ancestor lived (by some estimates they would have ironically lived at the time of Pocahontas), it’s hard for that story to hold water.

The networks were so disgustingly in the tank for Senator Warren that all three ignored the scathing rebuke by the Cherokee Nation. In a press release out hours before the nets went to air, the nation blasted Warren’s stunt, declaring:

A DNA test is useless to determine tribal citizenship....Using a DNA test to lay claim to any connection to the Cherokee Nation or any tribal nation, even vaguely, is inappropriate and wrong....It makes a mockery out of DNA tests and its legitimate uses while also dishonoring legitimate tribal governments and their citizens, whose ancestors are well documented and whose heritage is proven....Senator Warren is undermining tribal interests with her continued claims of tribal heritage.

Possibly realizing how ridiculous boasting about Warren would be, CBS went from hyping the findings on CBS This Morning to relegating it to their headlines segment on the CBS Evening News. For that segment, they played soundbites from CNN and Fox News reading the news.

DAVID MUIR: Well, tonight, three weeks before the crucial midterm elections, but there is a major headline that could involve a candidate for 2020. Massachusetts Senator Elizabeth Warren has already said she will give serious thought to a run in 2020. President Trump, who calls her “Pocahontas”, has suggested he would pay $1 million to a charity if she took a DNA test to prove her heritage. Tonight, she says it’s time to pay up. Here's Mary Bruce.

MARY BRUCE: His opponents say it's a racial slur, but President Trump relishes his nickname for Senator Elizabeth Warren.

BRUCE: Trump seizing on Warren's claim that she is part Native American. Even once leveling this challenge

DONALD TRUMP: I will give you $1 million dollars to your favorite charity, paid for by Trump, if you take the test and it shows you're an Indian.

BRUCE: Trump claims that Warren used her heritage to help her get ahead. But there is no evidence it advanced her career. Still, today, the Massachusetts Senator, who’s eyeing a 2020 White House run, took up the President's challenge, releasing this video showing her receiving the results of a DNA test.

SEN. ELIZABETH WARREN: What do the facts say?

UNIDENTIFIED MAN: The facts suggest that you absolutely have a Native American ancestor in your pedigree.

BRUCE: Warren was told she had a Native American ancestor in the range of six to ten generations ago. But tonight, the President is scoffing at the results.

UNIDENTIFIED REPORTER: Do you owe her apology.

BRUCE: As for that million dollar offer --

TRUMP: I will only do it if I can test her personally. Okay, that will not be something I enjoy doing either.

MUIR: Mary Bruce, live tonight from Washington. And Mary, Elizabeth Warren, as I mentioned, said she will decide after the midterms if she’s going to run for president, but today’s move and the fact that she diving in here, clear signs she's seriously considering this.

BRUCE: Well David, her team says this is simply an effort to clear the air, to be transparent, but the timing of all of this leaves no one with much doubt. Though many Democrats say they wish she would have waited until after the midterms to make a public splash.

GAYLE KING: The Boston Globe reports Democratic Senator Elizabeth Warren released DNA test results that reportedly show that her great, great, great grandmother was at least partially Native American. The Globe says the analysis by a Stanford University professor provides “strong evidence” that Warren had a native American in her family tree six to ten generations ago. President Trump, as you may have heard, has mocked Warren's claims that she's of Native American decent calling her Pocahontas.

JACQUI HEINRICH [Fox News]: The report indicates that Senator Warren's Native American ancestor is between six and ten generations back.

LESTER HOLT: Now to Senator Elizabeth Warren doing something unprecedented after years of ridicule from President Trump and Republicans over her claims of Native American ancestry. Today the Massachusetts Democrat released results of a DNA test she says proves it. As Kristen Welker explains, it fueling speculations she'll run for president in 2020.

WELKER: Warren now answering. Her campaign releasing a DNA analysis stating there is “strong evidence” the Senator had Native American in her family going back 6-10 generations. Today, President Trump was dismissive.

WELKER: And asked if he sees it as a sign Warren is serious about challenging him in 2020.

TRUMP: I hope she's running for president because I think she’d be very easy.

WELKER: Warren's move comes after the President posed a hypothetical scenario where he mused about squaring off with Warren in a debate saying he would ask her to prove her bloodline.

WELKER: This morning, denying he's on the hook for any donation.

WELKER: And later today, while in Georgia, Mr. Trump clarifying there are some conditions.

TRUMP: I'll only do it if I can test her personally, okay? That will not be something I enjoy doing.

WELKER: And when the President was pressed on whether he owes Warren an apology for stereotyping her as Pocahontas.

TRUMP: She owes the country an apology.

WELKER: Late tonight, Warren firing back, tweeting President Trump is attacking her because he's scared, as she looks ahead to her next political chapter.